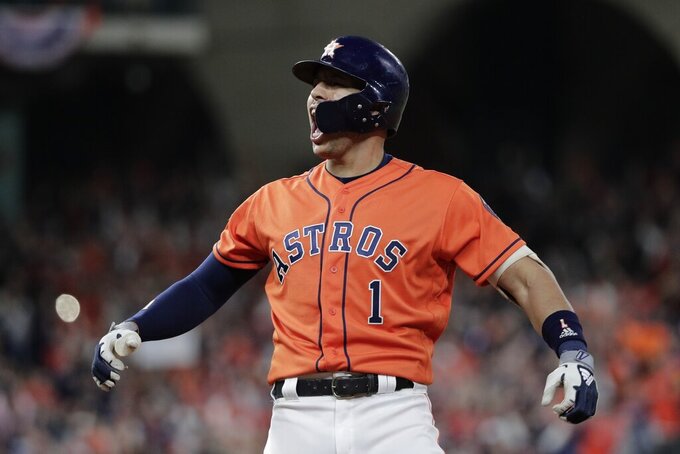 FILE - In this Oct. 30, 2019, file photo, Houston Astros' Carlos Correa reacts to his RBI-single during the fifth inning of Game 7 of the baseball World Series against the Washington Nationals in Houston. In May, Correa fractured a rib while he was having a massage in his home. At the time, the injury was expected to sideline him from four to six weeks. (AP Photo/David J. Phillip, File)

Sometimes the general managers and player personnel directors on Mount Olympus look down on some lucky soul and declare: This is your moment.

Consider Dale Cohen, a 62-year-old shift worker at a plastics company and a golfer from Findlay, Ohio. He made two holes-in-one in the same round. The Courier newspaper reports he used an 8-iron both times on a rainy, windy day. The odds of two aces in the same round are estimated at 67 million to 1.

Then again, the executives on Mount Olympus are a fickle bunch. Houston Astros shortstop Carlos Correa was having a massage in his home and wound up with a fractured rib. The massage New England Patriots owner Robert Kraft was having in a Florida shopping mall also didn’t work out so well, although his ribs remained intact.

Sports in 2019 took us to unexpected venues: The Vatican formed a track team, complete with nuns and Swiss Guards, although Scripture reminds that the race is not to the swift; the world’s No. 1 bridge player was suspended for failing a drug test; and a French basketball player in China was fined not for taking a knee during the Chinese anthem but for not casting his eyes on the flag.

By turns, it was a year that could be baffling, enriching and icily satisfying.

At the Tour de France, world time trial champion Rohan Dennis simply vanished during the first stage in the Pyrenees. Afterward, near his team bus, he didn’t want to talk about it. Said team director Gorazd Stangelj: “We are also confused.”

Roger Federer has been the gold standard in tennis. Now this is more than metaphor. His face is to be minted on Swiss currency. He will be featured on one side of a 20 franc silver coin hitting a one-handed backhand.

In 2001, a Canadian Football League fan vowed to wear only shorts until his Blue Bombers won the championship. Mind you, this team is from Winnipeg. Chris Matthew withstood the prospect of frost bite for nearly two decades. His team finally won it all this season, and his wife is pleased. “Now,” he told CTV News, “if we need to go somewhere where pants are required, we can actually go there.”

There were other scrums and scrambles:

FROM RUSSIA, WITH SHOVE: It’s not easy being a referee, especially in Russia. The soccer club Akhmat Grozny used its public address system to insult the referee with an expletive, drawing cheers from the crowd. … The coach of the hockey team Amur Khabarovsk was furious over a penalty-kick call and threatened to set fire to the referee’s car. Coach Alexander Gulyavtsev was puzzled by the response to his comment. “I just said car. It’s not as if I said apartment.”

RICH MAN, POOR MAN: The scoreboard clock was not enough for Odell Beckham Jr. In the Cleveland Browns’ opener against Tennessee, the star receiver played while wearing a watch that retails for a cool $250,000. A day later, the league took issue with his accessorizing, citing a policy “prohibiting hard objects.” Beckham’s watch would more than pay the rent for Chicago Cubs minor leaguer Trevor Clifton. He lived this season in a 104-square-foot home he and his father built from a $200 camper bought online. But it’s got a couch, a fridge and a mattress, and it’s quiet. “I just like to be on my own,” he told The Des Moines Register. FRENCH PROJECTION: Clearly, the Seine wouldn’t do. Organizers of the 2024 Paris Olympics hope to hold the surfing competition more than 9,000 miles away in Tahiti. The French also want breakdancing on the Olympic roster, looking to entice a younger audience. Is breakdancing a “sport”? It sure is, says top breakdancer Mounir Biba. “I defy Cristiano Ronaldo to do just one of my movements,” he said.

WORD(IM)PERFECT: Words were a most dangerous game in 2019. Baseball traded its “disabled list” for the “injured list,” saying it doesn’t want to support the “misconception that people with disabilities are injured and therefore are not able to participate or compete.” … Canadian hockey authorities, intent on being an “inclusive brand,” dropped its longtime “midget” division in favor of age designations. … New York Jets cornerback Janoris Jenkins called a fan a “retard” on Twitter, insisting the expression was part of his “culture.” Two days later, he was part of another culture —- unemployed.

WAITER, HATER: An English Premier League goalkeeper was cleared of wrongdoing but cited for “lamentable” ignorance by supposedly giving a Nazi salute during a team dinner. Wayne Hennessey contended he does not even know what a Nazi salute is, and he was merely extending his arm to get the attention of a waiter. … Australian rugby star Israel Folau certainly knew what he was doing. His contract was terminated after his Instagram post in which he consigned to hell “homosexuals, adulterers, liars, fornicators, thieves, atheists, idolaters.” The governing body of Australian rugby condemned Folau for his anti-gay remarks but offered no opinion on drunks and fornicators.

Maybe the most eye-opening news came out of the University of Virginia. Tony Bennett, coach of the NCAA basketball champions, declined a pay raise. He told the school to give the money to his staff and other departments. He said he has more than enough money. It was as if he were speaking in tongues. Athletic director Carla Williams said this “just does not happen in our industry.”