Stacey Abrams to take to Georgia airwaves during Super Bowl 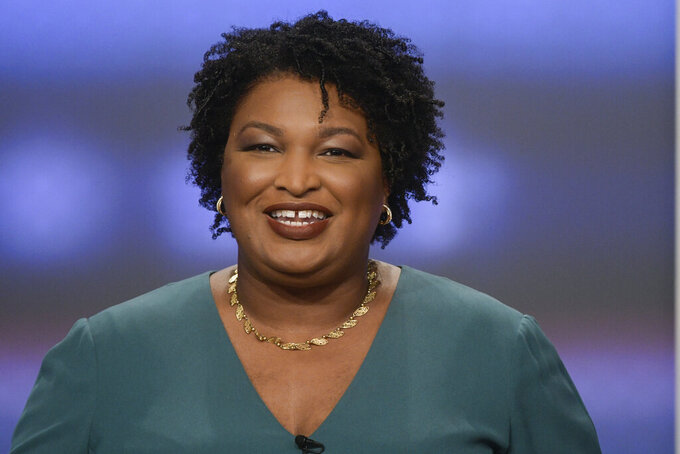 FILE - In this May 20, 2018, file photo, then-Georgia Democratic gubernatorial candidate Stacey Abrams participates in a debate in Atlanta. Abrams is an unusual and historic choice to deliver the opposition response to President Donald Trump’s State of the Union, but Democratic leaders are signaling their emphasis on black women and on changing states like Georgia. Abrams will be the first black woman to deliver an opposition response. (AP Photo/John Amis, File)

ATLANTA (AP) — Before Georgia Democrat Stacey Abrams delivers her party's rebuttal to President Donald Trump's State of the Union address, she'll take her voting rights campaign to the airwaves during the Super Bowl.

Abrams narrowly lost her November bid to become the first black woman to be elected governor, in a contest marred by disputes over ballot access and integrity. But she is still a rising star among national Democrats and is their top choice to run for a Georgia Senate seat in 2020.

"We don't agree on everything," says the Republican, Natalie Crawford.

"But we love Georgia," Abrams says, later adding, "Every vote should be counted, from every corner of our state."

Fair Fight is spending $100,000 on the initial ad buy in multiple markets beyond the more expensive metro Atlanta market. Digital ads will be targeted to metro Atlanta residents.

In the days after the November midterm election, Abrams considered challenging her loss to Republican Brian Kemp, alleging that he presided as secretary of state over an election rife with irregularities, leaving ballots uncounted and denying others the right to cast ballots at all. Kemp vehemently defended his performance as chief elections officer.

Abrams bowed out of the race without a formal concession, then started Fair Fight as a vehicle to maintain a public presence and raise awareness about voting rights issues in Georgia and nationwide.

That advocacy is among the reasons that Senate Minority Leader Chuck Schumer of New York asked Abrams to deliver Democrats' response to Trump's State of the Union two days after the Super Bowl. Schumer also is pushing Abrams to run against Republican Sen. David Perdue next year.

Abrams has been consulting with House Democrats on their first signature legislation of the new Congress, which would mean sweeping changes for how the U.S. conducts elections.

In Georgia, a commission that Kemp appointed when he was secretary of state has endorsed a new touch-screen system that prints ballot receipts. State lawmakers are considering the matter during their current session.

Advocates of hand-marked paper ballots note the system Kemp's panel backs could cost at least $100 million, more than triple what the paper ballot system could cost. Kemp hired as a top aide a former lobbyist for a private firm that sells the kinds of voting systems Kemp's commission recommended.