Stafford, Bridgewater both questionable for Lions-Panthers 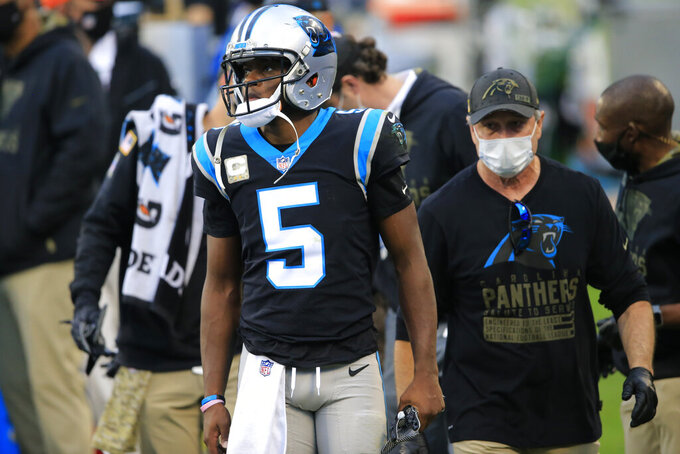 Carolina Panthers quarterback Teddy Bridgewater (5) walks off the field after being injured on a sack against the Tampa Bay Buccaneers during the second half of an NFL football game, Sunday, Nov. 15, 2020, in Charlotte, N.C. (AP Photo/Brian Blanco)

Detroit's Matthew Stafford and Carolina's Teddy Bridgewater are both questionable for Sunday's game between the Lions and Panthers — and aside from those two quarterbacks, several other players are dealing with injuries for the two teams.

Running back D'Andre Swift (concussion) and receivers Kenny Golladay (hip) and Danny Amendola (hip) were ruled out for Detroit on Friday. Carolina running back Christian McCaffrey (shoulder) is also missing this weekend's game.

Stafford, who has been dealing with a right thumb injury, was limited in practice Friday. Bridgewater was also limited with a right knee sprain, and coach Matt Rhule said he would be a game-time decision. If Bridgewater can't play, either Will Grier or P.J. Walker would start at quarterback. Rhule said he hadn’t decided who yet.

Bridgewater was hurt in his team's loss to Tampa Bay last weekend.

McCaffrey will miss his second straight game, and tackle Russell Okung is doubtful for Carolina after missing the past two games with a calf injury. Cornerback Donte Jackson (toe) and guard John Miller (ankle) are doubtful as well.

Stafford was able to finish Detroit's win over Washington last weekend. He missed practice Wednesday and was limited Thursday.

Swift is coming off an impressive game in which he had 81 yards rushing and 68 receiving, but the rookie won't be able to build on that right away.