Stafford-Kupp combo at its best in biggest moments 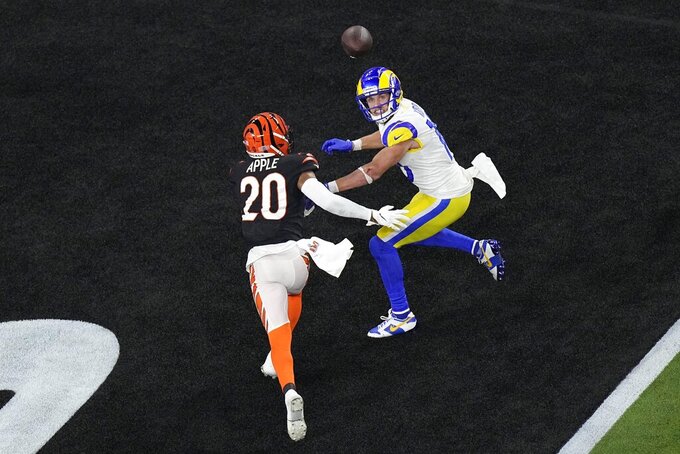 INGLEWOOD, Calif. (AP) — When the Super Bowl was on the line, the Los Angeles Rams knew who they trusted to win it.

Matthew Stafford and Cooper Kupp led the way on the game-winning drive that delivered the Rams the 23-20 win over Cincinnati on Sunday for their first championship in Los Angeles since the 1951 season.

Stafford completed all four passes he threw to Kupp on the game-winning drive for 39 yards, including the 1-yard TD toss that provided the winning score.

For the season, Stafford completed 55 of 61 (90.2%) of passes he threw to Kupp in the fourth quarter of regular season or playoff games for 802 yards, seven TDs, no interceptions and a 157.0 rating.

The 55 fourth-quarter catches are the most in a season since at least 1991, with the previous high for a QB-receiver combo being the 43 that Victor Cruz caught from Eli Manning in 2011.

Stafford had a 143.8 rating when throwing to Kupp this postseason, the best for any QB targeting a single receiver in the past five seasons.

The game-winning drive capped memorable seasons for both Kupp and Stafford.

Kupp became the fourth player since the merger to win the receiving triple crown in the regular season, leading the league in receptions, yards receiving and TD catches. He also joined Jerry Rice as the only receivers to win the Offensive Player of the Year and Super Bowl MVP in their careers, but only Kupp did it in the same season.

Kupp set records with 178 catches and 2,425 yards receiving in the regular season and playoffs combined with his 22 TD catches ranking tied for second behind Randy Moss' 24 in the 2007 season.

Kupp also set the playoff record with 33 catches, and his 478 yards ranked second to Larry Fitzgerald's 546 in the 2008 season.

The game-winning TD pass was the 50th thrown by Stafford in the regular season and playoffs, becoming the ninth player to reach that mark. The only other QB to win it all in a 50-TD pass season was Tom Brady in 2020 for Tampa Bay.

Stafford also topped the 6,000-yard passing mark this season, becoming the sixth player to do that. He joined Eli Manning (2011) as the only ones to win the Super Bowl that season.

Close Super Bowl losses are nothing new to the Bengals, who lost their previous two appearances 26-21 and 20-16 to the San Francisco 49ers in the 1980s.

The last two of those defeats came on come-from-behind drives capped by TD passes from Joe Montana (in January 1989) and Stafford in the final 90 seconds. Those are two of the six Super Bowls lost by a team winning with 2:00 left in the game.

There have been 15 Super Bowls decided by five points or fewer, with only the Bengals and Cowboys doing it three times.

The Rams are on the other end of the close-game spectrum, becoming the first team to win three playoff games by three points or fewer in the same postseason after narrow wins the previous two rounds against San Francisco and Tampa Bay.

The Rams were the rare Super Bowl champion to win it with almost no contribution from the running game.

Los Angeles ran 23 times for 43 yards with the 1.87 average per carry ranking fourth-worst in Super Bowl history behind three teams that were double-digit losers in their games: the Vikings in 1974 season (0.81 yards per carry), the Patriots in the 1985 season (0.64 yards per carry) and the Raiders in the 2002 season (1.73 yards per carry.

The previous low for the winning team came back in the 1970 season, when the Colts averaged 2.23 yards per carry in a 16-13 win over Dallas.

Cam Akers struggled, with 13 carries for 21 yards. Akers, who made a remarkable return from a torn Achilles tendon, finished the postseason with 67 carries for 172 yards. His 2.57 yards per carry ranked second-worst ever among backs with at least 50 carries in a postseason, with only Brian Westbrook's 2.38 yards per carry for Philadelphia in the 2008 season worse.

Few quarterbacks have ever had quite a season like Cincinnati's Joe Burrow when it comes to getting sacked.

Burrow joined Roger Staubach (in 1975 season against the Steelers) as the only QBs ever sacked seven times in a Super Bowl.

That added to Burrow's staggering sack total, as he was brought down 70 times in the regular season and playoffs, the third-most all-time to David Carr's 76 for the expansion Texans in 2002 and Randall Cunningham with 72 for the Eagles in 1986.

Earlier in the playoffs, Burrow became the second QB to win a playoff game when getting sacked nine times in a divisional round win at Tennessee. Burrow's 19 sacks this postseason broke the previous record of 14 in the 1987 season.

Donald had two sacks and joined Hall of Famers Joe Greene, Lawrence Taylor, Mike Singletary, Reggie White and Ray Lewis as the only players to win multiple AP Defensive Player of the Year awards along with a Super Bowl.

Miller also had two sacks to go with the 2 1/2 he had when he won the Super Bowl MVP with Denver six years ago, tying Charles Haley for the most career sacks in the Super Bowl.