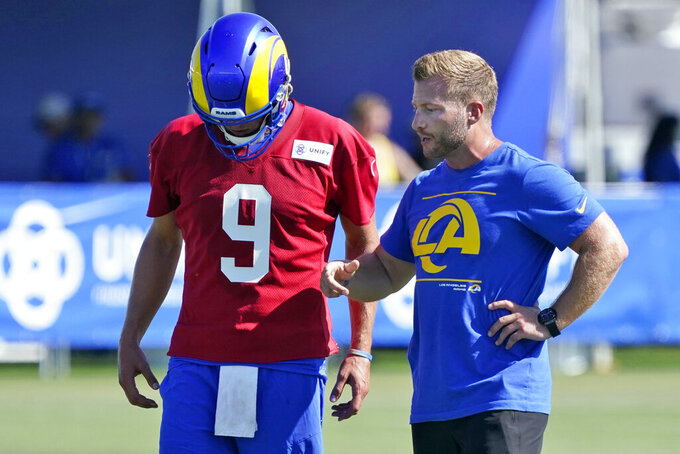 THOUSAND OAKS, Calif. (AP) — There were dark clouds over the Los Angeles Rams during their first joint practice with the Las Vegas Raiders on Wednesday, and it had nothing to do with an unusual August rainstorm that alternated from drizzling to downpour and back again during the two-hour session.

Matthew Stafford threw three interceptions, the offensive line was often overwhelmed and the run game mostly ineffective, the second time in less than two weeks the Rams starters have not been able to get on track in a workout with another team.

Despite seeing similar issues from their recent practice with the Dallas Cowboys, coach Sean McVay isn’t concerned by those struggles yet.

“You learn from it,” McVay said. “We don’t do any sort of game planning for these practices. This is a great opportunity to test a lot of our rules, and that’s what I like about Matthew is he’s aggressively trying things out so then you can learn how to be smart with that decision-making thought process when the games really count. There’s a lot of good things. It’s a totally different structure defensively than what we’re accustomed to seeing.”

The team period pitting the starting offenses and defenses against one another got off to a bad start when Stafford’s first pass was too high for wide receiver Robert Woods, hitting him in the hand before Raiders rookie safety Tre’von Moehrig intercepted the deflected ball.

Cornerback Rasul Douglas and linebacker Cory Littleton, a former Ram, had the other two picks.

“They did a nice job getting the ball back from us a couple times,” Stafford said. “I made a couple poor decisions that I wish I had back, that’s practice. Some of the new stuff we’re putting in, I want to make sure I get reps at it. I got to do a better job of making sure we end up with the ball after every play.”

The common trait on all three of Stafford’s turnovers was an inability to set his feet and throw with power because of pressure in the pocket. While the offensive line eventually found ways to give Stafford enough time to attempt and complete deep balls working with the Cowboys on Aug. 7 in Oxnard, California, there was no such improvement against the Raiders.

Stafford’s best completion of the day came on a short crossing route over the middle by Cooper Kupp that allowed the wide receiver to run after making the catch.

Stafford was sacked on his second drop back, and several other plays could have been whistled dead. There were also procedure penalties, and one of the few productive runs by Darrell Henderson Jr. was flagged for holding.

But Stafford said there is value in the adversity that comes from operating in unfamiliar situations before the games count.

“It’s always good to get out there and play somebody different,” Stafford said. “Different schemes, different looks, you know, different players, just getting used to all that stuff. We saw some stuff from them that we haven’t seen any of in camp, which is really good for us as a team and me as a quarterback to see our plays kind of develop against certain coverages and certain players."

“These practices are good indicators of where you’re at,” McVay said. “It’s not the end all, be all because of how we approach it, but we’ve got a long way to go and we still have a good amount of time, but we can’t afford to waste a single day.”

That last point was McVay’s biggest concern after a fight between Rams defensive tackle Sebastian Joseph-Day and Raiders offensive lineman Richie Incognito and a hard hit by Raiders safety Johnathan Abram on Woods during a two-minute drill created a sour mood.

Set to practice together again Thursday before playing in the second preseason game for each team on Saturday, McVay said it was important for all parties to operate in a respectful manner.

“All of us had the same intentions and, again, I don’t believe there was any sort of malicious intent from their guys, but just that practice etiquette and getting the work that we want. This is two teams trying to get ready for the upcoming season, trying to shape one another, and we want to make sure that we structure the practice in a way that’s beneficiary for both of us,” McVay said.

NOTES: OLB Leonard Floyd did not practice after hurting his ankle Monday. The injury is not serious, McVay said.