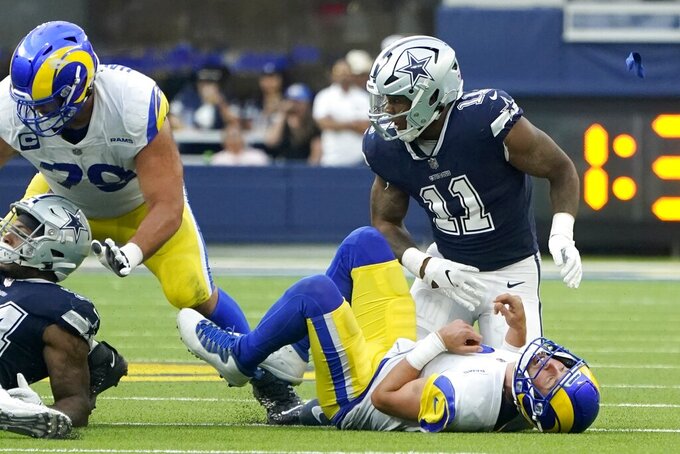 It's the rest of the unit he's worried about.

“I love Matthew Stafford. He is competing and doing everything in his power for this team. He needs some help. And we got to be able to help him,” McVay said after the Rams' 22-10 loss to the Dallas Cowboys, which dropped the Super Bowl champions to 2-3.

It's only the third time since 2000 a defending champion has posted a losing record through five games.

Stafford completed 28 of 42 passes for 308 yards, but with the Rams having their fifth different offensive line combination in as many games, he was pressured on 23 of 47 dropbacks. That's the second-most pressures the Rams have allowed since McVay became coach in 2017, and the 48.9% pressure rate is the highest.

Stafford was pressured from the first snap. On the third play, he was sacked by Dorance Armstrong, leading to a fumble that DeMarcus Lawrence returned 19 yards for a touchdown and 6-0 Dallas lead. Stafford was pressured 28 times the Rams' first three games but 43 times in losses to San Francisco and Dallas.

“We’ve got to be able to figure it out, whether it’s guys that are playing right now, or whether we need to figure out some other options,” McVay said. “But it’s not good enough, and it’s not exclusive to one player or position. There are some things that consistently are glaring issues for us that are preventing us a chance to be able to operate at a level that you guys have seen from us.”

When asked if the constant turnover on the line is affecting him, Stafford said the bigger impact is on the line itself because different combinations of players can struggle with combination blocks and nonverbal communication.

Stafford did connect on a 75-yard touchdown pass to Cooper Kupp to put the Rams up 10-9 with 9:31 remaining in the second quarter, but that was the last time they scored even though they drove into Dallas territory on four of their final seven drives.

Aside from the pass protection, the Rams need more consistent production in the run game. Cam Akers had 41 yards on eight carries in the first quarter and went backward from there, with minus-8 yards on five carries.

“I don’t think they made any adjustments. I think we made a few adjustments. There was nothing they did to stop us,” Akers said.

After two straight weeks of facing difficult defenses, the Rams host Carolina (1-4) next Sunday before their bye week.

Stafford did not want to compare his team's struggles to last November, when the Rams lost three straight games. It's obvious things need to turn around quickly as Los Angeles is under .500 for only the second time in McVay's tenure.

“I don’t like to compare. I don’t want to sit there and think about things that have happened last year, 10 years ago, whatever it is,” Stafford said. “Just do everything I can to be here and now.”