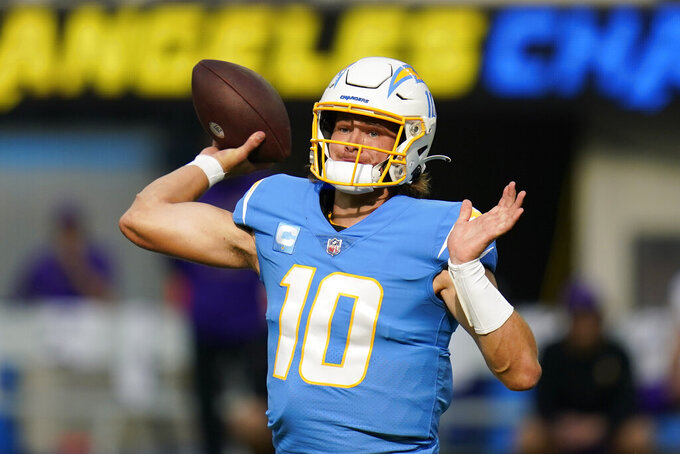 Los Angeles Chargers quarterback Justin Herbert (10) throws a pass during the first half of an NFL football game against the Minnesota Vikings, Sunday, Nov. 14, 2021, in Inglewood, Calif. (AP Photo/Gregory Bull)

Justin Herbert and the Los Angeles Chargers' offense was operating at a high level the first five weeks of the season as they got off to a 4-1 start.

Opposing defenses have caught up to the scheme of first-year coordinator Joe Lombardi, though.

Sunday's 27-20 loss to Minnesota was Los Angeles' third in the last four games and dropped it out of the AFC West lead.

Coach Brandon Staley, also in his first season, said a combination of protection schemes and defenses taking away the deep part of the field have been at the forefront of the Chargers' recent struggles.

“There are a lot of plays that are being called to access the deep part of the field. But when you play against a quarterback that’s as gifted as he is, and against skill position groupings like ours, you’re going to try and force him to drive the field,” Staley said.

Herbert was 17 of 35 on passes with yardage of 16 or more the first five games, but he is 10 of 20 the past four. Staley isn't concerned with Herbert's air yards as much as he is the offense's drop-off in big plays. The Chargers had 43 explosive plays (runs of 12 yards or more, pass plays longer than 16 yards) early in the season, and that has decreased to 24 the past four games.

Besides taking away the deep part of the field, defenses have limited yards after the catch.

“We really have to be strategic in terms of creating the explosive plays,” Staley said. “We need to create more explosions from the run-and-catch game or from misdirection. And then find ways in the drop-back game to access the intermediate part of the field. We need to be patient that way and always look for creative ways to get those big plays."

Keenan Allen had eight catches against the Vikings, marking the 12th time in his career he has had at least eight receptions in back-to-back games. Allen, second in the AFC in catches with 65, needs 11 receptions over the next two games to match Antonio Brown for fastest player to 700 receptions (111 games).

Ty Long is fourth in the AFC in gross punting average, but the Chargers are next to last in the league allowing 13.4 yards per punt return. Los Angeles has six rookies on its punt coverage team, which is creating matchup problems. Minnesota's Dede Westbrook had a 45-yard return down to the LA 28-yard line.

Dustin Hopkins has made all five of his field-goal attempts and has a touchback on nine of 16 kickoffs in his three games since being signed by the Chargers. Hopkins had two field goals against the Vikings, including a 46-yarder. He has made both of his attempts from 40 yards or more; previous kicker Tristan Vizcaino was 1 of 2. Vizcaino made the roster at the start of the season due to a strong leg, but only had a touchback on 13 of 31 kickoffs.

Cornerback Tevaughn Campbell played a career-high 75 snaps on defense because of injuries in the secondary, but struggled in his matchup against Justin Jefferson and Adam Thielen. Campbell was targeted eight times and allowed seven receptions against Jefferson and Thielen, including two on third-and-long plays on the final drive during the fourth quarter that allowed the Vikings to run out the clock.

Cornerback Michael Davis (hamstring) is expected to return to practice this week after missing the past two games. Linebacker Drue Tranquill remains in COVID-19 protocols.

The Chargers host Pittsburgh in a crucial Sunday night game when it comes to both team's postseason hopes. The Steelers are in possession of the first AFC wild card after their tie against the Lions left them at 5-3-1. The Chargers are one of the three AFC teams at 5-4, but currently hold the final playoff spot on tiebreakers.