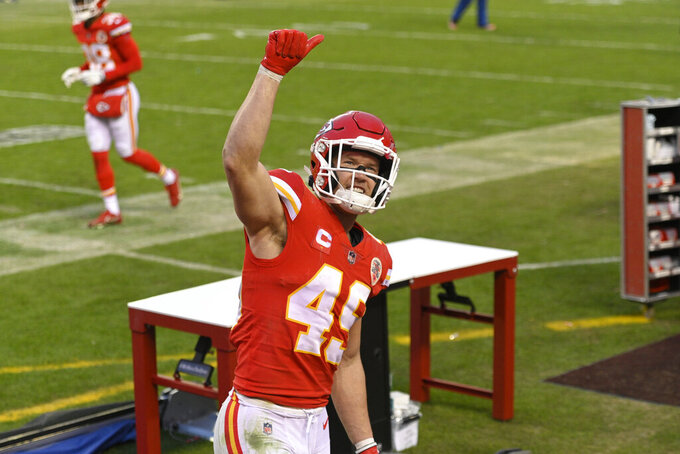 KANSAS CITY, Mo. (AP) — It was an easy decision for Daniel Sorensen to sign with the Kansas City Chiefs as an undrafted free agent.

They were really the only ones who wanted him.

Sorensen had just finished a standout career at BYU, but his game film and measurables went largely overlooked by the rest of the NFL. He wasn't too surprised when the 2014 draft came and went without his name getting called, but he was a little caught off guard when the phone rang following the seventh round and he heard the voice on the other end.

“Andy Reid was the only head coach that reached out to me,” Sorensen recalled, "and that was pretty big. That was pretty remarkable to get a phone call from him. And he shot me straight: ‘You have a good opportunity to make this team here.’"

Sorensen not only wound up making the team, he's stuck around for seven seasons, helping the Chiefs put together the best stretch in franchise history: They have won the past five AFC West titles, reached the conference championship game three consecutive years, and on Sunday will play the Tampa Bay Buccaneers for their second straight Super Bowl title.

Sorensen isn't an outlier, either.

While the Chiefs roster is undoubtedly top heavy — Patrick Mahomes is due a half-billion dollars over the next 10 years, and stars such as Tyreek Hill and Travis Kelce are rich beyond their wildest imaginations — they wouldn't be in this position if not for a collection of late-round draft picks and college free agents that are the envy of the league.

No fewer than 22 players drafted in the third round or later — or not all — are on the Chiefs roster as they finish their prep work for the Super Bowl. Ten of them are likely to start on offense, defense or special teams against the Buccaneers.

That doesn't include a handful of players with a similar backstory that reside on their practice squad.

“I think it goes along with the way this organization is run,” Sorensen explained. "They pride themselves and we pride ourselves on our ability to trust the process, and the process has proven to be successful.

“They get guys that are willing to buy in, willing to practice, willing to put in the effort of watching the film and doing the little things right, and you've seen the careers of a lot of guys that have blossomed in this system.”

At first glance, it shouldn't make sense. The Chiefs have won consistently for the better part of a decade, with a roster dotted by more stars than there are in the nighttime sky. There shouldn't be room for seemingly inferior talent.

Nor should players overlooked by every other NFL team in the draft, including those that have won far fewer games, jump at the opportunity to sign with Kansas City when it would appear to be a longshot to survive the cut.

Yet those are some of the reasons why guys such as linebacker Ben Niemann and defensive tackle Tershawn Wharton not only signed with the Chiefs but carved out important roles.

They are surrounded by some of the NFL's best players every time they step into the locker room, and that often forces them to raise their play to a level not even they thought possible.

They are welcomed by a group of players so confident and secure in their own ability that they are willing to pour into them whatever knowledge they can. And with Reid in control, they have a coach that has proven over several decades that he can get the best out of his players.

The result: Fourth-round draft pick L'Jarius Sneed was among the highest-rated cornerbacks in the league this season, and 2019 sixth-rounder Rashad Fenton has become indispensable alongside him and Sorensen in the defensive backfield.

When injuries popped up on the offensive line, the Chiefs plugged a big hole with Nick Allegretti, a seventh-round pick in 2019. They also added depth with Yasir Durant, an undrafted rookie capable of playing several positions.

Reid deserves much of the credit, but so does general manager Brett Veach, who has an uncanny ability to unearth talent everywhere from junior colleges and Division II schools to the mighty Southeastern Conference.

He needs to keep doing it, too. Like any other NFL team, the Chiefs can only afford to carry the gargantuan contracts of Mahomes and their other pricey stars if they're able to stock the rest of the roster with inexpensive talent.

“Brett does a nice job of knowing what the coaches need to be successful on both sides of the ball," Reid said. "He listens and weighs out what his scouts believe, what he believes, what the coaches believe, then he comes to a conclusions. He's been strong on his conviction with certain players that he thought would boost us and gone for it. And it's worked out.”