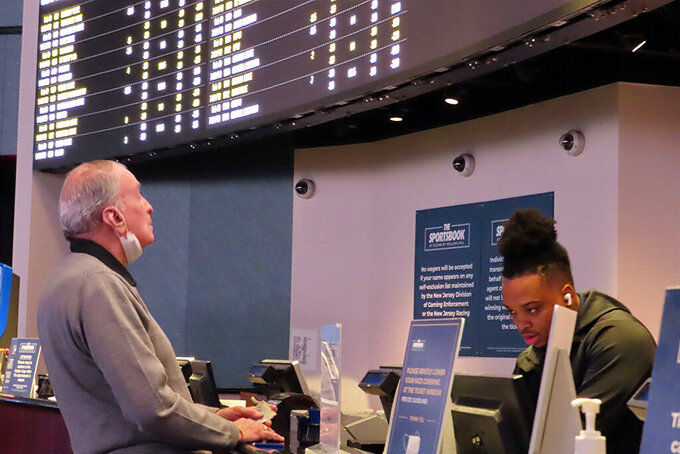 A man places a bet at the sportsbook at the Ocean Casino Resort, on Thursday, Feb. 10, 2022, in Atlantic City, N.J. The American Gaming Association estimates more than 31 million Americans will bet on this year's Super Bowl NFL football game. (AP Photo/Wayne Parry)

ATLANTIC CITY, N.J. (AP) — Legal betting on this year's Super Bowl was heavy in the five states that had reported results as of Tuesday.

With more states approving legal sports betting, this year's Super Bowl was sure to break records; the American Gaming Association predicted last week that $7.6 billion would be wagered on the NFL championship game between the Los Angeles Rams and the Cincinnati Bengals, although that total also included bets made with illegal bookmakers.

“It’s pointing to a very positive picture,” said David Forman, senior director of research at the gaming association. “Nevada was up over 30% from last year, New Jersey was up over 20%, which is particularly impressive given that New York is now online.”

New York has soared to the No. 1 spot in the nation in terms of the amount bet on sports, taking in nearly $2 billion worth of bets in its first month. It will report the amount of Super Bowl bets its sportsbooks took on the Super Bowl on Friday.

The Rams beat the Bengals 23-20 but did not cover the 4.5-point spread, meaning that those who backed the underdog Bengals and took the points were winners.

Nevada's total smashed its own record by more than $21 million. Its sportsbooks kept $15.4 million of that total as revenue, an increase of 22.6% over last year.

New Jersey's sportsbooks kept $7.8 million after winning bets and other expenses were paid out, down from the $11.3 million they kept from last year's Super Bowl.

Illinois took $15 million more in Super Bowl bets than it did for last year's Super Bowl. Its casinos and sportsbooks kept $9.5 million as revenue, up from $7.6 million a year earlier.

Mississippi has taken sports bets since 2018, but only at in-person sites; it does not offer mobile betting, which accounts for over 80% of the U.S. sports betting market.

GeoComply Solutions, whose location technology is used by virtually the entire legal sports betting industry in America to verify that customers are where they say they are before making a bet, reported processing more than 80 million geolocation transactions this past weekend, more than twice the amount recorded for the 2021 Super Bowl.