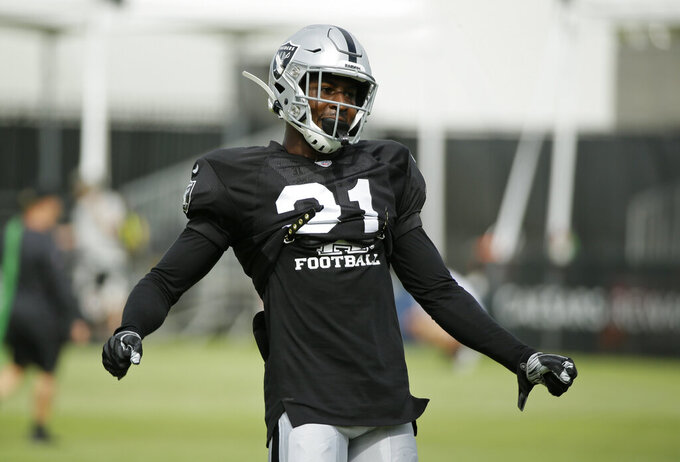 NAPA, Calif. (AP) — Gareon Conley hasn't been shy about asking for help as he attempts to cement his spot as the Oakland Raiders' top cornerback.

In the early days of training camp. Conley was one of a handful of players who gathered to watch film after practice with linebacker Vontaze Burfict, a veteran of defensive coordinator Paul Guenther's system. On Tuesday, Conley spent part of the morning going one on one with Antonio Brown as the seven-time Pro Bowl wide receiver continues to slowly work his way back from a foot injury.

In many ways Conley is trying to make up for lost time.

The 24th overall pick in 2017 missed all of training camp and the season opener that year with what former Raiders general manager Reggie McKenzie described as shin splints. Conley, who on Tuesday clarified the injury was a broken tibia, was limited to two games as a rookie.

In 2018, Conley missed more than two weeks of camp with a hip strain he suffered on the first day of practice. He played well when healthy, starting 14 games with three interceptions and one touchdown.

"We're just trying to get him to be all he can be for 16 weeks," Raiders coach Jon Gruden said. "We want him to be healthy. If he's out there every day he's got a chance to be an excellent football player. That's the big thing right now."

Conley had his hands full with Brown. When the two locked up in positional drills, Brown beat Conley with a quick inside move. Later during a passing drill, Brown used a double move to pull away from Conley late in the route then turned his back to the end zone and hauled in a long touchdown pass from Derek Carr.

"We're going to try to isolate matchups every day," Gruden said. "Sometimes you'll come out here and see Conley with Antonio, Conley with Tyrell (Williams), Conley with (Hunter) Refrow. We're trying to see certain matchups and the competition has really helped everybody get better."

Staying out of the trainers' room is key to Conley's progress.

"This is probably the first time I made it through a whole week of training camp since I've been in the league," he said. "I'm always growing as a player and I feel comfortable with the system. I feel like I made strides but I feel like I can always make better strides. There's always money left out there on the field. I just have to get better every time I can."

Brown wasn't on the field much longer after beating Conley for the long touchdown. The Raiders held him out of the team scrimmage portion of practice and continue to ease him back after Brown opened camp on the non-football injury list.

He was shadowed by a personal trainer all morning. At one point, the two appeared headed for the locker room to call it a day before veering over to talk to Raiders owner Mark Davis. Shortly after that Brown briefly returned and caught a handful of passes, including the touchdown over Conley, then spent the rest of the afternoon in tennis shoes and a black Raiders hoodie.

"He's getting close and hopefully after the day off tomorrow he'll get closer," said Gruden, who declined to specify the exact nature of Brown's injury. "But we need him on the grass. We need him to get going. He's chomping at the bit. He's not a real patient guy. He's day to day. It's nothing serious but it's something that's going to take a couple days."

Notes: Defensive tackle Gabe Wright had to be helped off the field and was taken to the locker room with an apparent right leg injury. . The Raiders signed defensive tackle Ethan Westbrooks, who has nine career sacks in 67 games. Tight end Erik Swoope and defensive tackle Ronald Ollie were waived.