Steelers are last team to beat Patriots in game that counted 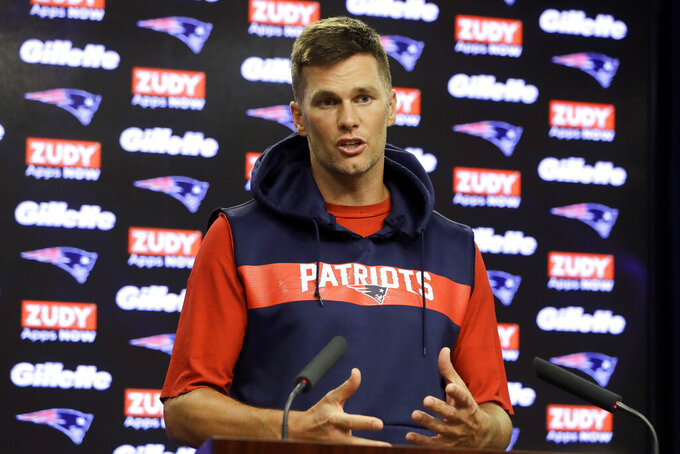 FOXBOROUGH, Mass. (AP) — When the New England Patriots unveil their sixth championship banner on Sunday night, the Pittsburgh Steelers will have a close-up view.

The last team to beat New England — in Week 15 last year — the Steelers missed the playoffs while the Patriots went back to the NFL title game for the second year in a row. Now, the only other franchise to win six Super Bowls will be in town for the defending champions' season opener, as both teams begin their quest for a seventh.

"They are the world champs and we have to go to their place and do our best," Pittsburgh quarterback Ben Roethlisberger said this week as he prepared to start his 16th NFL season. "I think it is cool to be a part of, honestly. You go out there and you watch it and you channel it to say, 'OK, that needs to be us next year.'"

Himself a two-time champion, Roethlisberger has watched some of his best chances to add another ring blocked by Tom Brady and Bill Belichick in New England. The Patriots have knocked Pittsburgh out of the playoffs twice in the Big Ben era (and another on their way to their first title in 2001).

This season they will meet in Week 1. And maybe again in January.

"Those are lofty goals, and expectations are high for us and they're high for them," Brady said. "The NFL is tough. Every team starts at the bottom every year, and you can't pick up where you left off last year. You have to earn it every day, and the competition has already started."

Here are some other things to look for from Sunday night's game:

Brady, 42, and Roethlisberger, 37, keep on going. But they've lost two of their best targets.

New England tight end Rob Gronkowski has retired, and Steelers receiver Antonio Brown wore out his welcome in Pittsburgh and was traded to Oakland for a relatively paltry third- and fifth- round draft picks.

"Dynamic playmakers are going to come and go and others are going to rise and assume the roles," Steelers coach Mike Tomlin said, adding that it was the same when the team lost Hines Ward, Mike Wallace and Santonio Holmes. "I'm sure, organizationally, New England feels the same way."

Brown caught 686 passes for 9,145 yards from 2013-18 — the most for a receiver in a six-year span — but Tomlin benched him for the finale last year and shipped him to Oakland in the offseason. The change in scenery doesn't appear to have changed him: He showed up with frostbitten feet, and he has been fined $54,000 by the Raiders.

The Steelers held on to kicker Chris Boswell despite a rocky 2018 in which the former Pro Bowler made just 13 of 20 field goals before ending the season on injured reserve. The team brought in rookie Matthew Wright to challenge Boswell during training camp, and Boswell responded by putting together a nearly flawless six weeks to keep a firm grasp on the job and lock up a $2 million roster bonus. Not that Boswell's mind is on his money. "If I'm thinking about money every time I am kicking," Boswell said, "something is going to go wrong."

Kameron Kelly found himself on the unemployment line last spring when the Alliance of American Football abruptly went out of business in the middle of the season. Now the safety could be standing across the line of scrimmage from Brady and the defending Super Bowl champions with starter Sean Davis iffy with an ankle injury. Kelly will be part of a new-look secondary that includes cornerback Steven Nelson, whom the Steelers signed to a three-year contract in free agency. Pittsburgh is looking to create more takeaways after managing just 15 in 2018. That could be hard against Brady, who has never thrown a pick at home against the Steelers.

Despite a stellar preseason in which he finished with 18 tackles in three games, don't expect Steelers rookie linebacker Devin Bush to run out on the field with the starters. Veteran Mark Barron is likely to start alongside Vince Williams, with Bush being given limited looks as the 10th overall pick in the draft adjusts to the NFL's speed. "In the long-term (how much he plays) will be how he performs based on the amount of work we give him," Tomlin said.

Brady will begin another quest to make NFL history. If Brady starts all 16 games for the Patriots this year, he would be the first NFL quarterback to do so at 42 years of age.

"I love being available to the team," he said. "That's been something I feel like is a very important part of my job. I can't help the team if I'm not out there, and I work pretty hard to make sure I am."

AP Sports Writer Will Graves contributed to this report.