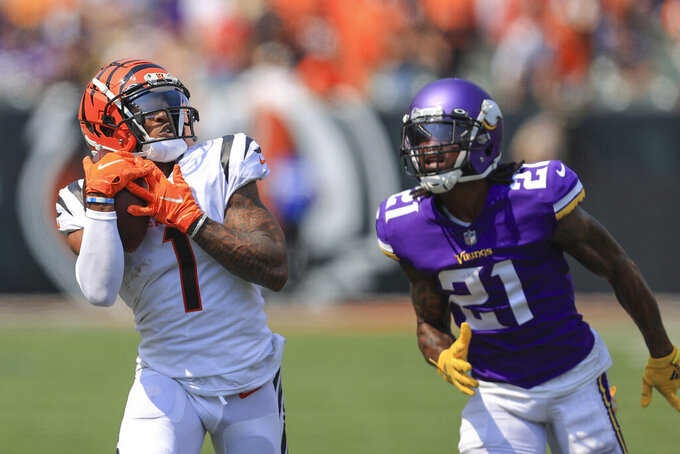 Cincinnati Bengals wide receiver Ja'Marr Chase (1) makes a catch past Minnesota Vikings defensive back Bashaud Breeland (21) and takes it in for a touchdown in the first half of an NFL football game, Sunday, Sept. 12, 2021, in Cincinnati. (AP Photo/Aaron Doster)

PITTSBURGH (AP) — No matter when it comes, that first loss always stings.

All the work during the offseason. All the optimism built over the course of training camp. All the preparation during game week. All of it evaporates the second the clock hits zero and the number next to your team's name is less than the number next to the one for the other guys.

“It's like a slap in the face,” Pittsburgh Steelers linebacker Joe Schobert said.

The key, as Schobert has learned through his five-plus years in the NFL, is to not let one slap turn into another. The Steelers (1-1) and Cincinnati (1-1) will try to avoid it on Sunday when the Bengals visit Pittsburgh.

Both clubs started the year with rousing wins in their respective openers. Both followed by letting close games slip away in the fourth quarter last week.

While Pittsburgh has dominated the series with its longtime AFC North rivals — having won 14 of the past 16 meetings — the Bengals no longer appear to be pushovers in head coach Zac Taylor's third season. And the swagger the defending division champion Steelers carried during their 11-0 start to 2020 seems long ago.

Maybe because it is.

Pittsburgh is just 2-6 in its past eight games overall, including a listless loss in Cincinnati last December that hinted at the first-round playoff flameout to Cleveland to come.

If the Bengals want to take a step forward to announce themselves as more than an afterthought in one of the NFL's toughest divisions, winning at Heinz Field for the first time in six years would help.

“If we want to get to where we want to be, we've got to take this step,” said Cincinnati cornerback Mike Hilton, who played four seasons in Pittsburgh before signing with the Bengals last spring.

As dismal as Pittsburgh’s offense, particularly the running game, looked while falling to Las Vegas last week, quarterback Ben Roethlisberger — who is expected to play despite a chest injury — stressed there's no need to panic.

Maybe, but if the “slap” the Steelers experienced against the Raiders leads to another against the Bengals, it might be time to start.

Pittsburgh is banged up on defense — defensive linemen Stephon Tuitt and Tyson Alualu are out and outside linebackers T.J. Watt and Alex Highsmith are among a group dealing with groin injuries — but the mandate remains the same: make second-year Bengals quarterback Joe Burrow as uncomfortable as possible.

Taylor called the offensive line's difficulty in protecting the 2020 No. 1 pick “frustrating” because the breakdowns are coming from all over instead of just one place.

The Steelers sacked Burrow four times during a 36-10 blowout last November and Cincinnati's offensive line has already allowed nine sacks through two games in 2021. Burrow understands it comes with the territory, particularly early in the season.

"It’s part of the game, it’s part of being a quarterback," he said. "I’m going to keep hanging in there and taking those hits and trying to complete that ball. It is what it is.”

After rushing for 127 yards and a touchdown in a Week 1 win over the Vikings, Joe Mixon and the Bengals running game stalled against a better defensive front in Chicago. Mixon carried the ball 20 times for 69 yards, an average of just 3.5 yards per carry.

Taylor said some of those Mixon runs were close to breaking for more yards if not for small mistakes in the way the plays developed.

“We felt like there was a little bit more meat on the bone than we ended up getting, and those are things we have to improve on,” he said. “It’s early in the season. We know we’re going to get in a rhythm and have a great running game. There was just a couple of missed opportunities in that regard.”

The Steelers would love to have Cincinnati’s running game problems. Pittsburgh is last in yards rushing per game and 30th in yards per rushing attempt through two weeks despite a massive offseason overhaul that included taking running back Najee Harris in the first round, center Kendrick Green in the third and left tackle, Dan Moore Jr., in the fourth.

“We’ve just got to keep working,” Pittsburgh coach Mike Tomlin said. “Development is that. It’s development. It doesn’t happen in an instant, it doesn’t happen overnight. We’re sensitive to that. But at the same time, there’s urgency because we’ve got ballgames to win in the midst of all of this.”

Hilton arrived in Pittsburgh in December 2016 as a practice squad player. He left after signing a four-year, $24-million contract with Cincinnati last spring, a deal he landed after becoming one of the most disruptive slot cornerbacks in the NFL.

“It looks almost like he’s taken some of the Steeler defense over there and doing some stuff,” Roethlisberger said. “He’s blitzing, he’s taking away the screens, he’s doing what we came to love and expect here.”

The 5-foot-9, 184-pound Hilton, who has nine tackles through two games, is hoping to have a shot at taking down the 6-5, 240-pound Roethlisberger after being forced to hold up in practice during Hilton's time in Pittsburgh.

“I've definitely had that run through my mind,” Hilton said. “And hopefully I get this opportunity on Sunday and hopefully it will be a big play.”