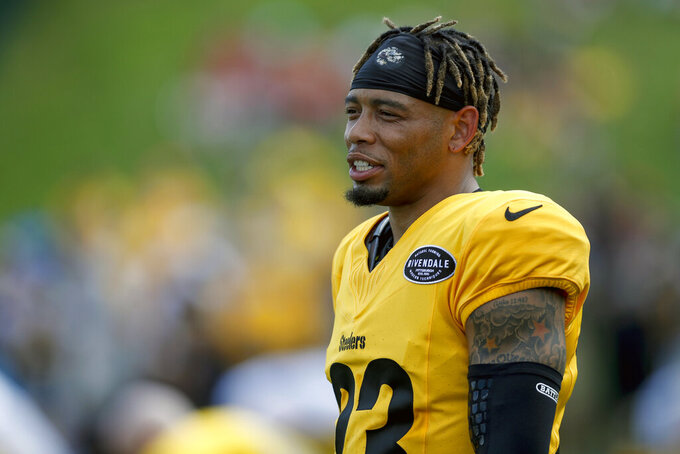 FILE - In this July 28, 2019, file photo, Pittsburgh Steelers cornerback Joe Haden (23) is shown during an NFL football training camp practice in Latrobe, Pa. Haden called it two years ago when the veteran cornerback practically sprinted to Pittsburgh shortly after the Cleveland Browns released him on the eve of the 2017 regular season. “When I came here I didn't think I was going to leave,” Haden said. And he’s not. At least not for a while after signing a new three-year, $32 million contract that runs through the 2021 season, a testament to the club’s faith the 30-year-old two-time Pro Bowler isn’t slowing down as he prepares for his 10th season. (AP Photo/Keith Srakocic, File)

PITTSBURGH (AP) — Joe Haden called it two years ago when the veteran cornerback practically sprinted to Pittsburgh shortly after the Cleveland Browns released him on the eve of the 2017 regular season.

"When I came here I didn't think I was going to leave," Haden said.

And he's not. At least not for a while after signing a three-year, $32 million contract that runs through the 2021 season, a testament to the club's faith the 30-year-old two-time Pro Bowler isn't slowing down as he prepares for his 10th season. If he plays through the end of the deal — which Haden insists won't be his last — he'll be one of the most highly paid defensive backs in NFL history.

Not that Haden is thinking about the big picture. He's well aware of the responsibility that comes with all those zeroes on his contract. It's a responsibility he embraces.

"I'm just trying to continue to let everyone know I'm worth the money, that I'm worth the contracts that I'm getting," Haden said. "So right now, it's an honor, a pleasure to be up there with Champ (Bailey) and (Darrelle) Revis and guys like that. But for me still, I'm loving the game. Still trying to be the best I can be. Still trying to make Pro Bowls and All-Pros. I'm still excited. I'm still playing at a high level and the Steelers appreciate it."

The seventh overall pick in the 2010 draft, Haden arrived in Pittsburgh trying to resurrect his career after seven productive but occasionally injury-plagued seasons with the Browns. He's still never played a full 16-game schedule, but he's appeared in 26 of a possible 32 games with the Steelers. He finished with two interceptions and 12 passes defensed — both team highs — and has taken on the role of elder statesman for a young secondary that currently doesn't have any player with more than four years of experience.

"He knows how to go about doing business," nickelback Mike Hilton said. "When you've got a guy like that in your room, you really look up to him and you know he's going to lead the pack."

Something Haden does in multiple ways. He's not shy about sharing his opinions during film sessions but has also focused on his commitment to his body. He hired his own physical therapist while still with the Browns to help his legs deal with the mileage that comes from playing one of football's most demanding positions.

"If you can't run, that's going to be the first thing out the door," Haden said. "So when I got him, it just was able help my speed with my hamstring, with my groin. I would say that four years ago was when I really, really started taking care of my body and being able to come into the season better than when I left."

A better understanding of when to push it and when to hold back helps. Haden spent most of training camp dealing with a minor ankle injury. Asked if there was a time earlier in his career when he would have tried to play through it to show the coaching staff he was ready for the regular season, Haden nodded and said "probably."

"I think that's another thing I think with the (training) staff," Haden said. "Them just knowing, like, 'All right Joe, if it's going to take you another week during preseason it's not really worth trying to get you out there.' It's a little bit of both of us working together. I think they just know what they can get out of me and then they know I'm a professional and I'm ready to go."

Pittsburgh will need Haden to be ready to go with a visit to New England looming in the opener. Haden played his best game of 2018 in a victory over the Patriots last December, picking off Tom Brady and racking up a dozen tackles. He's fine with beginning the year on the road against the defending Super Bowl champions in what he sees as a litmus test for both his team and his own unique set of skills, skills that remain sharp as he eyes a second decade in the NFL.

"I think just above the neck I'm mentally ready," Haden said. "Physically I have the right tools and the right people in place to keep playing at this high level."