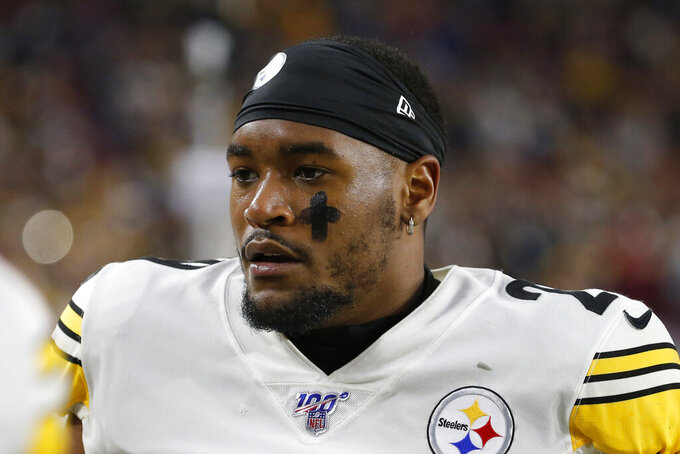 FILE - In this Sunday, Dec. 8, 2019, file photo, Pittsburgh Steelers' Kameron Kelly (29) watches during an NFL football game against the Arizona Cardinals in Glendale, Ariz. Kelly is facing multiple charges following an alleged altercation with police at a bar, early Friday, Dec. 20, 2019. The 23-year-old has been charged with two counts of making terroristic threats and one count of resisting arrest. (AP Photo/Rick Scuteri, File)

PITTSBURGH (AP) — The Pittsburgh Steelers cut reserve safety Kameron Kelly on Friday hours after the rookie was arrested following an alleged altercation with police at a bar.

The 23-year-old Kelly was charged with two counts of making terroristic threats and one count of resisting arrest after authorities said he became combative after refusing to leave Mario's South Side Saloon early Friday. He was arraigned at about 4:30 a.m. and released on nonmonetary bail.

According to the criminal complaint, police were called to the bar after an employee reported Kelly for becoming disorderly. Police say the employee told them Kelly had threatened to punch him for skipping Kelly's selection on the jukebox.

Police say an officer accidentally stepped on the foot of a woman outside the bar while confronting Kelly. Kelly told police the woman was with him and became aggressive with officers, according to the complaint. Police say Kelly resisted arrest and was punched multiple times by an officer, who said in the complaint that he struck Kelly in an effort to defuse the situation. Kelly was treated at a hospital for a busted lip.

It was not immediately clear if he had an attorney who could comment on his behalf.

Kelly had one interception in 14 games with the Steelers after making the team out of training camp as a free agent. The Steelers did not comment on Kelly's arrest beyond announcing that they had waived him.

Pittsburgh promoted safety Marcus Allen from the practice squad to take Kelly's spot on the 53-man roster. The Steelers play the New York Jets on Sunday.