Steelers' Edmunds to step up while Fitzpatrick sidelined 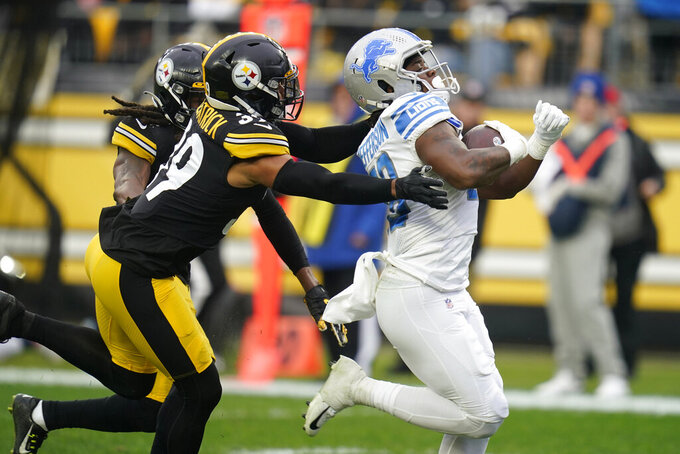 PITTSBURGH (AP) — Pittsburgh Steelers defensive back Terrell Edmunds made sure to call fellow safety Minkah Fitzpatrick on his 25th birthday.

Edmunds wasn’t just calling on Wednesday to wish Fitzpatrick a happy birthday. Edmunds also called to check up on Fitzpatrick, who was placed on the NFL’s reserve/COVID-19 list on Monday.

“I talked to him today,” Edmunds said. “He said he’s doing well, and just getting back healthy again.”

Fitzpatrick played in Sunday’s home tie with the Detroit Lions, but he entered the COVID-19 protocol the following day. Teams are not required to release information on whether players are vaccinated. If Fitzpatrick is, he would be required to be free of symptoms and have two negative tests 24 hours apart. If he is not vaccinated, the playmaking defensive back could be sidelined for at least 10 days.

Steelers coach Mike Tomlin said Tuesday that he “doesn’t anticipate” having Fitzpatrick in the lineup for Sunday’s road game against the Los Angeles Chargers. He also said that the Steelers may use multiple players to replicate the talented Fitzpatrick’s multi-faceted role on the defense.

“It’s definitely an adjustment, just whenever you have anyone that’s a key starter on our defense,” Edmunds said. “It’s just the next man-up mentality now. We have to have guys step up in big ways to come out and help us win the football game.”

Pittsburgh acquired Fitzpatrick in an early season trade with Miami in 2019. Fitzpatrick, a two-time All-Pro, has nine interceptions in three seasons with the Steelers.

While Fitzpatrick doesn’t have any interceptions yet this season, he still commands a presence on the back end of the Steelers defense.

“He definitely makes an impact, just because of his leadership out there,” Edmunds said. “He’s a very vocal guy. He’s a guy you can still count on being in the right spots. Even though he doesn’t have the interceptions or turnovers that people may want him to have, he’s still playing good football for us.”

Edmunds and Fitzpatrick were both selected among the first 28 picks of the 2018 draft.

The chemistry is evident. Edmunds admitted that the two can share a glance in the secondary and know what the other is thinking.

“I think we grew together like that,” Edmunds said. “We got more and more comfortable each year. We got better together. We definitely have that bond on the field.”

For this week at least, Edmunds could be without his running mate.

Edmunds, who has made 52 starts in 56 games with Pittsburgh, is playing for a job in 2022 after the Steelers opted not to pick up his fifth-year option.

Edmunds has been steady so far in 2021. He had the Steelers’ first interception of the season when he picked off the Bengals' Joe Burrow on a pass tipped by Fitzpatrick. He also made a career-best two tackles for loss twice this season, including last Sunday against Detroit.

Edmunds understands it will be different without Fitzpatrick on the field against the Chargers, but he’s ready to embrace the challenge.

“Of course not having your partner in crime out there is always tough,” Edmunds said. “I have to go out there and try to help the team to the best of my ability.”

NOTES: Steelers WR Chase Claypool (toe) was limited in practice on Wednesday, while LB T.J. Watt (hip/knee), CB Joe Haden (foot), OL Trai Turner (ankle) and OL Kevin Dotson (ankle) did not practice. Tomlin said that Watt, who was injured in the third quarter on Sunday, could play against the Chargers. Claypool missed Sunday’s game, while Haden, Turner and Dotson all sustained in-game injuries. There wasn’t an update on QB Ben Roethlisberger, who is also in the COVID-19 protocol, but could play Sunday, provided he gets the required negative testing to be available.