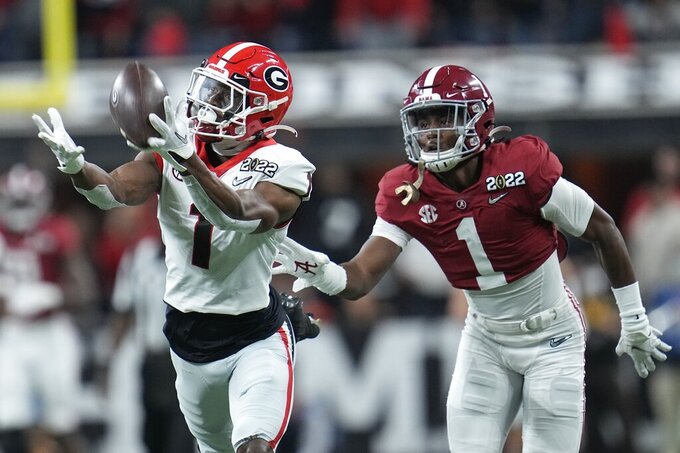 FILE - Georgia's George Pickens catches a pass in front of Alabama's Kool-Aid McKinstry during the first half of the College Football Playoff championship football game. Monday, Jan. 10, 2022, in Indianapolis. Pickens is a possible pick in the NFL Draft. (AP Photo/Paul Sancya, File)

PITTSBURGH (AP) — The on-the-fly retooling of the Pittsburgh Steelers offense is nearly complete.

Outgoing general manager Kevin Colbert ended his 20-plus-year tenure with the organization by investing heavily in offensive skill players in his final draft, with the hope that his still-unnamed successor is well-positioned for the future.

"(Colbert's) impact on us will continue to be felt, played out in the lives of the men we selected,” coach Mike Tomlin said.

Throw them into the mix with the top of the 2021 draft class that featured running back Najee Harris and tight end Pat Freiermuth and it's clear the Steelers have loaded up on young and relatively inexpensive talent (at least in the short-term).

Now comes the hard part: making it all fit together. The quicker the better.

The Steelers are making a point to give Pickett — taken with the 20th overall pick on Thursday — everything he needs to hit the ground running whenever Tomlin ultimately hands him the keys to coordinator Matt Canada's offense.

That may come as soon as Week 1, though it's more likely Pickett starts his rookie season on the bench behind Mitch Trubisky — who signed as a free agent in March — or Mason Rudolph. That's the small picture.

Zoom out and Pickett will be given every last chance to succeed as the long-term answer to Ben Roethlisberger's retirement. How that pans out won't be known for years.

If things get sideways, as it did for Trubisky in Chicago after the Bears took him second overall in 2017, no one will be able to say it's because the Steelers didn't try to give him all the playmakers necessary to keep up in today's points-happy NFL.

Pittsburgh overhauled the offensive line for a second straight offseason, signing free agents James Daniel and Mason Cole, cutting Zach Banner and re-signing right tackle Chukwuma Okorafor. The Steelers dealt with the departure of wide receivers JuJu Smith-Schuster and Ray-Ray McCloud by drafting the 6-foot-3 Pickens and the 5-7 Austin and grabbing return specialist Gunner Olszewski and 6-4 Miles Boykin on the cheap on the open market.

“The more weapons, you have the better,” Canada said. “The more competition you have in your room, the better. We’re excited.”

There's a very real chance the oldest offensive starter in the 2022 season opener will be the Trubisky, who turns 28 in August. Compare that to the 2020 opener which included five starters in their 30s — quarterback Roethlisberger, tight end Vance McDonald and offensive linemen Maurkice Pouncey, David DeCastro and Alejandro Villanueva.

If Pickett wins the job out of training camp, Pickens emerges as the No. 3 receiver and Cole gets the nod at center, the combined career starts for Pittsburgh's Week 1 lineup would be 244 — or three less than Roethlisberger made during his 18-year career. The Steelers added another arm for training camp by drafting South Dakota State quarterback Chris Oladukon in the seventh round.

Pittsburgh appears to be banking on the return of veteran defensive tackle Tyson Alualu to help shore up a unit that finished last (32nd) against the run in 2021. The Steelers did take Texas A&M's DeMarvin Leal in the third round, but the 6-4, 283-pound Leal doesn't fit the mold of a run stopper. That job will likely fall to Alualu, who missed almost all of last season after fracturing his ankle, and Montravius Adams, who agreed to a two-year deal in March after coming over in a trade last fall.

While defensive coordinator Teryl Austin likes Leal's versatility, Leal is built more like a defensive end and is coming off a season in which he racked up 8 1/2 sacks.

Leal's potential impact in 2022 could depend on whether Stephon Tuitt opts to play. Tuitt sat out all of 2021 following knee surgery and the death of his younger brother in a hit-and-run accident.

The Steelers added Ole Miss linebacker Mark Robinson in the seventh round. Robinson began his college career as a running back at Southeast Missouri State and Presbyterian before moving to the other side of the ball.

Austin runs a 4.32 40-yard dash, but he prides himself more on his toughness. It takes a certain kind of swagger to play football at 170 pounds. Austin believes he has it, thanks in part to a little tough love from his family.

“I have a whole bunch of older cousins and we would go to the park and play tackle football all the time and from that point on, I’ve just always been tough because they wouldn’t take it easy on me,” he said. “I’m the type where I like to show off myself. If I do get hit or anything like that, I’m the type that wants to get right back up fast and go through it again.”

ALL IN THE FAMILY

Eleven years after taking defensive end Cam Heyward in the first round of the 2011 draft, the Steelers selected Heyward's little brother Connor in the sixth. The younger Heyward transitioned from running back to tight end at Michigan State and is likely to be a hybrid of sorts.

“Guess I've got a roommate,” Cam Heyward tweeted shortly after his brother was chosen Sunday.

The addition gives the Steelers four sets of brothers on the roster. The Heywards join T.J. and Derek Watt, Trey and Terrell Edmunds and Carlos and Khalil Davis.