Steelers focus on physicality in early rounds of NFL draft 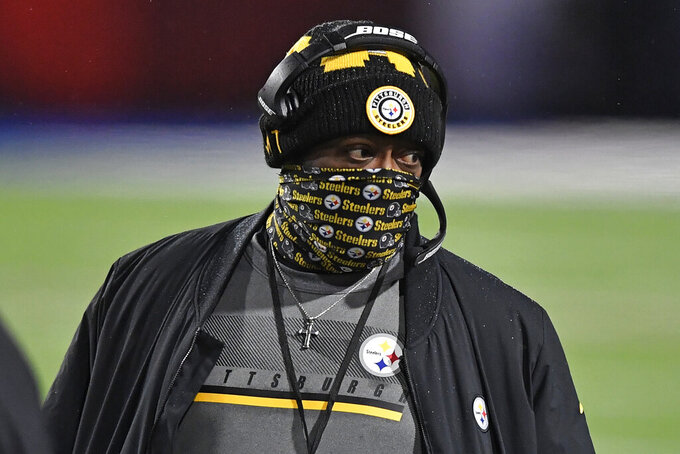 FILE - Pittsburgh Steelers head coach Mike Tomlin walks on the sideline during the first half of an NFL football game against the Buffalo Bills in Orchard Park, N.Y., in this Sunday, Dec. 13, 2020, file photo. The Steelers have the 24th overall pick in the draft and could use it to find a replacement for longtime Pro Bowl center Maurkice Pouncey, who retired during the offseason.(AP Photo/Adrian Kraus, File)

PITTSBURGH (AP) — The Pittsburgh Steelers headed into the offseason intent on finding ways to become a little less reliant on quarterback Ben Roethlisberger.

The AFC North champions used their top picks in the 2021 draft on players they believe can provide the offense with a dash of physicality it lacked while wilting down the stretch last season.

Harris was a workhorse at running back during his senior year at Alabama on his way to helping the Crimson Tide win the national championship. Freiermuth is a throwback of sorts, a tight end who is just as comfortable taking on a defensive end as a blocker as he is running by a linebacker in the passing game. And Green gives the Steelers a young prospect at center following Maurkice Pouncey's surprise retirement in February.

The picks are designed to address a running game that finished dead last (32nd) in the NFL in 2020 in both yards and yards per carry.

“Obviously, the run game was something that wasn’t so good last year, but us as a team and now that I’m here, we are trying to find ways to work on that and make it be better,” Harris said following a whirlwind tour of the team's practice facility on Friday, less than 24 hours after being taken with the 24th overall pick. “I’m just glad that I am here and I’m a Steeler.”

So is Freiermuth. He thought he was getting pranked by one of his Penn State friends when his phone buzzed with Pittsburgh's familiar “412” area code during the second round on Friday night.

When Freiermuth picked up, coach Mike Tomlin was on the other end to welcome him to a team that is looking for a versatile weapon after veteran Vance McDonald retired in January.

While the call wasn't a joke, it was a bit of a surprise. The Steelers entered the draft seemingly in serious need of help along the offensive line after Pouncey walked away and left guard Matt Feiler and left tackle Alejandro Villanueva hit the open market in free agency.

Yet rather than use one of their top two picks to address depth issues on the line, they waited until the third to take Green. An All-Big Ten selection as a senior, the 6-foot-2, 305-pound Green was a three-year starter at Illinois and can play both center and guard,

Harris seems to fit the mold of former Steelers star Le'Veon Bell, who spent the first five years of his career as one of the most versatile running backs in the league before leaving in free agency. Harris had 294 touches (251 rushes, 43 receptions) last fall, scoring 30 total touchdowns in the process.

“I liked how (Bell) was lined up wide (in the NFL),” Harris said. “I feel like I can do all of that stuff, if not better. I’m excited to learn more.”

So is Freiermuth, who caught 23 passes for 310 yards and a touchdown during his final season at Penn State in 2020. He appeared in just four games for the Nittany Lions before going down with an injury. Freiermuth underwent shoulder surgery but said he is fully healed and he's been cleared for full football activities.

The 22-year-old Freiermuth joins a tight end group light on experience outside of veteran Eric Ebron.

While Ebron is basically relegated to pass-catching duties, Freiermuth is a little more old school. He served primarily as a blocker as a freshman but still caught eight touchdowns on just 26 receptions. He added seven more scores as a sophomore and chose to play last fall even though he was already considered a coveted draft prospect.

It's a decision Freiermuth doesn't regret even with his season cut short due to injury.

“I’ve said this multiple times, I owe that university more than it owes me,” Freiermuth said. "I have no regrets about going out there and playing this season and getting hurt ... it’s the first major injury I ever had and hopefully the last one.”

The move follows the path the Steelers went down a year ago, when they selected wide receiver Chase Claypool in the second round and centered most of their offseason moves on trying to give Roethlisberger plenty of options.

The 39-year-old quarterback has opted to return for an 18th season in 2021. Whether it's a swan song remains to be seen, but the 6-foot-5 Freiermuth's arrival does give Roethlisberger another big red zone target.

“It’s kind of weird that he’s going to be my quarterback now,” Freiermuth said. "I can’t wait to go out there and catch footballs from him.”