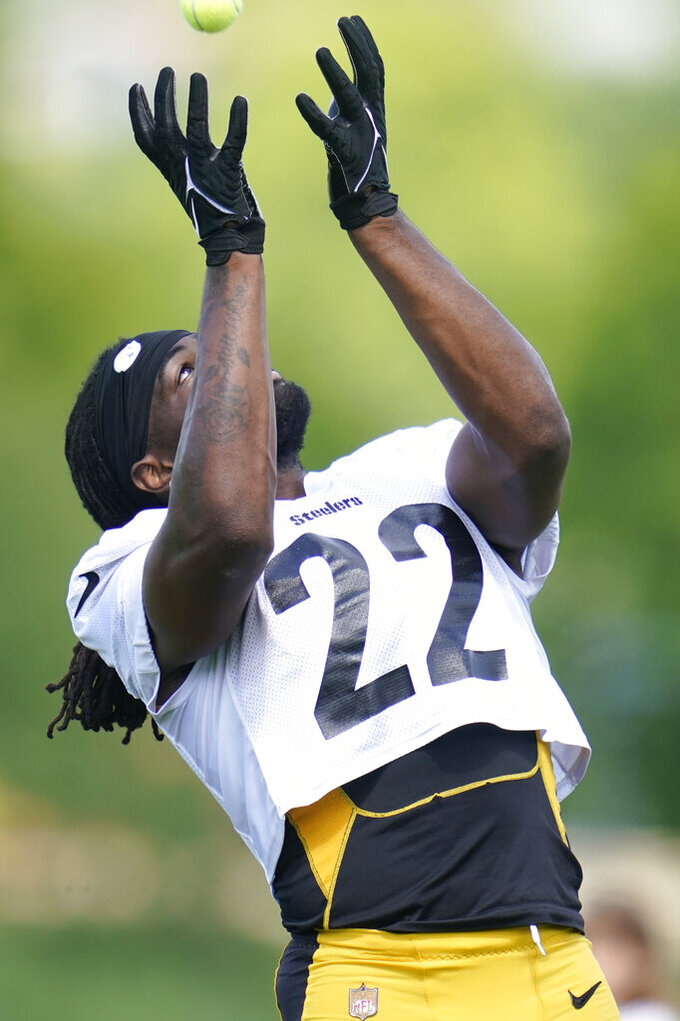 Harris has been slowed by a foot injury during his second training camp with the Steelers. But the brief summer setback has allowed Harris an opportunity to pause from the daily on-field training camp practice grind and expand his leadership role.

“It has been a blessing in disguise in a way ... not to get hurt, but to see the other younger guys get more reps,” Harris said. “It has been pretty frustrating, but it’s good though. There have been a lot of other guys who come in here and we get to see their skillsets.”

Last season, Harris led the NFL with 381 touches and finished second in yards after contact behind only Indianapolis' Jonathan Taylor.

Harris, the No. 24 overall pick in 2021, certainly welcomes a heavier workload, but he’s also expressed his desire to see the Steelers find a complementary back.

Benny Snell and Anthony McFarland are the leading candidates to fill in behind Harris.

Snell, a 2019 fourth-round pick, is entering his fourth season with the Steelers. The 5-foot-10, 224-pound Snell has played in 46 games with five starts in three seasons. He has rushed for 892 yards and six touchdowns on 255 carries.

McFarland, a 2020 fourth-round selection, is entering his third year with the Steelers. The 5-foot-8, 193-pound change-of-pace back has appeared in 13 games.

“Anthony is really controlling the role he has and he’s really been making explosive runs,” Harris said. “Benny, being the veteran, he’s a reliable guy and that’s the kind of stuff you expect from Benny. Anthony and Benny have been looking great all camp. I think everybody in the running back room has looked great all camp.”

Harris hurt his foot during the Steelers first padded practice and he’s missed the team’s last four workouts since. Harris shrugged of the severity of his injury on Saturday and noted that he’s been rehabbing his foot and swimming in the pool while sidelined.

“I wouldn’t be walking if it was serious,” Harris said. “(But), I injured it and that’s why I’m not practicing.”

“I just want to be better than last year,” Harris said. “Not stat-wise, but just as a person. I want to be someone the team can rely on. On-field wise, I think the expectation and the standard has already been set for what I need to achieve. We’ll wait until (the first game against) the Bengals for that to happen.”

Steelers coach Mike Tomlin also wants to see Harris take on a greater leadership role this season. But he doesn’t feel that will be an issue for the second-year running back.

“It is naturally in his wheelhouse,” Tomlin said. “It is something that just oozes off of him. It’s just him. It’s in his personality. I imagine he’s been that on every team he’s ever been on in his lifetime, so it’s a natural act for him.”

NOTES: Friday night’s special practice at a local high school football stadium was canceled because of inclement weather and flooded field conditions forced the team to move Saturday’s workout from St. Vincent College back to Pittsburgh. The Steelers didn’t practice on Sunday. The Steelers have four practices before their first preseason game on Saturday at home against Seattle.