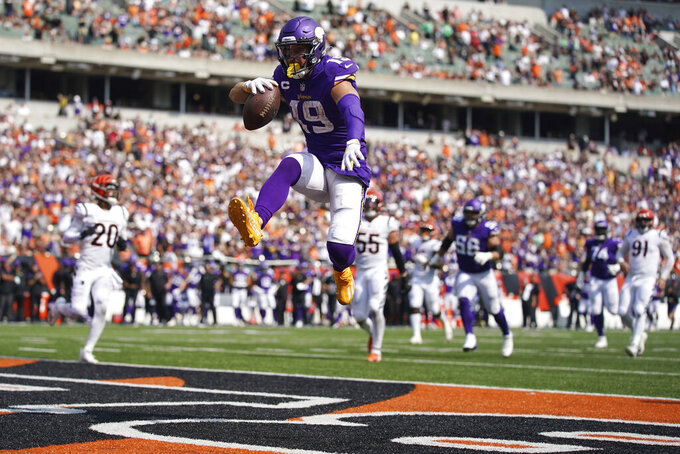 Minnesota Vikings wide receiver Adam Thielen (19) leaps into the end zone with the ball to score a touchdown in the third quarter of an NFL football game against the Cincinnati Bengals, Sunday, Sept. 12, 2021, in Cincinnati. (Andrew Souffle/Star Tribune via AP)

It’s the second week of the NFL season, and scoring is already at a breakneck pace. These players are my best bets to continue the trend at the running back and wide receiver positions in Week 2.

Harris wasn’t able to get much going against the Bills in Week 1, as the Bills’ front brought major pressure, but he should have a much better game against the Raiders in Week 2. Las Vegas allowed two rushing TDs in Week 1, along with some gashing runs. What Harris has going for him more than anything is his snap count. Harris was on the field for every offensive play the Steelers ran in Week 1, and I don’t expect that to change this week. If the Steelers are in scoring position, Harris will be there.

Chubb is one week in, and he’s already tied for the most rushing TDs (two) in the league. This week he faces a Texans team that allowed 21 rushing TDs in 2020, the most of any team in the NFL. With a 59.70% TD dependency, the highest of any RB with more than 10 touches in Week 1, Chubb is primed to score in Week 2.

Jones and the Packers offense were stymied in Week 1 by a formidable Saints defense, but they will face much less resistance this week from a Lions team that was just routed by the 49ers last week. Detroit allowed the second-most rushing TDs in 2020 (19) and they led in receiving TDs by RBs allowed (10).

2020’s TD (21) leader, Kamara will continue to carry the Saints offense this season, especially with Michael Thomas out for awhile. Kamara goes up against a Panthers defense this week that was in the top 10 for opposing RBs last season, giving up 14 scores in 2020. With a TD dependency of 39.74% after just the first week of play, Kamara is in good shape to reach the end zone at least once in Week 2.

Najee Harris was the only RB to play more snaps than Henderson in Week 1, as the third-year Ram played 94% of his team’s offensive snaps. The Rams play the Colts this week, a team that is usually stout against the run, but Indy allowed a healthy 5.7 yards-per-carry average to Chris Carson so Henderson should have some room to run. With a 40.82% TD dependency going into Week 2, Henderson makes for a strong bet to score.

Tied for sixth in receiving TDs (10) in 2020, Metcalf is off to a fast start this season having already scored in Week 1. This week, he’ll face a Titans team that just gave up four receiving TDs against the Cardinals, so with a TD dependency of 50% he can be expected to hit the end zone.

Justin Jefferson may be the 1A in the Vikings’ receiving group, but Thielen is the trusted red zone target, scoring twice already in Week 1. It helps that TE Irv Smith is out for the season. With a TD dependency of 56.6%, and being on the field 94% of snaps in Week 1, Thielen is as strong a bet to score as you can get going into Week 2.

Robinson started his 2021 season slowly, but all that will change in Week 2 when the Bears go up against a Bengals team that allowed the fifth-most TDs (20) to receivers in 2020. Cincinnati has already given up another two receiving TDs in Week 1, and with QB Andy Dalton feeling the heat from rookie QB Justin Fields, expect the Bears to come out swinging this week. Robinson played more than 90% of his team’s snaps in Week 1, so expect his number to get called early and often.

No team allowed more TDs (27) to receivers in 2020 than the Cowboys, and that’s the team that Allen and company are facing at home in LA this week. With 13 looks in Week 1, Allen will continue to be a big target this week against a Cowboys secondary that still hasn’t found its footing, if their high-scoring matchup with the Buccaneers is any indication. Allen could get at least one score in Week 2.

Hopkins scored twice in Week 1 against an overmatched Titans secondary, and he’ll continue to roll in Week 2 against a Vikings team that just allowed 22 catches, 250 yards and two TDs to the Bengals last week. With a TD dependency of 59.11%, and the hottest QB in the NFL going into Week 2, Hopkins makes for a potential scoring machine this week and many more to come.