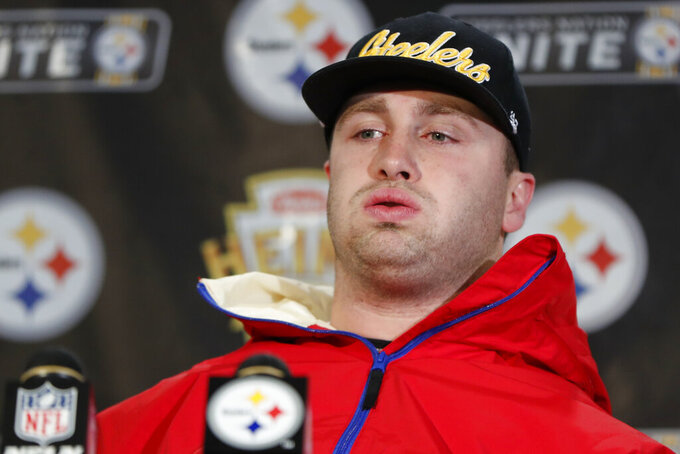 PITTSBURGH (AP) — Rookie quarterback Devlin Hodges has been a Cinderella story for the Pittsburgh Steelers this season, as the undrafted and unheralded passer pulled himself from the bottom of the depth chart into a starter’s role. His play also lifted the team out of an early slide and into playoff contention.

But while Hodges has garnered headlines, the Steelers won seven of eight entering Sunday night’s game against the Buffalo Bills mostly by playing exceptional defense and mistake-free offensive football.

On Sunday, the Bills threw a wrench in that plan, forcing three early Pittsburgh turnovers and gaining a seven-point lead late.

Needing the offense to come from behind and win the game, the Steelers and Hodges misfired, as he was intercepted twice in the end zone in the final two minutes of a 17-10 loss to the Bills.

Hodges was intercepted four times in the game, tripling his career total and set a new career low with a 43.9 passer rating.

While winning Hodges’ first three starts, the Steelers didn’t need to make a big comeback bid like the one they attempted on Sunday. Pittsburgh never trailed in the second half in wins over Arizona, Cleveland and the Los Angeles Chargers.

“There’s a lot of new guys and a lot guys who had to step up, a lot of guys with good opportunities,” Vannett said. “Those are the toughest ones to swallow and all we can do is get back in the facility (Monday), watch the film, make the corrections and finish out the season the way we want to.”

Despite the loss, the Steelers, now 8-6, still control their AFC playoff destiny with two games to play. Wins at the New York Jets and Baltimore Ravens over the final two weeks would assure Pittsburgh of a postseason berth, and the Steelers even have scenarios where a 1-1 finish will get the job done.

“There’s a lot of stuff we’re going to have to clean up from this past game that I’m sure we’re going to see moving forward from other teams, especially offensively, with what they threw at us defensively,” veteran offensive lineman Ramon Foster said. “It’s not over. We’re still in this.”

Foster said the feeling amongst the offense is that the Steelers’ defense has continued to play at a championship level, and that the offense has not always held up its end of the bargain. In each of Pittsburgh’s last two losses, they’ve failed to score more than one offensive touchdown.

It’s not that they didn’t have opportunities. Against the Bills, James Conner and Johnson fumbled an exchange at the nine-yard line late in the second quarter, and Hodges was intercepted in the end zone twice late in the fourth quarter. One more play or one fewer mistake might have been the difference in the game.

“Small mistakes turn into big mistakes,” Foster said. “We didn’t capitalize on our position on the field. We just have to be better. We have to support our defense a whole lot better offensively, that’s for sure.”

That defense held Buffalo to 261 total yards, the seventh time this season and the fifth straight game that it held an opponent below 300 yards of total offense. The Steelers lead the NFL in sacks and are second in interceptions and fumbles recovered.

But they can’t do it alone.

“I just have to focus on next week,” Hodges said. “Go in there, learn, get better and shake it off.”