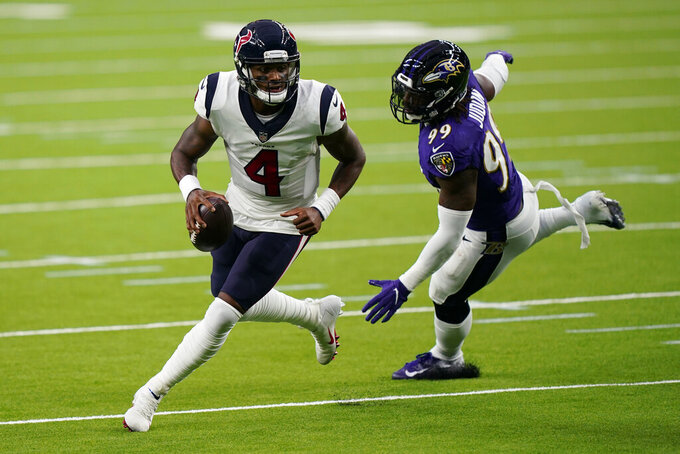 PITTSBURGH (AP) — The pieces to compete for a Super Bowl are all there. The Pittsburgh Steelers are sure of it, just as they have been for most of quarterback Ben Roethlisberger's career.

It's the main reason the 38-year-old came back from right elbow surgery this season rather than retire. And through two weeks, the Steelers (2-0) have the look of a contender behind a relentless defense and an offense guided by a star who hardly looks rusty despite an extended layoff.

Yet rather than exhale about a return to normal following a chaotic 2019, Roethlisberger and his teammates are sweating the details ahead of a visit on Sunday by winless Houston (0-2).

Coach Mike Tomlin brought in officials to practice this week to help a group flagged 10 times in a win over Denver. The defense is looking to close the brief holes the Broncos opened in the running game. Roethlisberger spent his “off” day fine-tuning his footwork with quarterbacks coach Matt Canada, well aware his margin for error isn't as big as it used to be.

“I’ve gotten away with it in the past being able to not necessarily be perfect from the ground up and just letting my arm kind of make up for a lot of things, a lot of imperfections if you talk to quarterback people,” said Roethlisberger, who will appear in his franchise-record 221st career game.

“If I’m having these issues and we are still winning football games, that’s a plus."

It's a luxury the Texans haven't been afforded during a brutal early season gauntlet that began with losses to Kansas City and Baltimore. Things don't figure to get any easier on the road at a place where the franchise has won just once.

“That’s all we can do is just put our head down and grind,” Watson said. "Just work and try to do what we do and see what the outcome comes like. Of course, we don’t want to be 0-3, but that’s not the main thing that’s on our minds right now.”

The Texans emerged from 0-3 to win the AFC South in 2018. Asking a group still searching for an identity following an offseason overhaul that included sending All-Pro wide receiver DeAndre Hopkins to Arizona might be asking for too much.

The Watts will hold a family reunion at Heinz Field when Houston defensive end J.J. Watt shares the field with little brothers Derek and T.J., both of whom play for the Steelers. It's the first time the brothers — who co-hosted the game show “Ultimate Tag" during the offseason as well as starring with their mom Connie and dad John in a series of “Subway” commercials — will participate in the same game, well at least one not played in the backyard back home in their native Wisconsin.

“To have all of us on the field at the same time in the same game, it really doesn’t get any better than that," J.J. Watt said.

It's the second time since 1927 three brothers have appeared in the same NFL game, though it's also the second time in 10 months. Pittsburgh safety Terrell Edmunds and running back Trey Edmunds played youngest brother Tremaine Edmunds last December when the Steelers faced Buffalo.

WHAT’S UP WITH WILL

There are questions about what’s going on with Houston’s top receiver Will Fuller after he didn’t have a reception last week against Baltimore after finishing with eight receptions for 112 yards in the opener. Fuller participated in 63 percent of Houston’s offense plays against the Ravens but was not targeted once and looked like he was struggling to run routes at times. Coach Bill O’Brien deflected questions about his health this week and he was not listed on the injury report. Fuller has been slowed by injuries throughout his career, but the Texans were counting on him to have a big season this year after DeAndre Hopkins was traded to Arizona in March.

"Having him back is huge for us because Dave is a pro,” Steelers receiver JuJu Smith-Schuster said. “He’s a vet. This is what he does, and he’s been doing it for a very long time.”

Watson is the first player to reach 10,000 yards passing (10,244) and 1,000 yards rushing (1,277) through their first 40 games in NFL history. Watson has thrown for 528 yards with two touchdowns and two interceptions this season and is looking to do more to help the offense improve and help the team get in the win column.