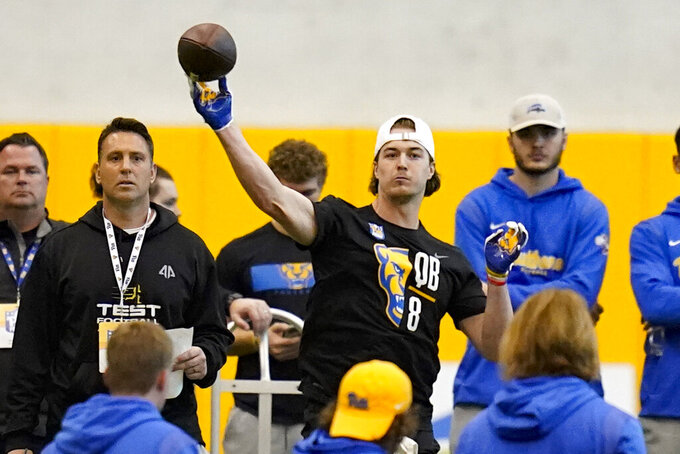 PITTSBURGH (AP) — The Pittsburgh Steelers sensed months ago they'd be in the market for a quarterback for the first time in a generation.

So general manager Kevin Colbert and the team's scouting staff fanned out across the country last fall and over the winter, watching some of the best collegiate players at the position in person as many times as possible, then bringing seven of them to Pittsburgh for yet another round of vetting in the run-up to this week's draft.

While Colbert remains as poker-faced as ever in terms of where the Steelers might be leaning with the 20th overall pick on Thursday night — that is, if Pittsburgh stays put — he and coach Mike Tomlin readily admit they've given the group that includes Liberty's Malik Willis and Pitt star Kenny Pickett as “comprehensive” a look as possible.

That means more than just looking at tape or giving them the eye test. It means engaging with them on a personal level on multiple occasions to get a feel for which ones have the things that don't show up on game tape while playing what Colbert called the most “critical” position in the sport.

Any player taken in the first round faces an added layer of pressure that prospects taken later on do not. That pressure is multiplied by multiple factors when the pick happens to be a quarterback. If the Steelers do decide to use 20th selection on a quarterback for the first time since taking Ben Roethlisberger with the 11th choice in 2004, all the rookie has to do is come to a new place, learn a new system in a matter of months then beat out Mitch Trubisky and Mason Rudolph for the right to replace a future Hall of Famer.

Oh, and they'll likely have to win almost immediately at a place that hasn't endured a losing season since 2003.

No pressure or anything. No wonder the Steelers used nearly a quarter of the 30 pre-draft visits they're allowed on quarterbacks, meetings where they didn't ask them to throw a 20-yard out but instead picked their respective brains on their thought process.

“Some of (the factors) are not football-related, but personality-related,” Tomlin said. “Some people are introverted, extroverted and (media attention) are draining for them, etc. And so for us, it was, yes, getting to know them as players. But just as significant a component of it ... was getting to know them as young people as well.”

Colbert, who will retire sometime after the draft, feels good about the track the organization is on. The Steelers re-signed safety Terrell Edmunds to a one-year deal on Monday, a move that means on paper they have at least one veteran starter at all 22 positions.

That includes at quarterback. Pittsburgh brought Trubisky — the No. 2 overall pick by Chicago in 2017 who spent last season as the backup to Josh Allen in Buffalo — in on a two-year deal in free agency. Dwayne Haskins' tragic death on a Florida highway earlier this month leaves Rudolph as the only quarterback on the roster with any experience with offensive coordinator Matt Canada. The organization participated in a memorial service for Haskins last Friday, and Tomlin declined to delve into any impact Haskins' passing might have on the business of football.

While Colbert said the team could roll with just two quarterbacks, simple math indicates at least one and likely two more will need to be drafted or signed before organized team activities begin.

Tomlin likened Pittsburgh's uncertainty at quarterback this season to where it stood at the same time last year in regards to running back. The Steelers drafted Najee Harris in the first round and he set a franchise rookie record for yards rushing during an occasionally dazzling first season.

Now, the stakes are considerably higher to perhaps find someone who can excel at what Tomlin called “the ultimate competitor's position.”

“Those that run to and not from competition, those that embrace competition and the intensity of it and the anxiety may be associated with it. I think they have a leg up,” he said.