Steelers planning on Roethlisberger's return in 2021 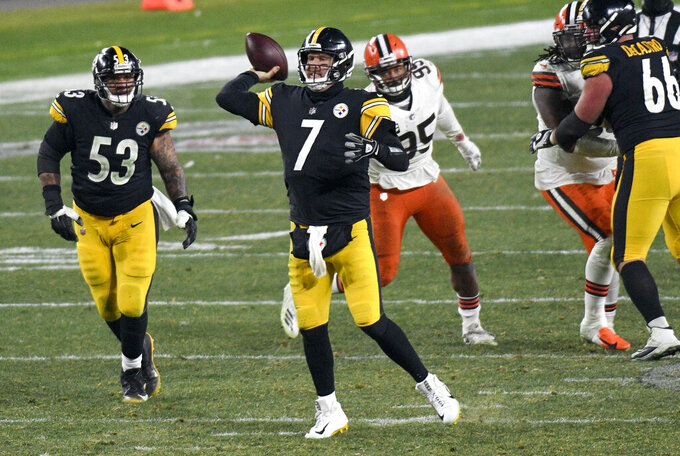 PITTSBURGH (AP) — The Pittsburgh Steelers plan on having quarterback Ben Roethlisberger back for an 18th season.

Team president Art Rooney II released a statement Wednesday saying he and Roethlisberger have met to figure out a way to ease the financial pressure caused by Roethlisberger's contract.

Roethlisberger, who turns 39 next month, carries a $41 million salary cap number for 2021 and is due a $15 million roster bonus on March 20, shortly after the new league year begins.

Rooney called the meeting with Roethlisberger “productive," adding it allowed the two sides to “discuss a lot of things that relate to where we are and where we want to go.”

The Steelers went 12-4 and won the AFC North in 2020 but faded down the stretch. Pittsburgh lost five of its final six games following an 11-0 start, including a playoff loss to Cleveland in which Roethlisberger threw four interceptions.

The Steelers are facing a serious cap crunch and have already started to overhaul the coaching staff and the roster. Center Maurkice Pouncey and tight end Vance McDonald, both close friends of Roethlisberger, have retired. Offensive coordinator Randy Fichtner, who also is close to Roethlisberger, was let go. More moves are on the way with wide receiver JuJu Smith-Schuster, outside linebacker Bud Dupree and left tackle Alejandro Villanueva among the team's 19 pending free agents.

“We would like to have (Roethlisberger) back to help us win a championship,” Rooney said.