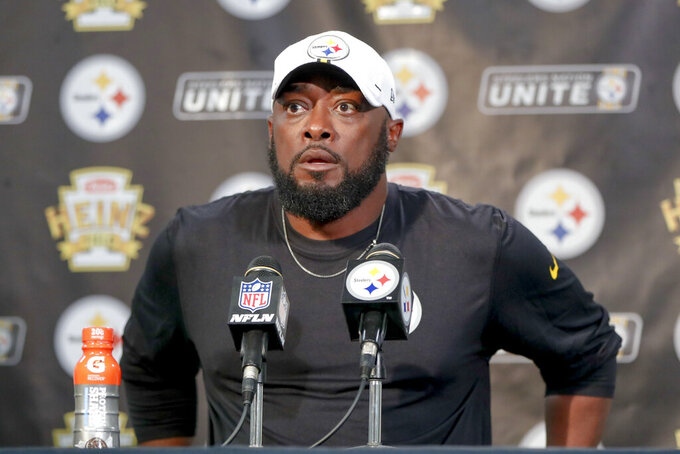 FILE - In this Aug. 9, 2019, file photo, Pittsburgh Steelers head coach Mike Tomlin arrives for a news conference after an NFL preseason football game against the Tampa Bay Buccaneers in Pittsburgh. Tomlin’s seat isn’t hot, but the decision to sign him to a one-year extension through 2021 (with an option for a second) instead of something longer term sent a message that being a contender might not be good enough. (AP Photo/Keith Srakocic, File)

Strengths: Brown might be gone after eight record-setting seasons but Steelers believe offense can keep on humming. Much will depend on WR JuJu Smith-Schuster handling No. 1 duties with Brown in Oakland, and second-year WR James Washington proving breakout preseason was no fluke. Improved run/pass balance would help. RB James Conner reached Pro Bowl last season but also missed time due to injuries. Defense has led NFL in sacks each of last two seasons, and OLB T.J. Watt has shown he's nearly as effective as older brother J.J. at disrupting opposing offenses.

Weaknesses: All those sacks, however, didn't translate to turnovers. Steelers had just 15 takeaways in 2018, one of major reasons behind 2-4 slide to end season that finished with Pittsburgh on outside of playoffs for first time since 2013. Pittsburgh splurged in free agency, bringing in Nelson from Kansas City and signing Barron to provide some veteran leadership at inside linebacker. Special teams were mess in 2018, highlighted by kicker Chris Boswell's year-long funk in which he converted just 13 of 20 field goals one year after making Pro Bowl. Boswell was sharp during training camp, but it won't matter if he can't bring that momentum into regular season.

Fantasy Players To Watch: TE Vance McDonald. Roethlisberger has long loved tight ends (see Miller, Heath) and has developed close relationship with McDonald since Pittsburgh acquired him on eve of 2017 regular season. McDonald caught career-high 50 passes in 2018 and that number should only rise as Roethlisberger looks to spread around 168 targets vacated by Brown's departure.

Expectations: While expectations outside of Pittsburgh have been lowered — five AFC teams have better odds to reach Super Bowl according to Vegas odds-makers — "the standard remains the standard" to borrow one of coach Mike Tomlin's favorite phrases. Though his seat isn't "hot," fact he received just one-year extension (instead of two or more) through 2021 offers proof he needs to show he firm grasp on locker room after team's ugly divorce with Brown. Offense should be productive but Pittsburgh's season will likely depend on defense taking significant step forward.