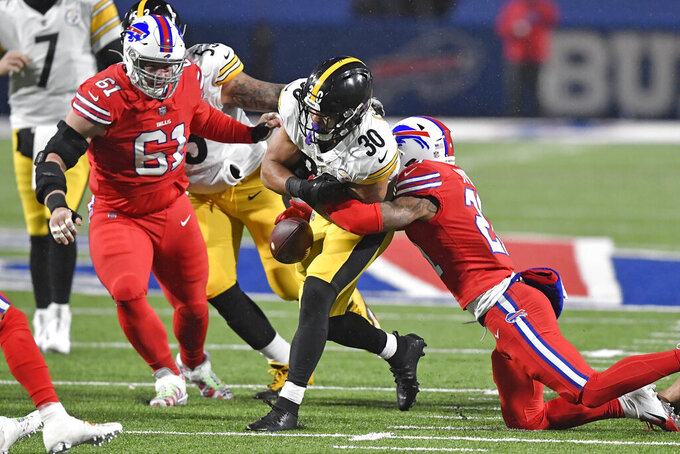 Buffalo Bills free safety Jordan Poyer, right, forces a fumble by Pittsburgh Steelers running back James Conner (30) during the first half of an NFL football game in Orchard Park, N.Y., Sunday, Dec. 13, 2020. The ball was recovered by the Steelers. (AP Photo/Adrian Kraus)

PITTSBURGH (AP) — The Pittsburgh Steelers will have to try to clinch the AFC North title with a new-look offensive line.

The Steelers (11-2) ruled out rookie left guard Kevin Dotson for Monday night's game against the Bengals (2-10-1). Dotson suffered a shoulder injury in last Sunday's loss to Buffalo after replacing starter Matt Feiler, who was lost for the season in the same game with a pectoral injury.

J.C. Hassenauer, who started two games at center earlier this season when Maurkice Pouncey was on the reserve/COVID-19 list, will likely take over at left guard.

Pittsburgh has dropped two straight following an 11-0 start but can still lock up the division title by beating the Bengals for the 12th straight time, or if Cleveland loses on Sunday night to the New York Giants.

The Steelers also have former seventh-round pick Derwin Gray and recently acquired Danny Isidora on the roster. Pittsburgh signed Isidora off the practice squad this week after placing Feiler on injured reserve.

Pittsburgh running back James Conner is questionable with a quad injury. Conner ran for just 18 yards on 10 carries last week after missing two games while being on the reserve/COVID-19 list. Benny Snell would likely start in Conner's place.