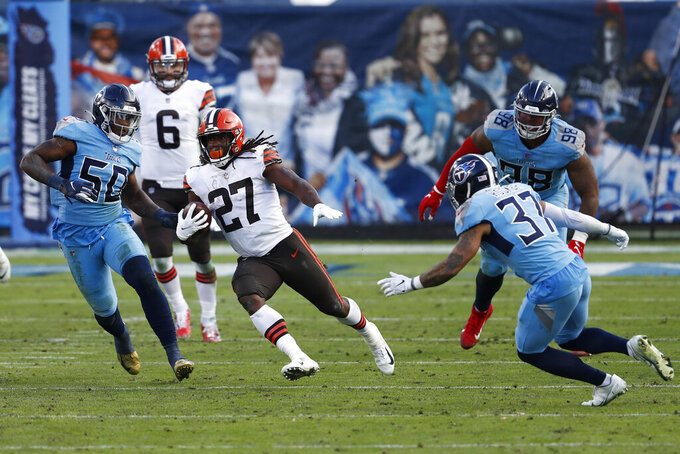 Cleveland Browns running back Kareem Hunt (27) tries to get past Tennessee Titans defenders Derick Roberson (50) and Amani Hooker (37) in the second half of an NFL football game Sunday, Dec. 6, 2020, in Nashville, Tenn. (AP Photo/Wade Payne)

Now that an undefeated season is gone, the Pittsburgh Steelers almost seem vulnerable. Losing at home to an NFC East team will give you that look.

The Steelers (11-1) suddenly see the vise closing in the race for the AFC's top seed and only playoff bye. They are tied with Kansas City, though Pittsburgh owns the tiebreaker for now. Cleveland in the Steelers' division is two games back, and those archrivals meet on the closing Sunday of the schedule.

And this Sunday, in prime time, Pittsburgh heads to Buffalo (9-3), the AFC East leader.

The Steelers can wrap up the AFC North with a win and a loss by Cleveland to Baltimore on Monday night. The Steelers will also clinch a playoff spot with a win or a loss by Las Vegas, Miami or Tennessee.

Buffalo also has some scenarios to get in this weekend, but must win.

“Coach (Mike Tomlin) always says five-star matchups and this, that and the other, but this is a very good football team,” Steelers quarterback Ben Roethlisberger says of the Bills. “We are going to their place, looks like crappy weather, night game, cold. All the perfect elements that come to playing playoff-caliber football teams and playoff-caliber situations this time of the year. It is a great test and challenge for us.”

The action began Thursday night with the Rams manhandling the Patriots, 24-3. Los Angeles (9-4) had six sacks in shutting down the offense for New England (6-7). Cam Akers rushed for a season-high for a 2020 rookie 171 yards and Kenny Young went 79 yards with an interception of Cam Newton.

Kansas City will clinch the AFC West with a victory or a tie, or a Raiders loss against the Colts. With a win, the Chiefs would have the best 13-game record in franchise history and would reach 12 wins for the third consecutive season, the longest streak in club history. Kansas City also could set a franchise record with its 10th straight road win.

The most recent time the Chiefs were in Hard Rock Stadium, in February, was slightly memorable.

“I think they have us in a different locker room on a different side of the field, so I think we were the home team for that one, be a little different picture," coach Andy Reid says, recalling the Super Bowl, "but I probably won’t reflect too much on it. I’m going to try to concentrate on these guys because they’re going to draw the attention, so for me at least and I think from our football team. It’ll be great to be back there ... I probably won’t think too much about the other part, no.”

The Dolphins have won seven of their past eight and their 12-game record is their best since 2003. It's mainly built on defense: Miami’s streak of at least one takeaway in 18 consecutive games is the longest in the NFL. Cornerback Xavien Howard made his NFL-leading eighth interception last week before he was ejected for throwing a punch. For the second time this year, Howard has an interception in four consecutive games to join Lester Hayes as the only players since 1970 with multiple four-game streaks in a single season.

Cleveland quieted critics with a sensational first half in its victory at Tennessee and can further solidify its AFC standing by taking down the Ravens. Baltimore routed the Browns 38-6 to open 2020; has rushed for at least 100 yards in 35 straight games, the third-longest streak in NFL history; and gets back tight end Mark Andrews after missing the past two games on the reserve/COVID-19 list. He led Baltimore in receptions last year and ranks second this season with 60, along with a team-high six TD catches.

For once, the Browns seem to have found the answer in coach Kevin Stefanski after, what, a million tries? Stefanski’s 12-game record is the best for a new Browns coach since Blanton Collier also went 9-3 in 1963.

Quarterback Tom Brady is 5-0 and has thrown for 1,311 yards with 10 touchdowns and two interceptions in five career starts against the Vikings with New England. He’s 14-4 in 18 career regular-season games following a bye, with 4,573 passing yards, 28 TDs and nine interceptions in those games.

Some numbers Vikings fans will like: Minnesota has won five of six to get back in the NFC playoff race. They have a 3,000-yard passer (Kirk Cousins), 1,000-yard rusher (Dalvin Cook) and 1,000-yard receiver (Justin Jefferson) in the same season for the eighth time in franchise history and in consecutive years for the first time since 1997-98.

Two teams in the AFC playoff chase, with the Colts in the mix for the South title along with Tennessee, and the Raiders seeking a wild-card spot from the West.

Las Vegas is fortunate to be in that position after needing a 46-yard touchdown pass from Derek Carr to Henry Ruggs III with 5 seconds to go at the winless Jets. And yes, your eyes don't deceive you: New York did go with an all-out blitz on that play.

Philip Rivers will make his 29th start vs. the Raiders, the most by any quarterback in the regular season. He has the most QB wins (18), TD passes (47) and passing yards (7,103) ever against the Raiders, all of it while with the Chargers.

The Packers can clinch the NFC North with a win and a loss by Minnesota at Tampa Bay. Beating Detroit is a matter of course for Aaron Rodgers, who is 16-5 against the Lions. A-Rod has thrown for an NFL-high 36 scores and is the league’s first player with 35-plus touchdowns in five seasons.

“I think that’s always the key to the Green Bay Packers, right?” Lions interim coach Darrell Bevell says. “Aaron Rodgers has been playing at a high level for a long time.”

Detroit scored two TDs in the final 2:18 at Chicago to win after being down 10 points in the fourth quarter in Bevell’s first game after replacing Matt Patricia. The Lions are one game behind an NFC wild-card spot, but their last four games are against Green Bay, Tennessee, Tampa Bay and Minnesota.

The Titans have won six of the past seven meetings. They are tied with Indianapolis atop the AFC South and hold the tiebreaker with a 3-1 division record.

Tennessee could run all over a weak Jaguars defense with league rushing leader Derrick Henry. Jacksonville has lost 11 straight, the longest single-season skid in franchise history. The team record is 13 in a row, set over the 2012-13 seasons.

The first-place Giants — yep, in the NFC East, that's reality — have taken four in a row, no win more impressive than at Seattle last week. Backup quarterback Colt McCoy played with Daniel Jones (hamstring) sidelined, and Wayne Gallman rushed for a career-high 135 yards as the running game produced a season-high 190 yards.

One reason the Cardinals have stumbled, losing four of five, is QB Kyler Murray, averaging 55.4 yards rushing for the season, has run for an average of 20.3 yards in three losses. Arizona should be helped as Larry Fitzgerald is back after the veteran wideout missed two games on the reserve/COVID-19 list.

Seattle safety Jamal Adams, who says he won't get into the hype of this game even though he basically created it, faces his former team for the first time. Adams forced a trade out of New York earlier this year. He was a first-round draft pick in 2017 and a 2019 All-Pro.

Adams leads Seattle with 7½ sacks. With one more he will move past Adrian Wilson for the most by a defensive back in a single season. Wilson had eight sacks in 2005.

For all of the Jets' weaknesses, they have scored on their opening drive in six straight games, the longest active streak in the NFL and tied for the longest string in franchise history. Still, they could become the first team since the 2017 Browns to be 0-13. Only eight teams since the 1970 merger have started 0-13.

New Orleans has won nine straight since a 1-2 start and has clinched a fourth straight playoff berth, with the NFC South title in reach. Oddly, the Saints are 8-0 over the past two seasons when QB Drew Brees has been sidelined with an injury. The Saints have won their past three games with Taysom Hill starting at quarterback and he figures to get the call at Philly.

Rookie Jalen Hurts gets that call for the slumping Eagles, who have dropped four in a row with Carson Wentz looking lost.

Washington has built its three-game winning streak on defense; those opponents have combined for a total of six points in the second half. In knocking off previously unbeaten Pittsburgh last Monday, DE Montez Sweat tipped three passes, including one that was intercepted to help seal the win.

QB Alex Smith will make his second start against the 49ers, who drafted him first overall in 2005. The only teams Smith hasn’t beaten in his career are the others he played for, San Francisco and Kansas City.

The Niners have committed at least two turnovers in six straight games, the longest active streak in the NFL and the longest for San Francisco since an eight-game string in 2008.

Atlanta has won all six meetings in the series as a visiting team. While Atlanta is one loss from its third straight losing season, which hasn’t happened since 1999-01, the Falcons are 4-3 under interim coach Raheem Morris, including 2-0 against AFC West teams.

The Chargers come off their worst loss ever, 45-0 to the Patriots. At home, no less.

Cincinnati's best chance to stop a four-game skid is on the ground against the league's worst run defense. But top RB Joe Mixon is sidelined.

Houston has won all four meetings, and with the Bears on a six-game slide in which the offense has sputtered, the Texans should be eager for this one. Making matters worse for Chicago, Texans DE J.J. Watt had a season-high four tackles for losses last week.

The Bears blew a late lead against Detroit and allowed 460 yards, with Matthew Stafford throwing for 402. So Deshaun Watson is looking good here.

How, uh, rocky have things gotten for the Broncos? They have lost four of their past five games, with another loss securing a fourth consecutive losing season for the first time since the 1960s and early ’70s. Denver would become the first Super Bowl champ to miss the playoffs five consecutive seasons following the title.

Carolina comes off a bye, yet eight players were placed on the COVID-19/reserve list this week, including WRs D.J. Moore and Curtis Samuel.