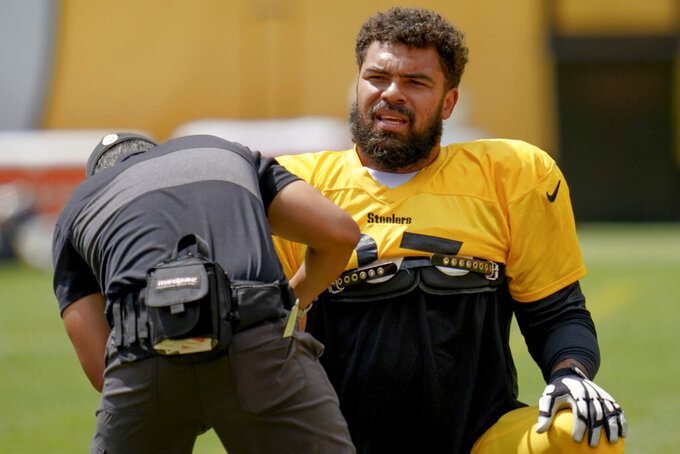 PITTSBURGH (AP) — Cam Heyward knew his father, Craig “Ironhead” Heyward, bounced around the NFL during a decade-plus career as a running back that saw him suit up for five different teams.

As much as Heyward admires his dad, he wasn't eager to follow him down that particular path.

Now, he doesn't have to. Not after the All-Pro defensive tackle signed a five-year contract with the Steelers that runs through 2024, when Heyward will be 35.

The deal eliminates some unwanted uncertainty for Heyward, who admitted he was ready for a "farewell" tour this season as he prepared to enter the final season of the current deal he signed in 2015. As late as Saturday afternoon, Heyward felt pessimistic something could be worked out.

A meeting with Steelers president Art Rooney early Sunday helped talks regain momentum. By Monday morning, the 31-year-old had a pen in his hand knowing he will likely be a Steeler for the duration of his career.

He's well aware of how rare such stability can be. He need only to look at his father's journey through a handful of cities — including one-year stops in three of them — as proof.

“There was a time where Atlanta was offering him a contract and he had just come off a Pro Bowl year and they were ready to go in a different direction,” Heyward said.

“And to be such a different situation than what my dad goes through, I always feel like I am competing against him and I kind of like it that way — it lets me know that he’s still there and it keeps me grounded.”

While Heyward is aware that the new contract takes him into his mid-30s, he believes he's fresher than his resume suggests. The nine-year veteran spent a significant portion of his first two seasons as a backup to Brett Keisel.

“I think Brett always told me, 'You’re going to keep getting better. You haven’t hit your prime,'" Heyward said. "And I really took that to heart. I felt like there’s another gear for me to hit and you know, I’m entering my 30s, but shoot I was behind those guys for so long, I’ve got to play catch-up. So I kind of feel like I’m still in my late 20s.”

Heyward has certainly played like it over the past three seasons, when he's racked up 30 of his 54 sacks.

The team changed his position from defensive end to defensive tackle in 2018 — a move more semantic than anything else since Heyward slides up and down the front depending on the situation — and he has become the dominant presence the Steelers envisioned when they selected him with the 31st overall pick in 2011.

He's become just as vital in the locker room — where he has embraced being a captain — and in the community.

His foundation created The Heyward House in 2015, which focuses on helping various child-based causes throughout western Pennsylvania. That closeness is one of the reasons Heyward admits he tried to distance himself from his contract status as weeks went by and no progress appeared to be made.

It's also why he felt such a sense of relief when things were finally sorted out.

“To be in a city where I was born and I have family has meant a lot to me,” he said. “But not only that it’s a city in which I am indebted to the community and it’s a city that I live playing for.”

Retaining Heyward gives one of the NFL's best defenses a sense of stability going forward. Outside linebacker Bud Dupree — who is playing on a one-year franchise tag this season — joked recently he turned down a two-year, $200 million deal so Heyward could get paid. Heyward hopes it's just the first of several moves by the team to lock up other high-profile players who helped the team lead the NFL in sacks and turnovers in 2019.

“Bud left it for me, so I am leaving it for TJ (Watt) and Minkah (Fitzpatrick),” Heyward said. “So it’s just getting passed on. I am pretty thankful in Bud taking the discount but there are a lot more guys to be paid, and rightfully so. I know everybody likes to make a big hoopla about today, but there is going to be more paydays down the road and my guys deserve it.”

Yet for all the zeroes at the end of his paycheck, Heyward is well aware of the responsibility that comes along with it. While he's been an integral part of the organization for nearly a decade, he's also never been to a Super Bowl. And he's well aware that is the ultimate standard by which he will be measured.

“I’m honored and humbled to get a new contract but at the end of the day, I understand the job is not done,” he said. "You know, the number is out there but it’s up for me to attain that.”