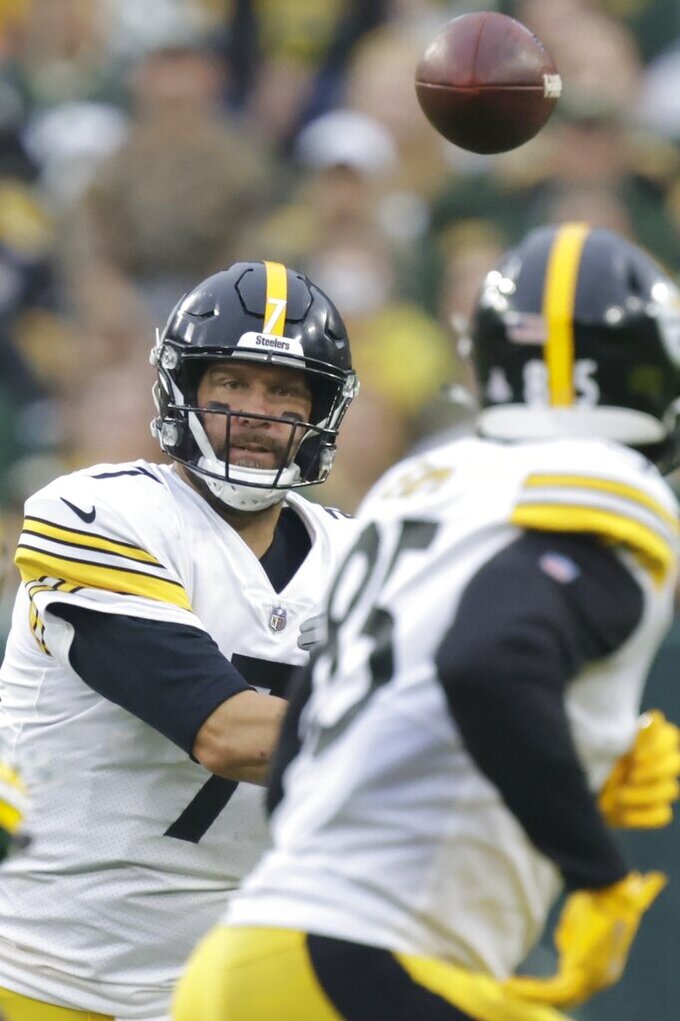 PITTSBURGH (AP) — Mike Tomlin admits Ben Roethlisberger can't move around and extend plays like he used to. The Pittsburgh Steelers coach doesn't believe that's reason enough to move on from his team's longtime quarterback during a 1-3 start.

Tomlin believes the accuracy issues that have plagued Roethlisberger over the opening month of the two-time Super Bowl winner's 18th season are “fixable” and has no plans to turn to backup Mason Rudolph.

“You know what he does and what he's done makes me really comfortable in saying that,” Tomlin said.

At least, when Roethlisberger is healthy. Something he's not at the moment. The 39-year-old is dealing with a hip issue that could limit his practice time ahead of Sunday's visit from Denver (3-1). This is the second time in three weeks Roethlisberger has been dinged up. He injured his left pectoral muscle during a loss to Las Vegas on Sept. 19, though he took every snap during a 24-10 setback at the hands of Cincinnati the following Sunday.

Tomlin said his concern for Roethlisberger's safety isn't “out of the ordinary" from what it has been in recent seasons and attributed some of the bumps and bruises as being a combination of Roethlisberger's age and playing from behind, a situation that forces the Steelers to pass and gives opponents more opportunities to take aim at his familiar No. 7.

“There’s collateral damage that’s associated with (playing from behind) for him and for us,” Tomlin said. “And I think we all understand that. I think that’s why it’s important that we continue to work to improve and have a well-rounded approach to play and get better in all areas.”

Pittsburgh's league-worst running game did show signs of life against the Packers. Rookie Najee Harris ran for 61 yards on 15 carries, easily his best total so far as a pro. Yet because the Steelers trailed by two scores or more for the majority of the second half, Roethlisberger ended up throwing it 40 times, completing 26 for 232 yards with a touchdown and a pick.

There were visible signs of the accuracy that's made Roethlisberger one of eight quarterbacks in NFL history to throw for 400 touchdowns. He found Diontae Johnson for a 45-yard score on Pittsburgh's opening possession and connected with James Washington for a 30-yard gain in the fourth quarter.

In between, however, there were the kind of misses that have cropped up with regularity over his past eight regular-season starts, a stretch in which the Steelers are just 2-6. A pair of deep looks to JuJu Smith-Schuster came up empty — with both receiver and quarterback trying to take the blame afterward — and a handful of times where Roethlisberger failed to recognize teammates running free in the secondary.

“I dropped my elbow down, and when you drop your elbow, the ball isn’t as accurate,” he said. "That’s just on me to make the better throws. We had some plays. We had some guys open on the sidelines early. I throw them a little faster than I want to at times. At the end of the day, you have to make the throws.”

Roethlisberger is completing 62% of his passes since Pittsburgh's franchise-record 11-0 run to start 2020 ended, with 12 touchdowns, eight interceptions and a pedestrian quarterback rating of 80.6, well below his career average of 93.7.

Tomlin understands mounting outside frustration with the team finding itself in the unusual position of last in the competitive AFC North. Both he and Roethlisberger understand negativity comes with the job when things aren't going well in a place where — for the better part of two decades — things have gone as well for any franchise in the NFL not named New England.

While Tomlin stressed he has plenty of confidence in Rudolph if for some reason Roethlisberger is unable to go at any point this season. Yet he's nowhere close to turning to Rudolph even if Roethlisberger isn't the play-extending master he once was.

“Ben used to be able to run really well when he was young, those days are behind him,” Tomlin said. “Other than that, I don’t see much that’s not a discussion in terms of technical alterations or quality of play that can be improved.”

NOTES: WR Chase Claypool (hamstring) and RT Chuks Okorafor (concussion) both have a chance to return to practice after sitting out last week. ... RT Zach Banner (knee) is nearing a return after being activated from injured reserve last week. ... The status of DB Cam Sutton (groin) and LG Kevin Dotson (hip) is uncertain.