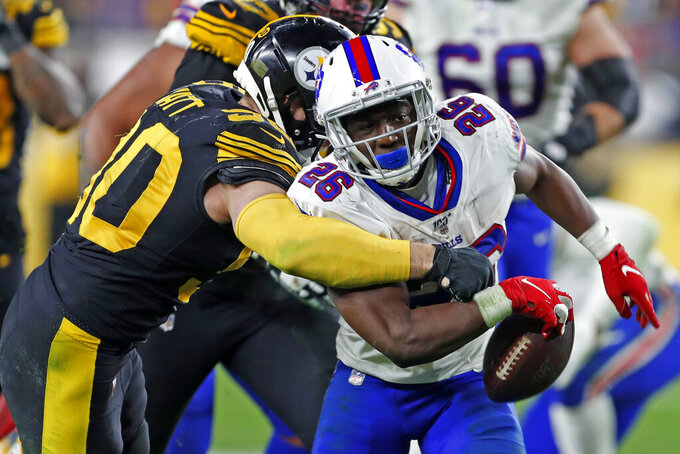 Pittsburgh Steelers outside linebacker T.J. Watt (90) strips the ball from Buffalo Bills running back Devin Singletary (26) and the Steelers recovered during the second half of an NFL football game in Pittsburgh, Sunday, Dec. 15, 2019. (AP Photo/Keith Srakocic)

Being on the short list of candidates for the NFL’s defensive player of the year award won’t earn T.J. Watt too many accolades at family gatherings.

“My brother,” Watt said, “will humble me really quickly.”

Watt’s older sibling, J.J., four years ago joined Lawrence Taylor as the only three-time winner of the award. T.J. Watt has a ways to go to catch big bro, but he is having a season to remember for a standout Pittsburgh Steelers defense.

The outside linebacker is fourth in the NFL in sacks (14), second in forced fumbles (seven) and fumble recoveries (four, tied), first in quarterback hits (33) and eighth in tackles for loss (14). He’s a top performer for a defense that ranks fourth in the league in yardage allowed.

On Thursday, Watt was named Steelers MVP in voting by his teammates. He is the first defensive player to be so honored since 2010, when Troy Polamalu claimed it. Polamalu also was named NFL defensive player of the year that season, and teammates began campaigning for the three-year veteran Watt to match that feat.

“Watching him play, watching him practice, watching the way he goes about his business,” veteran cornerback Joe Haden said, “I don't think I've ever seen someone more deserving.”

Watt has six forced fumbles and 10 sacks over his past nine games, the primary catalyst of a Steelers defense that has singlehandedly kept the team in postseason contention. That Pittsburgh can still make the playoffs heading into the season’s final week is remarkable considering its offense has scored exactly one touchdown in eight of its past nine games and ranks 30th in the NFL overall.

“I don’t like to be singled out on this defense,” Watt said in accepting the team MVP award, “because there’s so many other guys you can single out. You look across the starting defense and even the guys that fill in behind us, there’s so many playmakers and so many guys who don’t necessarily get the recognition, but if you turn on the film and you watch the amount of double-teams they take and the guys they take away in the passing game, it’s remarkable how we are working together as a unit.”

Only two of the Steelers’ past eight opponents have scored more than 17 points (none has topped 24). The Steelers haven’t allowed more than 300 yards of offense since Nov. 10.

“What T.J. does well, as good as anybody does, he prepares himself,” Steelers defensive coordinator Keith Butler said. “He works at preparing himself. He's out here first every day. You come out and look at the field and you'll see him out there playing football with the ball, like a little kid. He loves it. He loves the game, so he works at it.”

Watt used to root for the Houston Texans, for whom his brother J.J. has starred for the past 10 seasons. Although J.J. Watt remains on injured reserve — he returned to practice this week — his little brother could use a favor this week: To make the playoffs, the Steelers need the Texans to beat the Tennessee Titans on Sunday.

“I don’t think he will be playing,” T.J. said of J.J., “but I was a Texans fan growing up for eight years, so I’ll be a Texans fan again this Sunday.”