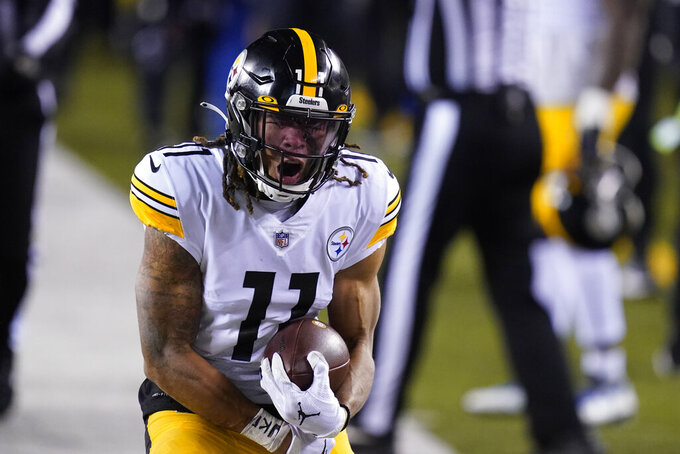 Pittsburgh Steelers' Chase Claypool (11) reacts after a reception during the second half of an NFL football game against the Cincinnati Bengals, Monday, Dec. 21, 2020, in Cincinnati. (AP Photo/Bryan Woolston)

PITTSBURGH (AP) — The initial splash Chase Claypool made quickly turned into a tidal wave, one opposing defenses could no longer ignore.

Scoring four touchdowns in your fourth game in the NFL has a tendency to do that.

Yet the Pittsburgh Steelers rookie wide receiver has tried to stay the course even though his torrid start — his 10 touchdowns through 10 games tied for the second-highest total by a rookie over that span in league history — has cooled off recently. If anything, he sees his recent dip as a compliment of sorts.

“I think it’s nice that teams respect you and put a safety over the top,” Claypool said on Wednesday after winning the team's Rookie of the Year Award.

The second-round pick's candidacy for the NFL's Rookie of the Year honor has ebbed thanks to adjustments by opponents and Pittsburgh's own offensive struggles. Claypool is averaging just 11.8 yards per catch and hasn't scored since getting his 10th touchdown in a victory over Jacksonville on Nov. 22.

Coach Mike Tomlin made it a point to try and manage Claypool's snap count as November bled into December in an effort to protect him from hitting the rookie “wall.” The decision was unilateral. Tomlin never talked to Claypool about it and the humble 22-year-old from Abbotsford, British Columbia — about an hour east of Vancouver — knew better than to bring it up.

“Coach T has been in this game for a lot longer time than I have,” Claypool said. “Whether I believe (in the rookie wall) or not, I think he knows what he’s doing. I’m feeling good now. What he did, whether it was necessary or not, I feel good heading into the playoffs.”

Claypool looked fresh during Pittsburgh's AFC North-clinching victory over Indianapolis last Sunday. Playing 54 snaps — his highest total since Nov. 8 — he caught four passes for 54 yards, including a leaping 34-yard grab in the third quarter that forced the Colts' safeties to back off the line of scrimmage and give the Steelers' sputtering offense some life.

The goal now for both Claypool and the Steelers (12-3) is to prove Sunday's second half wasn't simply the last flickering embers of Pittsburgh's occasionally torrid 11-0 start. Teammate JuJu Smith-Schuster — who made a similar impact during his first season in 2017 — didn't feel Claypool's production dip had anything to do with tired legs.

“I know he has not hit the rookie wall yet just because I’ve been there and I’ve felt that before,” Smith-Schuster said. “We have so many options on our offense, it’s hard to not pick one.”

Maybe, but the Steelers are at their most dynamic when the 6-foot-4, 238-pound Claypool is running downfield with an undersized defensive back in tow.

Even when he's not able to bring the ball in, he can force cornerbacks to illegally push and tug at him in an effort to slow him down. Claypool has drawn more yards in defensive pass-interference penalties than any other player in the league.

It's also one of the reasons quarterback Ben Roethlisberger has so much confidence in a player less than five years removed from playing high school football in Western Canada.

“I always tell him I think he can be as good as he wants to be,” Roethlisberger said. “I think only the surface has been scratched with the talent, with the ability of that guy. I’m excited to see what hopefully he can bring in the postseason. It’s always hard for young guys to play for such a long season.”

Maybe not that hard. Even while his offensive snaps decreased, he remained a constant on kick coverage units. Asked if Tomlin has approached him about possibly “graduating” off special teams because of his importance to the offense, Claypool said no. Frankly, it's a responsibility he's not in a hurry to relinquish.

“It’s something I need to do, especially as a rookie, especially as more people go down (to injury),” he said. “I’m not looking forward to getting off special teams.”

Claypool and his 772 yards receiving have a chance to move up the team's all-time rookie ranks during Sunday's regular-season finale against Cleveland (10-5). He's already racked up the fifth most ever and can pass former stars Santonio Holmes and Louis Lipps with a solid performance against the Browns.

The all-time leader in that category is Smith-Schuster, who piled up 917 yards as a 20-year-old in 2017. Smith-Schuster, still just 24, has become a mentor to Claypool. They talk about how to take care of their bodies during the offseason and how to build their personal “brand” while they're at it. Part of the trick is navigating the pitfalls that come with a higher profile. It's a journey Claypool believes he can handle.

“I didn’t need to worry about the quick start getting to me,” Claypool said. "I don’t want it to change me. I don’t think it has.”