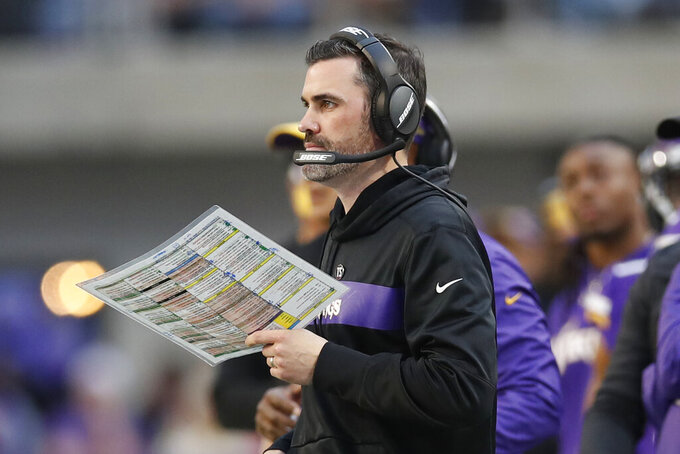 FILE - In this Dec. 16, 2018, file photo, Minnesota Vikings interim offensive coordinator Kevin Stefanski watches from the sideline during the first half of an NFL football game against the Miami Dolphins, in Minneapolis. It's Kevin Stefanski's turn to try and fix the broken Browns. The Vikings offensive coordinator was officially hired by Cleveland on Monday, Jan. 13, 2020, as the 18th full-time coach in franchise history and 10th since the Browns' expansion return, which to this point has been a resounding two-decade debacle. (AP Photo/Jeff Haynes, File)

CLEVELAND (AP) — Kevin Stefanski is getting a turn at fixing the busted Browns.

The Vikings offensive coordinator was officially hired by Cleveland on Monday as the 18th full-time coach in franchise history and 10th since the Browns' 1999 expansion return, which to this point has been a resounding two-decade debacle.

The 37-year-old Stefanski, who spent 14 seasons as an assistant in Minnesota and has never been a head coach at any level, signed a five-year contract. Financial terms were not immediately available. Stefanski will be introduced at a news conference Tuesday at FirstEnergy Stadium.

Parading out a new coach is an annual or semi-annual exercise with the Browns, who haven't been to the playoffs since 2002 and have been in a perpetual search for a coach to help restore their damaged image. Owners Dee and Jimmy Haslam have hired five coaches, and the Browns are 33-94-1 since since they agreed to buy the team before the 2012 season.

Stefanski accepted contract terms and agreed to accept the Cleveland job on Sunday, a day after the Vikings' season ended with a 27-10 playoff loss to the San Francisco 49ers.

“We were looking for a strong leader of this football team, a very bright coach with a high football IQ, who could establish a strong understanding of what he expected of his players, hold them accountable and confidently navigate the challenges and opportunities that present themselves throughout a season,” the Haslams said in a statement. “Kevin exemplifies these qualities and more.

“He has a tremendous ability to relate well and communicate well with his players, has experienced many coaching facets of a team, and understands how to put them in the best position to succeed while also establishing a winning culture.”

The Browns spent two weeks talking to candidates and chose Stefanski out of a group of eight, including Patriots offensive coordinator Josh McDaniels, who's been part of six Super Bowl-winning staffs.

Although Stefanski lacked head coaching experience, the Browns were impressed with him when he interviewed a year ago. But Cleveland instead hired Freddie Kitchens, who was overmatched in his first season and was fired after going 6-10 with a roster ripe with talent.

Stefanski appealed to the Browns in part because of his ability to adapt. He has worked under three head coaches with the Vikings since 2006. He also had success in developing quarterback Kirk Cousins over the past two years, and the Browns are counting on him to help Baker Mayfield, who had a disappointing second season.

Mayfield's statistics were worse across the board as his touchdown passes dropped from 27 to 22; he threw 21 interceptions compared to 14 in 2018 and his completing percentage dropped from 63.8 to 59.4.

"It's very exciting obviously for me and my family,” Stefanski said. “We're really looking forward to moving out here and getting situated in Cleveland and the adventure of it all. From my professional level, I just could not be more eager to get to work with this group. I think we have some really good players here.

“I think we have some outstanding people in this building. I know we have to add a GM and add some more pieces to this puzzle. I think the eager part for me is to get to work, buckle down and start to put together a program.”

Stefanski is in the early stages of assembling his staff and he could bring some colleagues over from Minnesota to be his coordinators. Offensive coordinator Todd Monken is not expected to be retained by the Browns and it's not clear yet about Cleveland defensive coordinator Steve Wilks.

Stefanski is expected to retain specials teams coordinator Mike Priefer, who improved the team's punting, kicking and coverage units dramatically in one season. He and Stefanski worked together from 2011-18 with the Vikings.

With Stefanski signed, the Browns have switched their focus to finding a new general manager after John Dorsey was surprisingly ousted following the season.

Eagles vice president Andrew Berry, who previously worked in Cleveland's front office, is scheduled to interview for the GM opening later this week. Berry was part of a front office with the Browns that oversaw teams that went 1-15 and 0-16 in consecutive seasons.

The team has also requested permission to interview Vikings assistant GM George Paton, a person familiar with the team's plans told the Associated Press. If their request is granted, the Browns will speak to him in the next few days, said the person who spoke on condition of anonymity because the team is not making its plans public.

Stefanski worked with Paton for the last 13 years in Minnesota.

Jimmy Haslam recently stressed the importance of a strong alignment between his coach and GM going forward, and Berry's familiarity with Cleveland's roster as well as his connection with chief strategy officer Paul DePodesta would seem to make him a good fit.