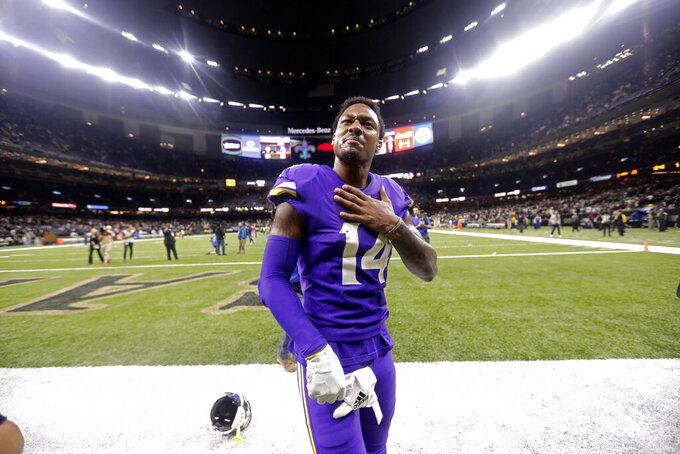 BUFFALO, N.Y. (AP) — Frustrated by the Bills collapse in an AFC wild-card playoff loss at Houston, general manager Brandon Beane opened the offseason suggesting Buffalo wasn’t one player away from being a better team.

Beane backed up that sentiment by making a series of additions – highlighted by agreeing to acquire receiver Stefon Diggs in a trade with Minnesota – in leading up to the start of the NFL’s signing period Wednesday.

League rules prevented teams from announcing the acquisition of players who have not taken a physical. And players are currently barred from visiting team facilities until March 31 as a result of the new coronavirus.

That didn’t stop the Bills from posting previous media reports of the team’s acquisitions on their website.

Diggs was the key addition in a trade in which Buffalo gave up four draft picks, including its first-round selection (22nd overall) this year.

The dynamic fifth-year receiver provides the Josh Allen-led offense a primary deep threat it has been previously missing, and joins a group of established receivers rounded out by Cole Beasley and John Brown.

With a projected $75 million in salary cap space entering the new NFL year, Beane didn’t stop there in shoring up various needs on a defense that allowed the third-fewest yards in the NFL last season, and fewest in 2018.

The additions free Beane to target the best talent over positional need in using Buffalo’s seven remaining picks in the draft next month. The Bills currently open the draft with the 54th selection.

Among Buffalo’s more pressing needs is at running back to complement Devin Singletary, who took over the starting job in his rookie season last year.

Before acquiring Diggs, Buffalo was expected to use one of its first two draft picks on selecting a receiver out of what is projected to be a deep pool of prospects.

Rather than hope for a prospect to develop, Beane took the calculated risk of acquiring a ready-made talent in Diggs, who is entering his sixth NFL season.

The 26-year-old has topped 1,000 yards receiving each of his past two years, and ranked fourth in the NFL last season in averaging 17.9 yards per catch.

Overall, Diggs has 365 catches for 4,623 yards and 30 touchdowns, providing the Bills with three receivers with 28 or more TDs. Previously, only seven players have scored 28 or more touchdowns receiving in team history.

Diggs joins an offense that ranked 26th in the NFL in yards passing, and scored 21 or more points just six times.

Allen’s inconsistency was particularly apparent in a 22-19 overtime playoff loss to Houston, in which the Bills squandered a 16-0 third-quarter lead. Allen finished completing 11 of his final 26 passes for 133 yards with a lost fumble.

Allen displayed his excitement in welcoming the receiver Monday by posting on a note on his Twitter account which read: “Ya Digg?”

Diggs responded by writing: “LETS GET IT.”

He has four years and approximately $47.5 million remaining on his current contract.

The one question is whether Diggs can keep his frustrations in check under a coach in Sean McDermott who demands players adhere to a team-first mentality.

In Minnesota, Diggs more than once stormed around the sideline after a failed offensive possession. He also grew impatient over his role in an offense that also relied on receiver Adam Thielen and running back Dalvin Cook.

After a dispiriting defeat at Chicago in 2019 that left the Vikings at 2-2, Diggs skipped two days of team activities out of frustration and drew more than $200,000 in fines.

Upon returning, however, he produced some of the finest performances of his career and helped the Vikings return to the playoffs and win at New Orleans in the wild-card round.

A common denominator involving many of Buffalo’s other additions are players' connections to Carolina, where McDermott previously served as the Panthers defensive coordinator.

Addison, who has topped nine sacks in each of his past four seasons, Klein and Butler all played under McDermott. They are also familiar with Beane, who worked in the Panthers' front office before taking over in Buffalo in 2017.

The Bills did announce signing cornerback Josh Norman to a one-year contract, who spent his first four NFL seasons in Carolina.