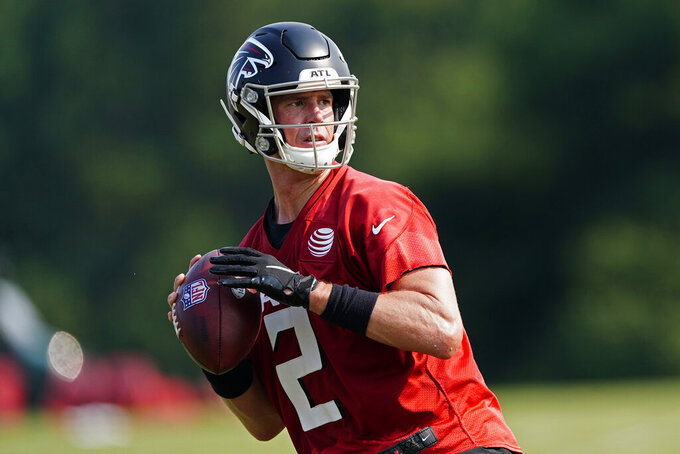 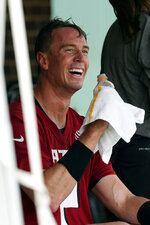 FLOWERY BRANCH, Ga. (AP) — Matt Ryan feels like the last man standing with the Atlanta Falcons, not that it’s a bad thing.

Ryan has nobody left from his rookie year of 2008 still with the team. And he’s one of just four starters — Jake Matthews, Deion Jones and Grady Jarrett are the others — left from the Super Bowl team of 2016.

But as much as he misses departed teammates like star receiver Julio Jones, the 36-year-old quarterback takes pride in working with younger players who he says push him to get better.

“It’s part of it,” Ryan said Saturday. “That’s the nature of this league. Rosters turn over quickly, and it’s about getting the guys that you come in with during the offseason and work with during training camp to come together as quickly as possible. It’s a little bit different than it was earlier in my career. You had teams that stayed together maybe a little bit longer.

“And now I think the turnover is more now. For me, I feel fortunate to go through these changes, to have been around long enough to go through some of these changes. I take pride that I’ve been able to play at a level that allows me to do that.”

“He’s probably impacted my career more than anybody I’ve played with, so I love him,” Ryan said. “I wish him the best moving forward. I know he wanted to move on, and I hope he has a lot of success in Tennessee because he’s a good friend. At the same time, you’ve got to keep moving forward.”

One twist in Ryan’s offseason regimen: adding speed to his game. New coach Arthur Smith wants him outside the pocket occasionally, running bootlegs. Ryan never considered himself the most athletic guy on the field.

“It’s just getting in with our guys in the weight room and constantly trying to improve to get faster,” he said with a smile. “I’m trying. I’m doing my best.”

He’s also growing accustomed to taking a lap when the offense makes a mistake and Smith sends the entire unit out to run. It happened again Saturday.

“We screwed up, man — all 11 of us,” Ryan said. “Art was not pleased with that and sent us on our way. Hopefully it’s something we learn from and it doesn’t happen again.”

Smith and new general manager Terry Fontenot have gone to great lengths to say the Falcons, who haven’t had a winning season since 2017 and went 4-12 last year, aren’t officially rebuilding because they held onto Ryan and didn’t draft his heir apparent. That was probably the best move considering that Ryan led the NFL last year in passing attempts and completions, throwing for 4,581 yards, 26 touchdowns and 11 interceptions.

So instead of choosing a quarterback with the No. 4 overall pick, the Falcons took tight end Kyle Pitts out of Florida to complement Ryan and the offense.

“It was pretty quick,” Smith said of his early assessment of Ryan last winter. “We reached out to him. We had a lot of mutual friends, guys who had coached him and played with him, so it was pretty early on.”

“This is when the relationship really comes together in the preseason as the days start adding up,” Smith said. “He’s been great. It’s so much fun working with Matt."

Smith will call plays this season as Ryan works in his fifth different scheme. He started out as a rookie with Mike Mularkey, then had Dirk Koetter, Kyle Shanahan, Steve Sarkisian and Koetter again.

“I’m proving something to everyone, myself included, every day,” Ryan said. “We talk about it all the time. The lockers that we have, they’re not owned, they’re rented and you’ve got to pay rent every day. You’ve got to go out there, put in the work and make sure they’re not putting a different name plate over the top of it."

Notes: TE Lee Smith is off the reserve/COVID-19 list and has resumed practicing. ... Rookie LT Jalen Mayfield, a third-round pick out of Michigan, is taking all the reps with the first-team offense as Kaleb McGary (undisclosed injury) and Matt Gono (neck) remain on the physically unable to perform list. ... Veteran LG Josh Andrews is trying to hold off rookie Drew Dalman, a fourth-round pick from Stanford. Dalman is also battling C Matt Hennessy for a starting job.