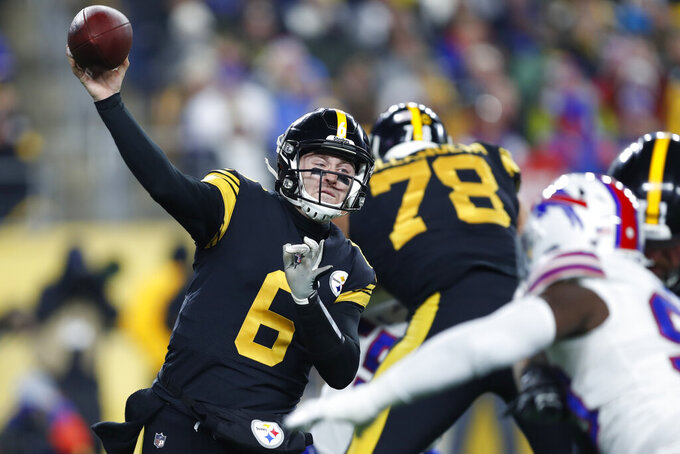 Pittsburgh Steelers quarterback Devlin Hodges (6) throws a pass during the first half of an NFL football game against the Buffalo Bills in Pittsburgh, Sunday, Dec. 15, 2019. (AP Photo/Keith Srakocic)

PITTSBURGH (AP) — Every Tuesday since he took over as Pittsburgh's starting quarterback last month, Devlin Hodges hasn’t known whether he did well enough to hold onto the job.

So yeah, he was a little anxious after throwing four interceptions in a loss Sunday to the Buffalo Bills.

The message from coach Mike Tomlin this week, however, was the same as it's been since Hodges replaced Mason Rudolph.

Something Hodges is only too happy to do heading into a visit to the New York Jets (5-9) on Sunday that could go a long way toward determining whether the Steelers (8-6) will make the playoffs. While he took full responsibility for his sloppy play against the Bills, it has done little to shake the confidence of the undrafted rookie free agent who is 3-1 as a starter.

“I am not going to change who I am,” Hodges said Wednesday. “I had a bad game — I know I had a bad game. But hey, I am getting better from it. Bad games do happen, and I am looking forward to coming out there and showing that we got better and we are going to have more fun and play football and hopefully get a win.”

The Steelers likely need one if they are going to reach the postseason, remarkable considering they started 1-4 while losing franchise quarterback Ben Roethlisberger in Week 2 to a right elbow injury. The Steelers will earn the AFC’s No. 6 seed in the playoffs if they win their final two games; they can qualify even if they lose to the Jets or in Week 17 at the Baltimore Ravens if the Houston Texans beat the Tennessee Titans next week.

And if the Steelers do make the playoffs, it will be “Duck Mania” remembered for getting them there. Dubbed “Duck” because of his elite-level duck-calling skills, Hodges had a 103.2 passer rating and completed 71.3% of his passes through his first five NFL appearances.

But Hodges fell flat against the playoff-bound Bills and their NFL No. 3-ranked defense (43.9 rating). Afterward, Tomlin declined to name Hodges the starter for the Jets game. Two days of speculation ensued in which it was thought Tomlin might go back to Mason Rudolph at quarterback.

A day after he learned he was keeping his job, Hodges was back leading the offense at practice.

“He was ready to go today,” receiver James Washington said. “He looked like he was happy to be here, and that's what we're looking for. As long as he's feeling good and confident, we are, too.”

In announcing his decision to stick with Hodges this week, Tomlin referenced his decision five weeks before that when he stuck with Rudolph after a similar situation (four interceptions in a loss to Cleveland). Tomlin said he prefers to give his players a chance to respond from adversity.

It doesn’t sound as if for Hodges that confidence will be an issue even one of his worst games he’s played, regardless of level.

“I have always been able to just put it in the past and move on,” Hodges said, “because (bad games) happen. I hate that they happen, but you’ve got to let it go, get better and focus on the next week.”