The story of the NFL draft, from extravaganza to unadorned 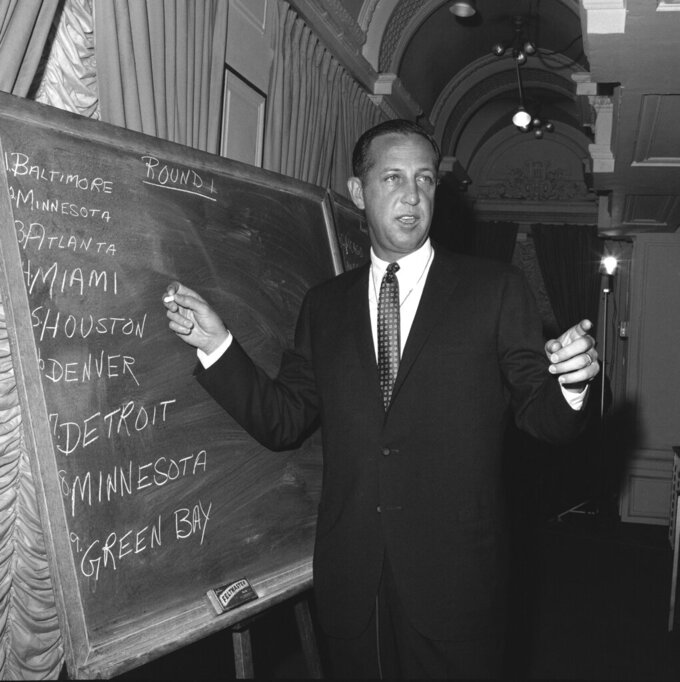 An NFL draft handled remotely because of the coronavirus pandemic is the latest twist to an event that has become as popular as any pro football happening short of the Super Bowl.

Roger Goodell alerted NFL teams in a memo Thursday night that the dates of this year’s draft would remain April 23-25. The eight owners who comprise the NFL Management Council Executive Committee unanimously endorsed moving forward as planned. There has been chatter from some general managers about wanting it pushed back, and Goodell threatened disciplinary action against any teams publicly criticizing the decision.

So next month's draft, originally set for Las Vegas, will have a pretty much unadorned look. And with club facilities shut at least through April 8 and likely for much longer, Goodell told the teams: “All clubs should now be doing the necessary planning to conduct draft operations in a location outside of your facility, with a limited number of people present, and with sufficient technology resources to allow you to communicate internally, with other clubs, and with draft headquarters.

“Needless to say,” he added, "we will be prepared to adjust to changed circumstances in the next several weeks, including the prospect of clubs being able to resume even limited operations within their facilities.”

The draft will be televised and, given the scarcity of sports offerings, the ratings for this "selection meeting" could be impressive.

As is the history of the draft.

It began because Bert Bell had been burned and sought a way to get even. His creation, the NFL draft, has become an industry unto itself.

Bell owned the Philadelphia Eagles in 1933 and was hot to sign Stanley "King Kong" Kostka of the Minnesota Gophers. All collegians were free agents back then — college football was far more popular than the pros — and Bell saw the bruising fullback/linebacker as a building block for his team.

But Kostka signed with the Brooklyn Dodgers; yes, that was a football franchise back then. Never mind that Kostka lasted one season in the NFL. Bell had a calling.

"I made up my mind that this league would never survive unless we had some system whereby each team had an even chance to bid for talent against each other," he later told The Associated Press.

With some negotiating and arm-twisting — Bell was so good at that he soon would become NFL commissioner — he persuaded owners of the other eight clubs to try a draft. The team with the league's worst record would pick first and the rest would go in reverse order of their success in the standings.

On Feb 8-9, 1936, in a Philadelphia hotel owned by the Bell family, the draft was born. And guess who had the first selection: the 2-9 Eagles.

That they took halfback Jay Berwanger, the first Heisman Trophy winner, who played at Chicago University — yes, that was a college team back then — and couldn't sign him was somewhat embarrassing; Berwanger chose to go into the "real world" where he could earn more money than the Eagles were offering.

Regardless, the draft was established, with nine rounds, increased to 10 the next year and to 20 in 1939, with this oddity in 1938 and '39: Only the five teams with the worst winning percentage in the previous season made selections in the second and fourth rounds.

The number of rounds fluctuated through the years, in part because of competition from the All-America Football Conference in the 1940s, but also because college football grew and more players were available. For a span of a dozen drafts, there even was a bonus pick to start proceedings, with one team each year getting it until every team had gotten one.

When the AFL began in 1960 and soon started pirating NFL players and hiding college seniors, the NFL moved its draft up from the spring. Cloak-and-dagger stories developed, as soon-to-be Pro Football Hall of Famer Gil Brandt told Ken Rappoport and Barry Wilner for the book "On The Clock, The Story of the NFL Draft."

"Our battle for players with the AFL featured the so-called baby sitters who would hide players so the other league couldn't find them," said Brandt, who scouted the colleges for the Dallas Cowboys for three decades, drafting the likes of Roger Staubach, Bob Lilly and Tony Dorsett, and now is the lead draft consultant to the NFL. "There was a group of people, ex-coaches, ex-players, even the governor of Oregon, who were involved."

The merger led to a common draft, but the grab bag for talent wasn't a big deal whether staged in Philly, New York, Washington, Pittsburgh, Milwaukee, Los Angeles or Chicago. Then television stepped up.

Desperate for programming, ESPN hired Bill Fitts, who had worked games on CBS and NBC, as producer of the draft show, which Fitts admitted in "On The Clock" was rudimentary.

"I would say at the beginning it was like with our golf coverage — we started covering one hole," Fitts said with a laugh. "Look what it went to."

Yes, the extravaganza elements will not be present next month. But it's not an exaggeration to say the draft has exploded beyond the selection meeting tag the league hung on it. And don't underestimate the credit TV deserves, first with ESPN's gavel-to-gavel coverage and then with NFL Network joining in since 2006. Plus a move to prime time for Thursday's first round in 2010, and to the early evening for Rounds 2-3 on Friday.

Would Mel Kiper Jr., Todd McShay and Mike Mayock have become household names to draftniks? Would there even be draftniks? Would mock drafts begin appearing as soon as college underclassmen declared for the pros in January; in 1990, the NFL began allowing collegians whose class had been in school for three years to apply for the draft.

Just as television has been a powerful force in the popularization of pro football, it has been irreplaceable in the universalizing of the draft.

When the league moved the proceedings to Radio City Music Hall, where it held nine drafts, it also turned the fans loose in the art-deco landmark. That meant several thousand folks dressed in jerseys from all 32 teams howling and screaming — and often booing — the selections.

That made for great TV, naturally. And it gave the draft an entertainment element it never had, with red carpets to follow.

Those fans would follow the draft when the NFL turned it into a road show. In 2014, Radio City, owned by Madison Square Garden, had scheduled a spring spectacular for the usual draft dates in late April. The league had to move the draft back into May, only to see the Radio City show switched to 2015.

Annoyed by the Garden's machinations, and intrigued by the possibilities of moving around its biggest offseason event, the NFL abandoned the Big Apple for the Windy City. After two highly successful years in Chicago in which the league used iconic local settings and fan festivals to boost the draft's profile and the size of the crowds, it headed to Philadelphia — the original site back in Bert Bell's days.

There, using the Philadelphia Museum of Art, with the "Rocky" statue and all, as a backdrop, the NFL saw an astounding 250,000 attend over three days.

In 2018, a stadium was the site for the first time, at AT&T Stadium, Jerry's Palace near Dallas. And then the draft headed to Music City, alongside the honky tonks on Broadway in Nashville — and was, by far, the biggest smash hit in its history.

Las Vegas won't have its chance this spring, and 2021 is reserved for Cleveland. The Vegas Strip might get a shot again in 2022, which is unspoken for.

Regardless, and even in these stressful times when it wisely has been scaled back as a safeguard, the NFL draft is a major event.

What would Bert Bell think?