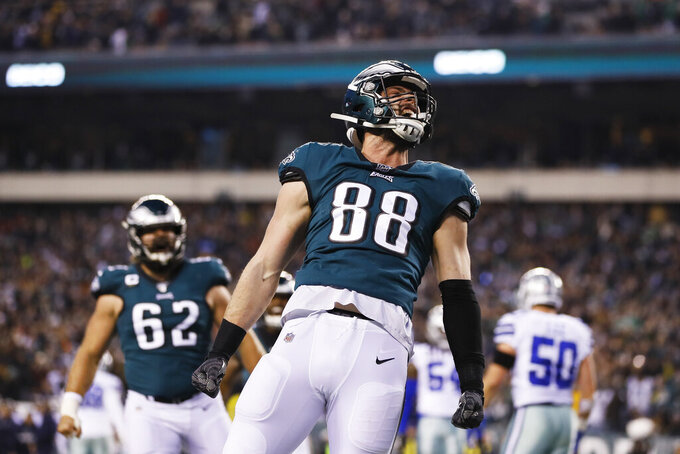 Philadelphia Eagles' Dallas Goedert celebrates after scoring a touchdown during the first half of an NFL football game against the Dallas Cowboys Sunday, Dec. 22, 2019, in Philadelphia. (AP Photo/Michael Perez)

PHILADELPHIA (AP) — Carson Wentz brought the Eagles from the brink of playoff extinction to the cusp of the NFC East championship. All they need to do is beat the New York Giants in the finale, and a team that was 5-7 can prep for a wild-card game at the Linc.

Yes, that Wentz has orchestrated the comeback hasn't been a total surprise, even with his critics shouting (or typing) that they want more out of the franchise QB. Wentz was 13 for 15 for 163 yards, one touchdown and no interceptions (134.2 passer rating) on Philadelphia's three scoring drives in a 17-9 win over the Dallas Cowboys. The Cowboys would have clinched the division with a win. Instead, the Eagles are in control.

"We've got a lot on the line," Eagles coach Doug Pederson said Monday. "What we've done to this point, yeah, it matters. But it's about going 1-0 this week."

But what has been a stunner is the help Wentz had along the way in a three-game winning streak that thrust the Eagles back in the playoff picture. The loss of star power hasn't dimmed their outlook down the stretch. How about former college quarterback Greg Ward? He caught the winning touchdown pass against the Redskins. He had four catches for 71 yards against the Cowboys, pushing his totals to 22 catches for 221 yards and a TD over the past five games. Boston Scott joined Ward from the practice squad to become major contributors, and totaled 156 all-purpose yards and a rushing touchdown earlier this month in a win against the Giants.

"They're just so eager and energetic to be out there and play," Pederson said. "I think from a game plan perspective, we try and keep it as simple as we can."

The Eagles have promoted defensive end Joshua Perkins and wide receiver Robert Davis off the practice squad to fill the gaps caused by injury, not exactly the type of transactions contending teams usually make at this time of the season. Here they are, on the roster and ready to step up.

"These guys are busting their tails for Carson," Pederson.

In return, Wentz trusts the receivers enough to give them opportunities and make plays. It's impossible to count out the Eagles now, but the underdog mentality that fueled the run won't help them against the Giants. They opened as 4½-point favorites to knock off the Giants.

Under a revamped roster, the Eagles did wake up, and a playoff berth is within their grasp.

The Eagles' defense held Dallas without a touchdown and cornerback Sidney Jones saved the win when he broke up Dak Prescott's pass in the end zone to seal the win. Philadelphia's defense forced three-and-outs on each of Dallas' first two possessions, as well as on three of the Cowboys' first four offensive drives of the game. Should the Eagles return home for a playoff game, look out, the Eagles rank third in the NFL with 16.8 points allowed per game at home, which trails only New England (13.3) and Minnesota (14.2).

The Eagles played their most complete game of the season but depth at receiver and the secondary could be an issue if injuries continue to pile up.

Wentz is on the rise. The Daily News blasted "NICK WHO?" on Monday's back page with the subhead, "Wentz proves he can win a big game, too." Wentz has taken anonymous shots from inside the locker room the past two seasons, and watching former backup Nick Foles win a Super Bowl while he was sidelined with an injury led a minority of fans to turn on him.

But there's really no doubting him now, not after he was 31 for 40 for 319 yards and a touchdown and played turnover-free football. He led fourth-quarter comebacks the previous two weeks against the Giants and Redskins and was at his best Sunday in the most important game of his career. Wentz has a bigger one ahead Sunday, and he's ready -- over the past three games in the fourth quarter, Wentz is 34 for 42 for 352 yards, four touchdowns and no interceptions. Summed up, he's clutch.

The normally sure-footed Jake Elliott has become a bit unsure from long range of late. He missed field goals from 55 and 53 yards against the Cowboys. He missed a crucial 47-yarder in a win against the Giants and has to be on top of his game if he's needed late on Sunday.

The Eagles have gone deep on the roster because injuries keep piling up. It was no exception against the Cowboys. Ertz hurt his ribs and briefly left the game. Pederson said Monday he was waiting on tests to find out the full severity of Ertz's injury. Cornerbacks Ronald Darby and Jalen Mills both left with injuries, and so did wide receiver JJ Arcega-Whiteside. Pederson said Darby would miss some time with a hip injury.

4. Eagles have won three straight games, all against NFC East teams. The Cowboys have tried to give away the division and the Eagles have pounced. Make it four straight wins, and they'll host a playoff game.

Beat New York. The Eagles are 86-85-2 against the Giants and have won the past six games in the series. Wentz tossed a 2-yard touchdown pass to Ertz in overtime to give Philadelphia a 23-17 win on Dec. 10.