Struggling Saints look to get right versus skidding Jets 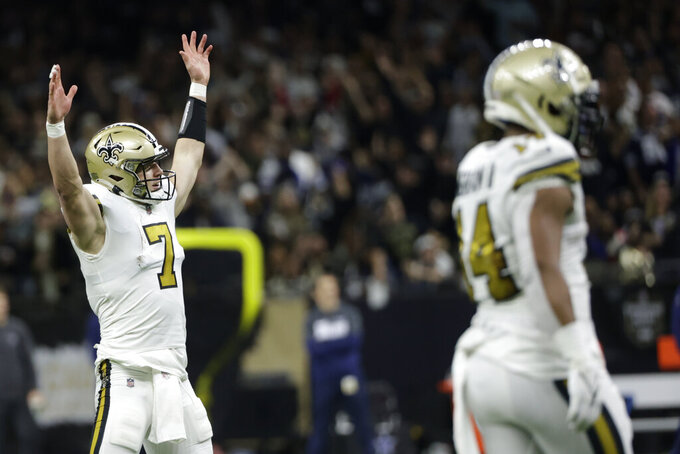 New Orleans Saints quarterback Taysom Hill (7) celebrates a touchdown against the Dallas Cowboys during the first half of an NFL football game, Thursday, Dec. 2, 2021, in New Orleans. (AP Photo/Derick Hingle)

BETTING LINE: Saints by 5 1/2, according to FanDuel SportsBook.

TURNOVER DIFFERENTIAL: Saints plus-1; Jets minus-16.

SAINTS PLAYER TO WATCH: RB Alvin Kamara fully practiced all week and is expected to return from a four-game absence caused by a sprained knee. He leads the Saints with 530 yards and three TDs rushing. He also leads the team with 32 catches and has 310 yards and four TD receptions.

JETS PLAYER TO WATCH: QB Zach Wilson had arguably his best performance last week against Philadelphia, going 23 of 38 for 226 yards and two touchdowns with an interception, and added a TD run. Coach Robert Saleh said Wilson was on his way to a huge performance, but the offense held the ball for only 70 seconds in the third quarter and was never able to get back into a groove.

KEY MATCHUP: The Jets' defensive front vs. the Saints' run game powered by Kamara and the read-option with QB Taysom Hill. New York has struggled mightily against run-heavy offenses.

KEY INJURIES: Hill is slated to start at QB for the second time this season for the Saints, despite dealing with an injured middle finger on his throwing hand. ... DE Cameron Jordan and RB Mark Ingram both were placed on the Saints’ COVID-19 reserve list this week. ... RT Ryan Ramczyk (knee) will miss his fourth straight game. ... LT Terron Armstead (knee) has missed three of the Saints’ past four games and was limited in practice this week. ... Rookie LB Peter Werner (elbow) is out after sitting out practice all week. ... LB Kaden Ellis will be sidelined a second straight week with a hamstring injury. ... Jets WR Corey Davis is out for the season with a groin injury. Meanwhile, WR Elijah Moore was placed on IR with a quadriceps injury that kept him out of practice all week. ... RB Tevin Coleman and CB Michael Carter II remained in the concussion protocol and won't play. ... WR Jeff Smith was placed on the COVID-19 list Friday.

SERIES NOTES: The Saints have won three of the last four meetings and six of the last eight. ... Two of the Saints’ 14 shutouts in franchise history have come against the Jets. ... Of the 13 meetings, eight have been decided by a touchdown or less. ... The Jets won the first matchup 18-17 in 1972 with Bobby Howfield accounting for all of New York's scoring with six field goals, a franchise record until 2018 when Jason Myers topped the mark with seven. ... In 1980, Tony Galbreath ran for two touchdowns in the fourth quarter, leading the Saints to their only victory of the season, 21-20. ... In 2001, New Orleans was driving for the tying score with less than two minutes left when New York safety Damien Robinson took down quarterback Aaron Brooks by his facemask. The penalty would've given the Saints a first-and-goal, but New Orleans offensive tackle Kyle Turley — angered by Robinson's facemask grab — jumped on the Jets defensive back to cause offsetting unnecessary roughness penalties. Then Turley ripped off Robinson's helmet and flung it, resulting in an unsportsmanlike penalty. The Saints were unable to score. ... In the teams' last meeting in 2017 at the Superdome, Elijah McGuire caught a pass from Bryce Petty late in the fourth quarter to get the Jets within five at 24-19. But Ingram ripped off a 50-yard touchdown run 18 seconds later to seal the win for New Orleans.

STATS AND STUFF: New Orleans is on its first five-game skid since the 2005 season, the year before Sean Payton was hired as Saints head coach. ... Payton is 2-1 vs. the Jets with both victories coming in New Orleans. ... Hill is one of three QBs, along with Chicago’s Justin Fields and Baltimore’s Lamar Jackson, with 100-plus yards rushing in a game this season. ... Hill has passed or rushed for at least two TDs in each of his first five starts for New Orleans, with the first four coming last season. ... Kamara needs one catch to pass Roger Craig (358) for the most by a running back in his first five NFL seasons. ... WR Marquez Callaway has five TD catches in his past five road games. ... WR Lil’Jordan Humphrey has a TD catch in two of his past three games. ... LB Demario Davis was a third-round draft pick of the Jets in 2012. He and Pittsburgh's T.J. Watt are the only players with 10-plus tackles for loss in each of the past five seasons. ... CB Marshon Lattimore had three passes defensed and his 12th career interception last week. He's the only player with at least 50 tackles and 10-plus passes defensed in each of past five seasons. Lattimore had an INT in the teams' last meeting in 2017. ... The Jets and Wilson had their best opening half of the season last Sunday, scoring three touchdowns, including a run by the QB. But New York was held scoreless in the second half with the defense unable to get off the field. ... K Alex Kessman missed his two extra-point attempts in his NFL debut and was replaced this week by Eddy Pineiro. ... WR Braxton Berrios ranks first in the NFL among players with 15 or more kickoff returns with a 28.9 average, helped by his 79-yard return on the opening kickoff last Sunday. He's also among the league leaders with a 13.6 average on punt runbacks. ... LB C.J. Mosley had 13 tackles last week, making him the sixth Jets player with at least six games of 10 or more tackles since 2000 and the first since David Harris in 2009. ... New York allowed 418 totals yards to Philadelphia, marking the sixth time this season the Jets have given up at least 400 in a game.

FANTASY TIP: Jamison Crowder is usually a high-volume receiver as a slot option for the Jets, but could see an increase in targets with Davis out and Moore uncertain. He enters second on the team with 42 receptions despite missing three games.