Study: 1-in-5 U.S. adults bet money on sports in past year 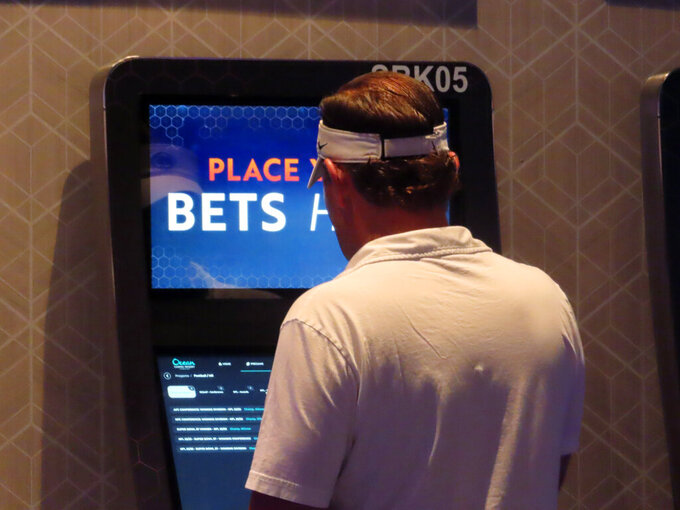 A customer makes a sports bet at the Ocean Casino Resort in Atlantic City, N.J. on Sept. 6, 2022. In the fifth year of legal sports betting in most U.S. states, the action is speeding up due to microbetting, the ability to place a bet on an outcome as narrowly targeted as the result of the next pitch in baseball or the next play in football. (AP Photo/Wayne Parry)

ATLANTIC CITY, N.J. (AP) — Nearly one in five U.S. adults bet money on sports over the past year, according to a survey released Wednesday.

The report from the Pew Research Center shows that 19% of adults surveyed said they had wagered on sports.

The most common way they did so was by placing bets with friends or family, such as a private betting pool, fantasy league or a casual bet; 15% of respondents said they bet in this manner.

Only 8% said they had made sports bets in person at a casino, racetrack or kiosk, and 6% reported having done so online. The survey did not ask if the online sites were regulated by a government agency, or were unregulated offshore sites.

The survey's results indicate that the nascent U.S. legal sports betting industry, while growing rapidly, has plenty of room for expansion; more than 80% of all legal sports bets in the U.S. are made online.

As of last Thursday's kickoff to the NFL season, 31 states plus Washington D.C. offered legal sports betting, and several others will do so soon.

A record 46.6 million Americans say they plan to bet on the current NFL season, up 3% from last year, according to the American Gaming Association, the gambling industry's national trade group.

The center surveyed 6,034 adults from July 5-17. Its margin of error is plus or minus 2 percentage points.

The Pew Center said 27% of Black respondents and 24% of the Hispanic respondents reported having bet on sports, while 18% of white adults and 10% of Asian-Americans said they had.

It found no significant differences in sports betting by educational attainment or household income level: 18% of college graduates said they bet on sports in the past year, and 20% of those without a college degree said they had done so.

Meanwhile, 22% of adults in the upper-income wage bracket, 19% of middle-income and 19% of lower-income households reported making sports bets in the past year.

Asked whether betting on sports is good for sports itself, 49% were neutral, 33% saw it as bad and 16% said it is good.

As of May, the fourth anniversary of a U.S. Supreme Court decision clearing the way for all 50 U.S. states to offer legal sports betting should they choose to do so, Americans had wagered over $125 billion on sports.