Super Bowl ads serve up politics - and an escape from it 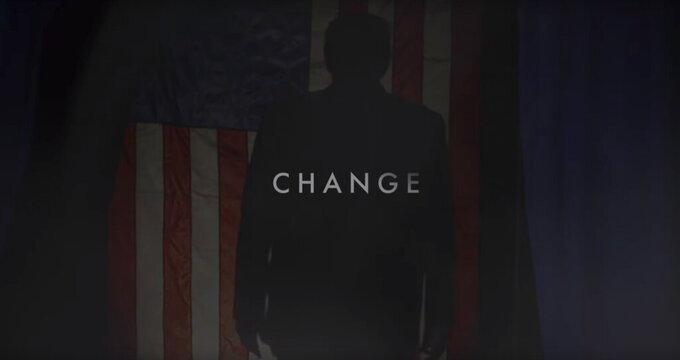 This undated image provided by President Donald Trump’s campaign shows a scene from the Trump's 2020 Super Bowl NFL football spot. This year for the first time, national politics will invade the game as presidential candidate Michael Bloomberg and President Trump have shelled out millions to broadcast campaign ads during advertising’s biggest night, when nearly 100 million viewers are expected to tune into Fox. (Donald J. Trump for President, Inc. via AP)

NEW YORK (AP) — Americans weary of a seemingly endless barrage of political news may be looking for a respite as they settle in to watch the Super Bowl on Sunday.

They won't get it, although the real-world interruption should at least be brief.

For what may be the first time, national politics will invade the one of the biggest TV events of the year. Democratic presidential candidate Michael Bloomberg and President Donald Trump have shelled out millions of dollars to broadcast campaign ads during the game, when nearly 100 million viewers are expected to tune into Fox.

The political intrusion may have been inevitable. Not only is the U.S. in the middle of a presidential impeachment trial, Super Bowl Sunday falls right before the Iowa caucuses on Monday and the State of the Union address by Trump on Tuesday.

In good news for the weary, however, those ads will likely be the exception of the night. Most brands are taking extra care to steer clear of politics, instead aligning themselves with celebrities, hit songs, and nostalgia to guarantee the widest appeal possible while avoiding potentially divisive territory.

“People are just fatigued with the polarization of society,” said Peter Daboll, CEO of Ace Metrix, which measures advertising effectiveness. “Advertisers are trying to take a little more centrist approach.”

WILL POLITICS STEAL THE SHOW?

Bloomberg released his ad on Thursday. It focuses on gun violence and portrays Bloomberg as someone willing to take on the gun lobby.

The Trump campaign released one of two 30-second ads that touts wage growth and lower unemployment rates. "The best is yet to come," Trump says in the ad.

The very presence of national campaign ads during the Super Bowl is unprecedented, said Charles Taylor, a marketing professor at Villanova University. January is usually too early for national politics, given that the presidential election isn't until November. But this year, “taking out a Super Bowl ad in this context can be viewed as a show of strength or signal of confidence,” he said.

Most marketers, however, are taking great pains to not allude to the current political climate. Amazon is one exception, although its spot only makes oblique references to national affairs. In it, Ellen DeGeneres and Portia de Rossi imagine life in different time periods before the Alexa voice assistant; in the ad, a newsboy says his newspaper has “fake news” and a Richard Nixon-like character asks his secretary to remind him to delete his tapes.

Those who avoid politics will likely fare better this year, said Kim Whitler, a professor at the University of Virginia’s Darden School of Business. “Gearing up for a national election, I think people are just exhausted from the heaviness of the news,” she said. “This is that moment of escape when people are looking to have a break from news.”

ALL THE STARS COME OUT

Brands are betting that seeing their favorite celebrities in ads will unite Americans this year. While celebrities are always a staple in Super Bowl ads, this year most advertisers seem to have shelled out for at least two stars if not four or five for their ad efforts.

Michelob Ultra has actor and wrestler John Cena coaching Jimmy Fallon as he tries to work out. TV host and cookbook author Chrissy Teigen and her husband, musician John Legend, define “young luxury” in an ad for Genesis, the luxury car brand spun off by Hyundai.

Mountain Dew remakes “The Shining” with Walter White himself — Bryan Cranston of “Breaking Bad" — chasing Tracee Ellis Ross of “Black-ish” around a deserted hotel, though only to hawk the new Mountain Dew Zero Sugar.

Audi, for instance, has “Game of Thrones” star Maisie Williams belt out “Let it Go” from the Disney hit “Frozen" as she navigates a steamy day and bumper-to-bumper traffic to promote Audi's e-tron electric vehicles.

Doritos uses MC Hammer’s 30-year-old classic “U Can’t Touch This” to market its new Cheetos Popcorn brand. And Pepsi highlights a black soda can with the Rolling Stones anthem “Paint it Black,” updated by performers Missy Elliott and H.E.R.

Lighthearted and even juvenile humor is also back in a big way.

In Little Caesar’s first Super Bowl ad, pandemonium reigns at the Sliced Bread headquarters run by “The Office” star Rainn Wilson after someone says Little Caesar’s pizza delivery is the best thing “since sliced bread.” An ad for Reese’s Take 5 candy bar uses visual gags for people who haven’t heard of the product. It shows office workers who are literally “under a rock,” “born yesterday,” “raised by wolves” and have their “head in the sand.” Cue groans here.