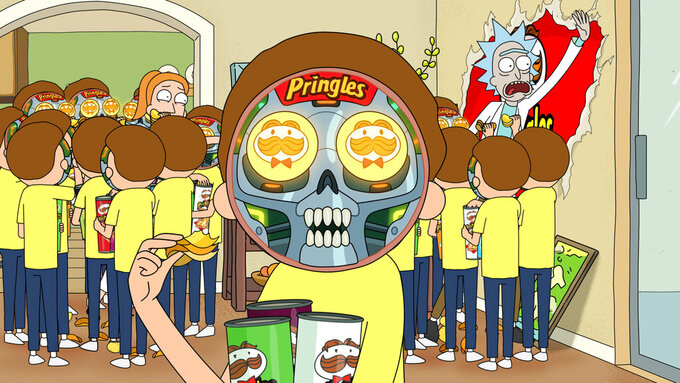 This undated file image provided by Pringles shows a scene from the company's 2020 Super Bowl NFL football spot which partners with the show "Rick and Morty." Pringle’s enlisted Adult Swim’s animated “Rick and Morty” duo with a meta ad in which the characters realize they’re stuck inside a Pringles commercial. (Pringles via AP, File)

Here's the latest on what's happening with ads during the Super Bowl. All times EST.

A tinge of weirdness crept into this year's barrage of humor and celebrities.

Quicken Loans Rocket Mortgage had an unsettling ad that showed “Aquaman” Jason Momoa, known for his buff physique, saying home is a place where he can “be himself,” as he strips off his muscles and hair to reveal his “true” physique: skinny and bald. TurboTax tried to tie doing taxes into a CGI-enhanced dance of wobbling knees to a bouncy song, “All People Are Tax People.”

Snickers imagined a world where people sing on a hilltop (an homage to a famous “Hilltop” Coke ad) about digging a giant hole and putting a giant Snickers in it because the “world is out of sorts.”

And Pringle’s enlisted Adult Swim’s animated “Rick and Morty” duo with a meta ad in which the characters realize they’re stuck inside a Pringles commercial.

Mr Peanut is back. Are you surprised?

In what could become a case study in the perils of Super Bowl marketing stunts, Planters teased its Super Bowl ad nearly two weeks before the game, releasing a teaser for its Super Bowl ad that showed its Mr. Peanut mascot seemingly being killed.

The "death" of Mr. Peanut went viral on Twitter. But when Kobe Bryant was killed in a helicopter crash, the marketing stunt suddenly seemed insensitive, so Planters paused its pre-game advertising.

The actual Super Bowl ad was relatively inoffensive, with a baby Mr. Peanut appearing at the funeral, but the pregame stunt is likely what people will remember.

"What's a Quibi?" Viewers might still be asking that after the company's Super Bowl ad, one of the first of the game.

The ad shows a bank heist going awry because the getaway driver is occupied; he says he’ll “be there in a Quibi.” That's a reference to the upcoming “snackable” video service, which plans to offer episodes of 10 minutes or less. The bank robbers stand around in front of the bank as sirens grow louder; one appears to start watching Quibi himself.

The service, due to launch in April, is heavy on big ideas and Hollywood muscle. But it’s a gamble, especially considering that several earlier efforts in mobile entertainment — most notably Verizon’s ill-fated Go90 service — fell flat.

It's not clear that Quibi intended the ad to suggest that its service will be so absorbing that watching it can get you in trouble. But it did make clear to viewers how to pronounce the name of the service — it's KWIH-bee.