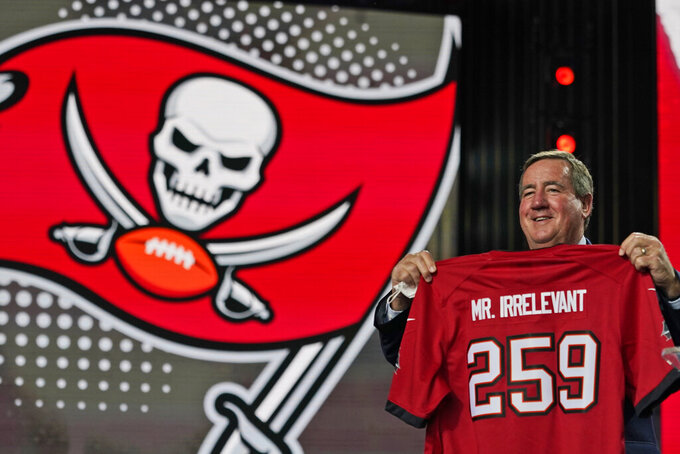 A Mr. Irrelevant jersey is held up during the seventh round of the NFL football draft, Saturday, May 1, 2021, in Cleveland. The final pick of the draft was Grant Stuard, a linebacker from Houston, chosen by the Tampa Bay Buccaneers. (AP Photo/Tony Dejak)

TAMPA, Fla. (AP) — Theoretically, the Tampa Bay Buccaneers could have opted out of the NFL draft and still felt good about their chances of repeating as Super Bowl champions.

With all 22 starters and every key reserve and specialist returning from last season, the Bucs truly addressed “wants” instead of needs with the addition of seven prospects led by an edge rusher and Tom Brady’s potential successor.

Brady turns 44 in August, signed a contract extension this offseason that’ll keep him with Tampa Bay until he’s at least 45, and is trying to become the first quarterback to lead a franchise to consecutive NFL titles since he did it with the 2003 and 2004 New England Patriots.

That’s why general manager Jason Licht pushed so hard to keep the core of the team together in free agency.

The Bucs feel Kyle Trask has a promising future, however he’s not a threat to push the seven-time Super Bowl champion out the door prematurely.

The second-round pick threw for 4,283 yards and a FBS-best 43 touchdowns in his final season at Florida and has a history going back to high school of patiently riding the bench while awaiting an opportunity to play.

Licht spoke with Brady before the draft about the possibility of Tampa Bay selecting a quarterback to groom as a potential successor.

“Tom’s the ultimate team guy, and I don’t think Tom’s worried about anybody taking his job. ... He was totally fine,’’ Licht said. “He understands. He wants what’s best for the team. Tom is gonna play as long as Tom wants to play. He’s earned that right.”

Linebacker Joe Tryon, an edge rusher who’ll get a chance to learn from Shaquil Barrett and Jason Pierre-Paul while primarily being expected to contribute on special teams as a rookie, was Tampa Bay’s first-round pick — No. 32 overall.

And those are just the wide receivers and tight ends. Leonard Fournette, Ronald Jones and Ke’Shawn Vaughn return at running back, where veteran Giovani Bernard was added to the mix in free agency last month.

“This is a great place to come and be groomed,” Licht said of the selection of Trask with the last pick of the second round.

The GM just as well could have been talking about any of Tampa Bay’s additions, regardless of position.

“We have the luxury of developing these guys into their future roles,” the GM said. “We feel really good about that.”

A week before the draft, Licht said if the Bucs elected to pick a quarterback it would be important that the prospect be one who could come in with the right mind-set and embrace the opportunity to learn from Brady and other veteran quarterbacks.

Trask has shown he can handle similar circumstances. He was a backup in high school to current University of Miami starter D’Eriq King in his hometown of Manvel, Texas, and slowly climbed the depth chart at Florida before finally getting his shot with the Gators.

“In today’s day, everybody transfers. Things don’t go right, you transfer,” coach Bruce Arians said. “He hung in there and fought it out.”

Trask knows some draft analysts question how good he can be as a pro.

“That was a big question mark that people had on me in college and I feel I proved them all wrong. ... I feel very confident in my ability to play on any stage,’’ he said, “and I’m just continuing to work out, learn the game and further my knowledge.”

The Bucs made one trade during the draft, sending a sixth-round pick to the Seattle Seahawks for the opportunity to move eight spots in the fourth round to select Darden, the North Texas career receiving leader.

Auburn linebacker K.J. Britt was added in the fifth round. The seventh round brought BYU cornerback Chris Wilcox and Houston linebacker Grant Stuard, the last player selected in the draft.

The emphasis on the final day was on adding speed and improving special teams.

“We feel pretty good about what we’ve done,” Licht said.

As the final pick of the draft, No. 259 overall, Stuard is this year’s “Mr. Irrelevant,” — the title bestowed on the player selected last.

Licht noted the young linebacker has not traveled an easy road to the NFL.

“He’s had a little bit of a tough life. He’s been taking care of his siblings. He’s a very mature person, very accountable person and a very accountable football player,” Licht said. “Guys who can deal with and get through tough times and adversity, that’s a big box to check for us.”

Stuard is grateful for the opportunity.

“It means a whole lot. I can tell you as soon as I heard my name called that it all kind of came at once. Just the memories of the various struggles, just going through it with my siblings, with my family, living in different homes, living away from my siblings, all the type of things that have been difficult for me in my life,” Stuard said.

He added one of his biggest goals is to be a positive example and role model for his four siblings.

“Now they see that no matter what adversity, you can still reach your goals,” Stuard added. “There’s still an opportunity for you there if you continue to work hard and do what you’re supposed to.”