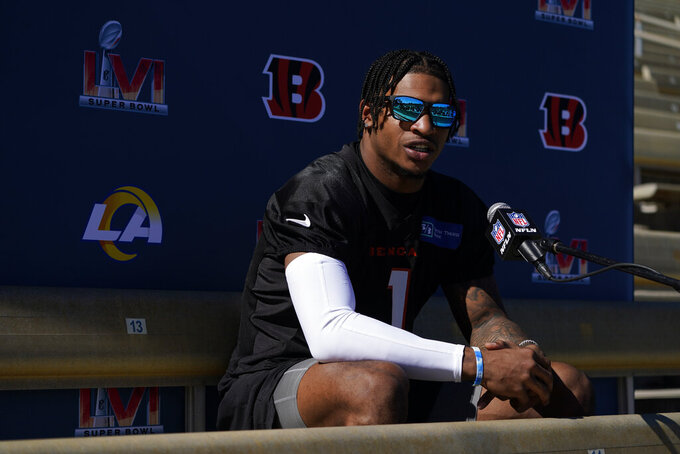 LOS ANGELES (AP) — Ja'Marr Chase has turned in quite the debut season, rewriting Cincinnati rookie records, earning a Pro Bowl nod, and now scratching off another goal to earn the AP NFL Offensive Rookie of the Year award.

“I put it on my wall ... got that accomplishment, and that's more than I can ask for,” Chase said Friday, perched with his right leg over a bleacher in the stands at Drake Stadium on the UCLA campus. “I'm blessed to be in this situation."

Next up, Chase can do something he couldn't imagine enough to even put on a to-do list. On Sunday, he can help the Bengals win the franchise’s first Super Bowl. The receiver from New Orleans says he never had a general plan to play in the Super Bowl growing up.

“My dream was always to make the NFL,” Chase said. “That was my main dream. It was never to like, ‘Win a game, make this catch.’ It was just to make it to the NFL, you know? That was my biggest dream. And once I got here, it was finally like what’s the next step?”

Basketball was his first sport until he was 9. Then he picked up a loose ball and scored a touchdown, convincing Chase to switch to offense. He teamed up with Joe Burrow to win a national championship at LSU. Once reunited with the Bengals, Chase says he expected to eventually reach a Super Bowl.

Just not this soon.

"Once I knew I was getting with Joe, I knew we were going to be great, so it just was earlier than I thought,” Chase said.

Chase won the Offensive Rookie of the Year award with 81 catches for 1,455 yards and 13 touchdown catches. All the most ever by a Bengals rookie. He had five 100-yard receiving games. Chase already has set the postseason record for rookies with 279 yards receiving. If he has at least 110 yards Sunday, he would top Torry Holt’s single-game Super Bowl record for rookies.

Part of that production came from the simple fact of putting down his goals on paper.

“To see it's been done, you know it just feels like a weight's been lifted off your shoulders,” Chase said. “You know what I'm saying?”

Chase, who said he plans on staying in his hotel room until it's time to head to SoFi Stadium on Sunday, was very relaxed talking to reporters throughout a 45-minute session. He was surprised when told time was up.

He laughed at a question on how he would defend himself if he were Rams cornerback Jalen Ramsey.

Turning serious, Chase made clear he's looking forward to going against the three-time All Pro.

“It’s a matchup I’ve been waiting for," Chase said. “I’m excited about it and I know he is, too. He’s studying me. I’m studying him. We're both trying to find flaws right now, so it should be a great game. I’m excited to get out there and just go.”

Now, the goal is big enough it doesn't need to be written down. Just go win a Super Bowl, tapping his experience of helping LSU win a title on college football's biggest stage to help him with his next game. Chase said that would make a great year even better.

Burrow wrapped up his second NFL season as the AP NFL Comeback Player of the Year, recovering from the torn ACL that ended his rookie season. With Chase only a year into his career, the receiver sees this as a special experience.

Chase intends to leave his mark on the NFL, though he hasn't thought about what that legacy could be.

“I’m just in the moment living it and trying to build it as I go on ...” Chase said. "Man, so much going on in my life, and I just want to enjoy this experience that I’m having.”