Super Bowl-or-bust Saints have plenty to improve on 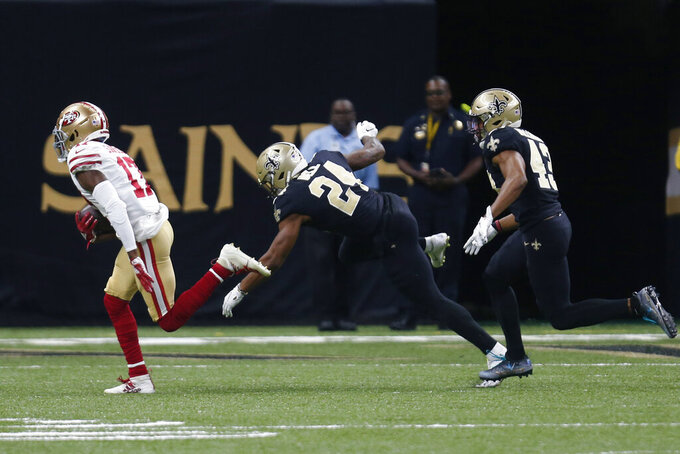 NEW ORLEANS (AP) — Saints coach Sean Payton had no interest in emphasizing the positives in a thrilling 48-46 loss that came down to the final seconds against the team with the best record in the NFC.

“We can’t kid ourselves,” Payton said Monday after analyzing video of New Orleans' loss to San Francisco. "We have to play a lot better. We have to coach a lot better.”

That tends to be the message when it's Super Bowl or bust.

New Orleans is already the NFC South Division winner for the third season in a row and came agonizingly close to winning the conference title last season. And the Saints (10-3) had the inside track to the NFC's top playoff seeding until they fell to the 49ers (11-2) on a field goal as time expired.

For most of the season, the Saints have been able to rely on their defense to keep them in games. They even beat the Dallas Cowboys without scoring a touchdown in Week 4, when star quarterback Drew Brees was in the midst of a five-game absence caused by his thumb injury.

But Payton wasn't ready to give his defense a pass for what happened on the Saints' home field against the Niners on Sunday.

“We gave up 48 points as a defense, so that should speak for itself,” Tuttle said, adding that the breakdowns ranged from missed assignments and miscommunication among teammates to individuals' failure to engage their own matchups with proper technique.

“We knew we had a bunch of mistakes to correct after playing the game yesterday,” Tuttle said. "So, it’s just watching film, seeing your mistakes and correcting it as a professional so it doesn’t happen twice.”

The passing game often has led the way since the Payton-Brees era began in New Orleans in 2006. Against a Niners defensive front that ranks among the NFL's best with 45 sacks, Brees threw for 349 yards and five touchdowns without being sacked or intercepted. Saints left tackle Terron Armstead returned from an ankle injury that had sidelined him one game and felt he held up well. He wore a walking boot on his left foot on Monday, but said that was a regular part of his recuperation after playing at less than full health.

The pass defense. That's likely why the Niners elected to pass on a fourth-and-2 play in the final minute. Not only did the short pass to tight end George Kittle result in a first down, but Kittle turned it into a 39-yard gain that set up the winning field goal.

“They beat our corners, they beat our safeties and we didn't have much of a pass rush to affect the passers,” Payton said. “So all those combinations aren't very good.”

Rookie kick returner Deonte Harris has been granted more freedom to return kickoffs out of the end zone because he consistently gets close to the 25-yard line and regularly seems to be on the brink of breaking a big gain. His elusiveness in space also has led Payton to periodically feature him on certain offensive plays, such as an end-around or screen. Harris' highlights against San Francisco included a 51-yard kick return and 25-yard punt return to go with a 13-yard reception and an 8-yard run.

Free safety Marcus Williams was beaten on Niners receiver Emmanuel Sanders' 75-yard touchdown. His missed tackle on Deebo Samuel's short crossing route allowed Samuel to break loose for a 25-yard gain. He also was called for a facemask on Kittle's last catch, which helped San Francisco net 53 yards on the play that set up the winning field goal.

“We have, quite honestly, to play better at the deep safety position,” Payton said.

The Saints lost a pair of defensive linemen during the game: end Marcus Davenport (foot) and tackle Sheldon Rankins (ankle). Payton did not provide any updates on Monday, as is his practice until official injury reports are released later in the week.

1 — The number of fumbles the Saints have lost on offense this season. It happened against the 49ers when running back Alvin Kamara was stripped by D.J. Jones and DeForest Buckner recovered on the New Orleans 20. The Saints have lost only two fumbles all season, the other coming on a muffed punt.

The Saints host Indianapolis on Monday night before finishing with a pair of road games at Tennessee and Carolina. All three games could be critical to keeping the Saints in position for a first-round bye — and the top seed isn't out of the question quite yet.