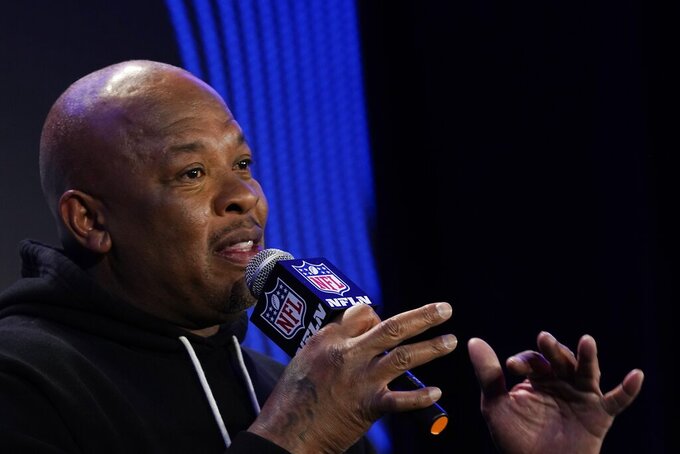 “We’re going to open more doors for hip-hop artists in the future and making sure that the NFL understands that this is what it should have been long time ago," Dre said at a moderated appearance the trio made Thursday without their Sunday co-headliners Kendrick Lamar and Eminem.

“It's crazy that it took all of this time for us to be recognized,” Dre said. “I think we're going to do a fantastic job. We're going to do it so big that they can't deny us anymore in the future.”

No reporters were allowed to ask questions, unlike in previous years.

“We appreciate the NFL for even entertaining hip-hop because we know a lot of people that don’t want hip-hop onstage," he said. “But we’re here now and there’s nothing you can do about it.”

Dre said there will be surprises during their show, but he's already added two deaf musicians — Warren “Wawa” Snipe and Sean Forbes. It'll be the first time deaf performers will take part in the halftime show.

Wawa and Forbes will use their hands, body and facial expressions to deliver unique renditions of the songs in American Sign Language as the superstar performers rap and sing on stage.

The five music artists set for Sunday's show have a combined 44 Grammys. Eminem has the most with 15. Blige is the only return performer among the group — she was part of an ensemble cast that featured Aerosmith, NSYNC, Britney Spears and Nelly back in 2001.

Dre emerged from the West Coast gangster rap scene alongside Eazy-E and Ice Cube to help form the group N.W.A., which made a major mark in the hip-hop culture and music industry with controversial lyrics in the late 1980s. Dre is responsible for promoting rap stars such as Snoop Dogg, Eminem, 50 Cent and Lamar. Dre also produced Blige's No. 1 hit song “Family Affair.”

The game and halftime show will air live on NBC.