Sure sign of pandemic: Cowboys cope with Texas heat for camp 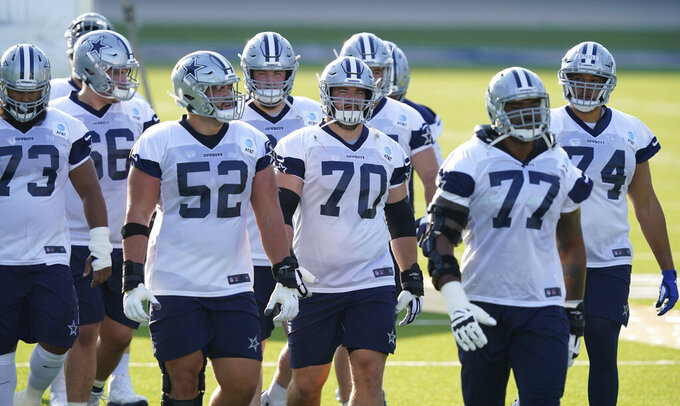 FRISCO, Texas (AP) — Mike McCarthy wore a mask for parts of his first practice as coach of the Dallas Cowboys, while most players disappeared during breaks into air-conditioned tents.

The first Cowboys training camp to be held entirely in the Dallas area opened with obvious signs of the pandemic. The most glaring was the location — Texas smack dab in the middle of summer instead of much cooler Southern California.

Dallas had to stay home because the NFL banned remote camps this year out of concern for the coronavirus. While the Cowboys finished their morning workout several hours before the temperature soared past 100 degrees on one of the hottest days of the year, they still noticed the break rooms. And they appreciated them.

“They’ve got Popsicles in there,” center Joe Looney said. “They’ve got water, Gatorade. I’m a big guy with a bunch of hair, so I need it. I’ve been in there dumping water on my head and I think it’s wonderful.”

The Cowboys spent the past eight summers in Oxnard, California, practicing whenever they wanted because the temperature at their training facility almost never gets out of the 70s.

They have an indoor option at their sprawling headquarters in Frisco, 30 miles north of Dallas, but McCarthy says he wants to use the outdoor grass field as much as possible.

So that's where Dak Prescott threw some of his first passes in a red No. 4 jersey — one of the differences from the previous decade under Jason Garrett — to receiver CeeDee Lamb. The rookie first-round pick had one of the highlights with a one-handed grab, although he fumbled on another catch not long after that.

Ezekiel Elliott went through a camp practice for the first time since 2018. The two-time rushing champion missed the entire offseason last year in a holdout. Promising second-year back Tony Pollard looked sharp behind Elliott.

And Looney is the starting center, just as he was two years ago when Travis Frederick missed the entire season because of a nerve disorder. Frederick returned last year and made his fifth Pro Bowl, but still retired in the offseason.

“We all haven’t played football in eight months,” Looney said. “We’re all visiting each other. The locker room is a brotherhood. You realize how much you miss it by not being around the guys.”

The pandemic kept McCarthy away from his players for almost all of his first seven months on the job. His first meeting in front of the entire team was about two weeks ago — on one side of the 12,000-seat indoor stadium rather than the team meeting room.

Safety Ha Ha Clinton-Dix, one of five incoming free agents expected to play a significant role on defense, spent his first four-plus seasons with McCarthy in Green Bay and was traded to Washington not long before McCarthy was fired by the Packers during his 13th season.

McCarthy, who didn't talk to reporters on the day of his first practice, has downplayed the effect of the pandemic on the implementation of his program. There are three holdovers from Garrett's staff, led by offensive coordinator Kellen Moore.

“I thought our communication network was outstanding and frankly you can see it once the players arrived here,” McCarthy said two days before the first practice. “You didn’t feel like you missed a whole lot when it came to the playbook and also the connection the new coaches were able to make with their specific players.”

Now the seventh-year pro is preparing for his first season without Garrett and Rod Marinelli, who was the defensive coordinator and Lawrence's position coach. Marinelli is now the defensive line coach with the Las Vegas Raiders.

“What we have to focus on is being respectful of each other and understand that with a new coaching staff, you have to be coachable and you have to listen,” said Lawrence, who is looking to bounce back from a five-sack season that followed consecutive years with double-digit sacks. “I believe everybody wants the same thing out of each other.”

They look forward to seeing each other in the break rooms, too.