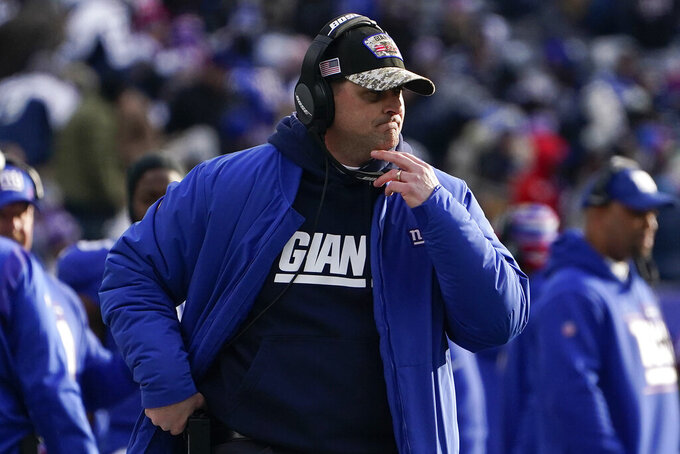 BETTING LINE: Eagles by 10, according to FanDuel SportsBook.

TURNOVER DIFFERENTIAL: Giants minus-1, Eagles minus-2.

GIANTS PLAYER TO WATCH: QB Jake Fromm. The second-year pro, who was signed after Daniel Jones was hurt in the last game against the Eagles, finally made his NFL debut last weekend. The Georgia product played the team’s last series and hit 6 of 12 passes for 82 yards. He's likely to see action with veteran backup Mike Glennon struggling.

EAGLES PLAYER TO WATCH: TE Dallas Goedert has 13 catches for 240 yards over his past two games. He has become a focal point in the passing game since the Eagles traded Zach Ertz to Arizona. Goedert was held to one catch for no yards in the first Eagles-Giants meeting.

KEY MATCHUP: Philadelphia offensive line vs. New York defensive line in the run game. The Eagles ran for 208 yards in the first meeting, but turned over the ball four times and lost.

SERIES NOTES: The Giants have won two straight. Before that, the Eagles had won 12 of 13. A Giants win would tie the long-time series.

STATS AND STUFF: The Giants have lost five straight on the road. ... The six points last week tied the fewest the Giants have scored in a game in coach Joe Judge’s two seasons. They dropped a 20-6 decision to Cleveland last season. ... New York has failed to pass for 200 yards in six straight games. ... The Giants' four turnovers last week tied a season high. ... RB Saquon Barkley lost a fumble for the first time in his four-year career. It happened on a run against Dallas on his 791st touch, including 606 carries. ... RB Devontae Booker ran for 74 yards against Dallas and has at least 80 yards from scrimmage in the last two outings. ... WR Kenny Golladay had a season-high 53-yards receiving against Dallas. ... TE Evan Engram had four catches last week and now leads the team with 40. He has had at least five catches in his last two games against Philadelphia. ... Rookie LB Azeez Ojulari had a half-sack against the Cowboys, giving him a team-high eight, third among rookies. ... Xavier McKinney is tied for first among safeties with five interceptions. He had a pick against Philadelphia last month. ... Second-year LB Tae Crowder had 12 tackles against Dallas and leads the team with 108. ... LB Lorenzo Carter is coming off a career game with two sacks and a forced fumble. ... CB Julian Love had a season-high 10 tackles last week. He had a fumble recovery against the Eagles on Nov. 28. ... Eagles QB Jalen Hurts leads the league with 96 explosive plays, defined as 16-yards-plus pass plays and 10-yards-plus run plays. His 10 rushing touchdowns this season are the most ever by an Eagles quarterback … Since his Week 11 return from IR, RB Miles Sanders leads the NFL at 6.1 yards per carry, among runners with at least five carries during that span … Eagles C Jason Kelce and CB Darius Slay were voted to the Pro Bowl … The Eagles have won four of five (losing only to the Giants) and five of seven since a 2-5 start.

FANTASY TIP: Eagles RB Sanders is coming off consecutive 100-yard games and is due to score his first TD of the season.