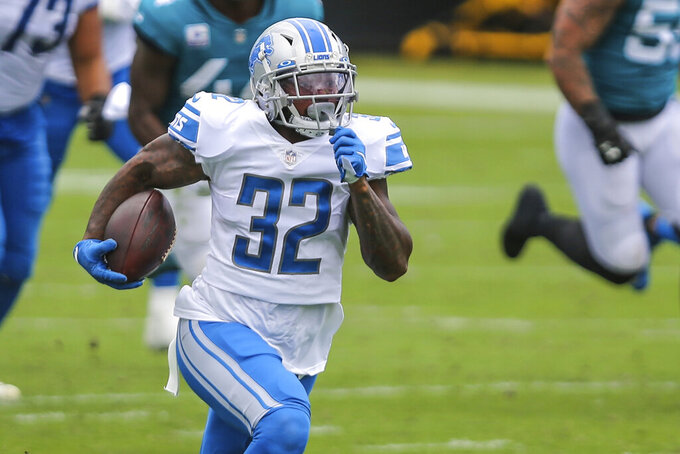 FILE- In this Sunday, Oct. 18, 2020, file photo, Detroit Lions running back D'Andre Swift (32) carries the ball during an NFL football game against the Jacksonville Jaguars in Jacksonville, Fla. The Detroit Lions are hosting the Indianapolis Colts hoping to win three straight games for the first time in three seasons under coach Matt Patricia. The Colts are aiming to improve to 3-0 coming off bye weeks with coach Frank Reich. (AP Photo/Gary McCullough, File)

DETROIT (AP) — The Detroit Lions have changed the conversation about their team by beating bad teams, the one-win Atlanta Falcons and Jacksonville Jaguars.

The Lions (3-3) have won consecutive games for the first time in more than a year. And if they can win three straight and earn a winning record in November for the first time under coach Matt Patricia, they might merit more of a buzz.

That's because a victory as slight underdogs against the Indianapolis Colts (4-2) on Sunday at Ford Field would be respected by even their harshest critics.

The Colts are rested after being idle last week. They are aiming to improve to 3-0 after a bye under coach Frank Reich, who was hired just days after Patricia in 2018.

Reich said even though his team was able to get relatively healthy during its break, Detroit presents a tough test.

“Feel like this team is hot on offense, scoring a lot of points, stout on defense,” he said.

Detroit scored first in each of his first six games and has 48 points in the first quarter, ranking third in the league.

The Colts have gotten off to slow starts in their last two games and it cost them once. Indy fell behind 21-0 the Cincinnati Bengals and trailed 24-7 at halftime in its last game before rallying to win. The Colts could not overcome a 20-10 halftime deficit the previous week in a setback at Cleveland.

ROOKIES ON THE RUN

Both teams drafted a dynamic running back and each has had some success.

Detroit drafted Georgia's D'Andre Swift with the No. 35 pick overall. Swift has become more involved with the game plan lately, running for 116 yards and two touchdowns two weeks ago against the Jaguars and scoring four times in four games.

The Colts selected Jonathan Taylor out of Wisconsin a little later in the second round, No. 41 overall. He is one of three rookies with 500-plus yards from scrimmage and three rushing scores. Taylor had a career-high 115 yards from scrimmage in his last game, a win over the Bengals.

“You saw all the stuff that you saw coming out,” Patricia said. “Certainly his power, his explosiveness, you see his speed.”

Kenny Golladay, who led the league with 11 receiving touchdowns last season, has gotten into a groove lately for the Lions. He had at least 100 yards receiving in his last two games after scoring in his first two games following a two-week absence, recovering from a hamstring injury.

Marcus Johnson, meanwhile, has developed into a big-play receiver out of nowhere for the Colts after being among their final cuts in September. The 26-year-old receiver had career highs with five receptions and 108 yards receiving in the win over Cincinnati and has a catch of 25-plus yards in three straight games.

“Marcus is explosive,” Reich said. “The second thing is just the ability to make a 50-50 catch.”

The Colts are averaging an NFL-low 3.59 per carry, but Reich doesn't sound ready to pass more with Philip Rivers to open up the run.

“We just need to keep calling it,” Reich said. “We need to keep getting in the right situations to call it and just keep trusting our guys to do what we know they can do.”

The Detroit Lions are allowing a limited number of spectators to watch them play at Ford Field for the first time this season. The capacity for guests of coaches and players will be capped at 500 because of the COVID-19 pandemic.