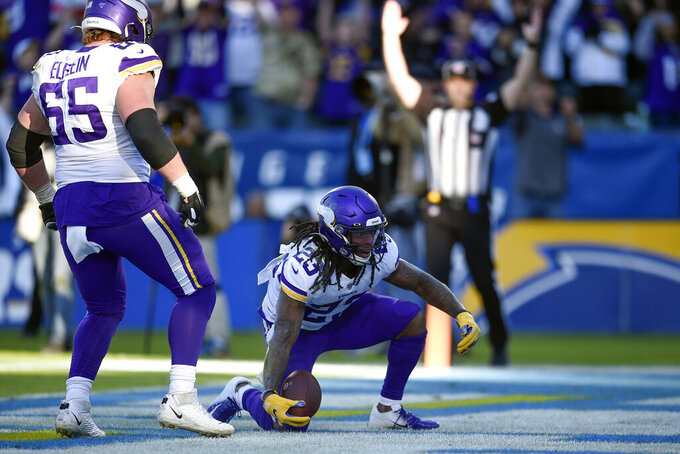 Minnesota Vikings running back Mike Boone, right, reacts with teammates after scoring a touchdown during the second half of an NFL football game against the Los Angeles Chargers, Sunday, Dec. 15, 2019, in Carson, Calif. (AP Photo/Kelvin Kuo)

EAGAN, Minn. (AP) — When the Minnesota Vikings lost at Chicago in Week 4, there were plenty of questions about a team expected to be a playoff contender and an offense led by quarterback Kirk Cousins.

Minnesota was 2-2, after losing on the road at Green Bay and Chicago. The offense scored six points and totaled just 222 yards against the Bears. Receiver Stefon Diggs created further disruption when he skipped a practice the following week.

Since then, the Vikings have won eight of 10 games with the only losses on the road against teams that have already clinched a playoff berth; Kansas City and Seattle. Minnesota further solidified its playoff positioning with a convincing 39-10 win at the Los Angeles Chargers on Sunday in which the defense forced seven turnovers.

Any early season uncertainty has been replaced by understated confidence.

“I like this team. I like how they’re playing,” Vikings coach Mike Zimmer said Monday. “I think the quarterback is playing really well. I think we’re doing a good job scheming offensively. Defensively we’ve played a little bit better the last couple of weeks. If we can ever get it to the point where I really feel good about it, we could do some damage.”

Minnesota (10-4) is one win – or one Los Angeles Rams loss – away from clinching a playoff berth as it sits comfortably as the sixth seed in the NFC after Los Angeles (8-6) lost at Dallas on Sunday. The Vikings could climb to No. 5 in the conference if they win both of their final two games, at home against Green Bay and Chicago, and San Francisco (11-3) loses at home to the Rams and on the road at Seattle (11-3).

The early road loss to the Packers leaves winning the NFC North as a distant possibility because of tiebreakers. Minnesota would need to win both games and have Green Bay (11-3) lose its season finale at Detroit.

“It’s still all up for grabs,” Cousins said after Sunday’s win. "We’ve put ourselves in a position to have a lot to play for these last two games. Ten wins is a good place to be, but there’s a better place to be and that’d be 11 or 12. That’s what we’re chasing.”

Minnesota’s special teams had one of its best games of the season Sunday against the Chargers. Kicker Dan Bailey missed an extra-point attempt, his fourth miss in 42 tries this season, after the Vikings scored on their first possession.

Bailey came back to hit four field goals in the game, continuing his strong season where he’s 22 of 24 and fifth in the league with a 91.7% conversion rate. He also hit his final PAT in the game.

Britton Colquitt averaged 51.5 yards per punt and placed both of his punts inside the 5-yard line. He is the only qualifying punter in the NFL to not record a touchback this season.

It feels like nitpicking, but Minnesota could have put Sunday’s game away much earlier by capitalizing on turnovers. Aside from Ifeadi Odenigbo’s fumble recovery for a touchdown, the Vikings totaled six points off three other turnovers through three quarters.

Even after Eric Wilson’s blocked punt that gave Minnesota the ball at the Los Angeles 41-yard line, the Vikings settled for another field goal. Five times with the ball inside the Chargers 30-yard line in the second and third quarters, Minnesota had four field goals and an interception.

In all, the Vikings scored 20 points off the seven turnovers.

Second-year running back Mike Boone had eight carries total this season when Dalvin Cook was injured early in the third quarter. With backup Alexander Mattison also out, Boone responded with 13 carries for 56 yards and two touchdowns. The carries and yards were career highs in a game and the touchdowns were the first of his career.

Boone was undrafted last year out of Cincinnati and has kept his place on the roster with special teams work.

“I really felt like for a couple weeks, Boone’s been wanting to have a chip on his shoulder the way he’s been running, showing in practice and the things that he’s been doing,” Zimmer said.

Cook is still having the best season of his career with 1,135 rushing yards to go with 53 catches for 519 yards, but injuries have crept up. He left Sunday’s game with a shoulder injury and did not return.

It’s the second straight game cut short by an injury for Cook, who doesn’t have a 100-yard rushing day since Week 7 at Detroit. In the past six games, he’s averaged 3.32 yards per carry after averaging 5.28 per carry in the first eight games.

Cook will be the injury to watch this week. He left Sunday’s game with a shoulder injury after being on the injury report for a chest injury previously. Zimmer said Monday that it’s an injury Cook might be able to play through and said Cook “feels good today.”

Mattison was held out of Sunday’s game with an ankle injury. He didn’t practice at all last week, so Boone could get the call again next week.

Cornerback Xavier Rhodes left Sunday’s game with a calf injury but later returned. He played just 14 snaps in the game, but Zimmer said Monday that the injuries weren’t the reason for the limited playing time.

“That was just the plan going in,” Zimmer said.

11 – After the seven takeaways on Sunday, and just one turnover on Cousins’ interception, Minnesota is now plus-11 in turnover margin this season.

There’s no need to look ahead or around the league. Schedule makers have placed Green Bay in the Vikings’ path as the two play on Monday night in Minnesota.

“What’s important is beating the Packers and were not going to spend time and energy thinking about all that’s out of our control,” Cousins said. “We have plenty in our control and we will focus on that.”