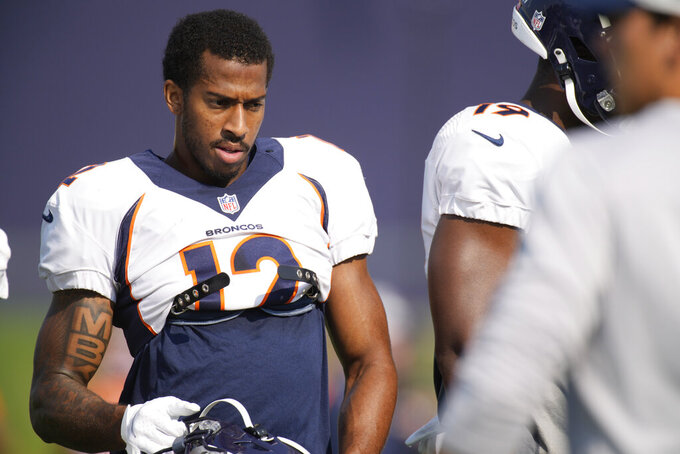 ENGLEWOOD, Colo. (AP) — Drew Lock and Teddy Bridgewater know that whichever one wins Denver's starting quarterback job will have what could be the NFL's deepest wide receiving corps.

All of them powered through uneven training camp performances from Denver's erratic passers.

Jeudy showed much better hands to go with his celebrated route running. Patrick was his usual reliable self, drawing inquiries about his potential availability on the trade market. Sutton showed signs of regaining his Pro Bowl form in his return from a knee injury and Hamler showed off his speed with an 80-yard touchdown grab in the Broncos' preseason opener.

So, which receiver was the most consistently spectacular this summer?

Benson spent the last two seasons on Denver's practice squad after shining in training camp — but not like this.

He's alternately showed off terrific hands like when he high-pointed a seemingly unreachable pass over two defenders last week and his sneaky speed.

Benson kept shining on game day, too, leading the Broncos with four catches for 36 yards and two touchdowns in Denver's 33-6 win at Minnesota in their exhibition opener last weekend.

All this isn't to suggest he's done enough to nudge his way onto the 53-man roster just yet.

“Continue that good play,” is what he'll have to do to survive final cuts, coach Vic Fangio said as the Broncos prepared for their second preseason game, at Seattle on Saturday night.

What everyone saw last week was Benson catching touchdown passes from both Lock and Bridgewater in Denver's exhibition win over the Vikings.

Benson has no problem with Fangio's admonition, saying that's been his goal all along.

“Just play consistent, man. My whole thing coming in was continue to make plays at practice and then when game time comes, make those same plays that I've been making and make sure it all transfers over to the game."

Benson figures he's “popped” this summer because of his experience going up against Denver's top defense two years in a row and being in the second year of Pat Shurmur's offense.

"That allows me to just go out there and play the game that I want to play and play fast like I know I can,” Benson said.

Benson embraces his role as the underdog in Denver's deep receiving corps that's full of first- and second-rounders who hail from Power Five programs.

“I came from the D-2 level, so I always come out here with a chip on my shoulder just to show that I can play with the big boys,” Benson said.

It's been his lot since high school, when he was undersized at 5-foot-10 and 155 pounds and he never drew a Division I offer.

Now he's 6-foot and 180 pounds and nobody played bigger at Broncos camp, but he knows he has to do more.

He said his goal this weekend and next is "to prove that I'm not a one-hit wonder, that I can stay consistent and continue to make the big plays day in and day out.”