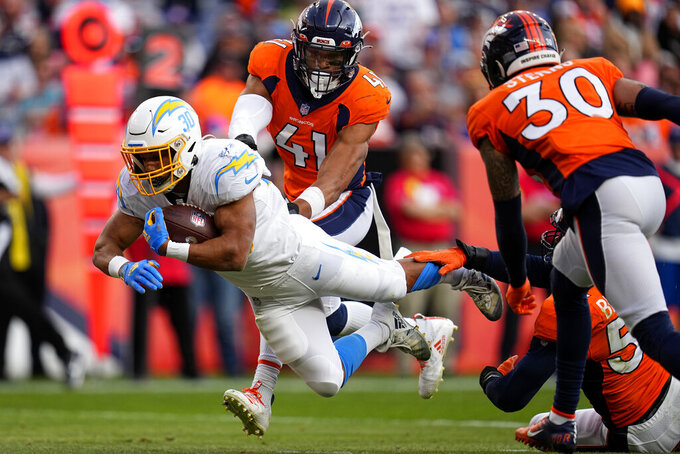 Los Angeles Chargers running back Austin Ekeler (30) dives into the end zone for a touchdown as Denver Broncos inside linebacker Kenny Young (41) defends during the first half of an NFL football game, Sunday, Nov. 28, 2021, in Denver. (AP Photo/Jack Dempsey)

DENVER (AP) — Pat Surtain II showed off not only his sticky hands but his swift feet.

The rookie from Alabama picked off Justin Herbert twice, returning the second one 70 yards for a touchdown and sparking the Denver Broncos' 28-13 win over the Los Angeles Chargers on Sunday.

Surtain reached a top speed of 22.07 mph on his pick-6, according to Next Gen Stats, the fastest by a defensive back with the ball in his hands in the last five years.

“I've always known I was fast,” said Surtain. “I used to run track, so I would say that little track background helped me a lot.”

The Broncos' big win sets up a showdown for the AFC West lead next weekend in Kansas City, where the game between Denver (6-5) and the Chiefs (7-4) already was flexed to Sunday night.

“No matter what happens," said safety Justin Simmons, "we've got to find a way to leave Arrowhead with a win," something the Broncos haven't done since 2015.

Surtain's first interception came in the end zone on a pass intended for tight end Jared Cook early in the fourth quarter. The Broncos converted that takeaway into a touchdown when Teddy Bridgewater hit tight end Eric Saubert from 9 yards to make it 21-7.

His second one came off the hands of Austin Ekeler, who watched helplessly as Surtain sprinted past him and down the Broncos' jubilant sideline to push Denver's lead to 28-7 with 7:28 left.

“They do a great job of disguising everything and they're really well coached,” said Herbert, who finished 28 for 44 for 303 yards and two TDs with two interceptions and three sacks. “When you put together a really good coach like that with some pretty exceptional players, you get a really good defense.

"We can’t expect to win if you turn the ball over like that.”

Bridgewater returned after halftime and the Broncos closed out the win by running the ball behind a makeshift line, finishing with 147 yards rushing against the league's leakiest run defense.

The Chargers' first two drives of the second half consisted of two dozen plays and ate up 14 minutes, 15 seconds. Both were fruitless.

Dustin Hopkins missed his first field goal attempt with the Chargers, hooking a 52-yarder wide left after an 11-play opening drive that took 7:06.

The Broncos went three-and-out and the Chargers ate up the rest of the clock in the third quarter, when Denver had the ball for just 75 seconds. But on third down from the Broncos 23, Surtain got his first interception of Herbert.

Drew Lock replaced Bridgewater in the first half and was picked off by Derwin James Jr. when he tried to fit in a pass to a bracketed Kendall Hinton in the closing minutes of the first half. That led to Herbert's 12-yard touchdown toss to Ekeler with 31 seconds left before halftime, cutting the Chargers' deficit to 14-7.

Cook outjumped several defenders and even a teammate or two to get both feet down on a 16-yard touchdown catch that made it 28-13 with 4:34 remaining. But the Chargers inexplicably went for 2 and the pass was incomplete.

Before getting hurt, Bridgewater's 11-yard scramble to the right pylon put Denver ahead 7-0. When the Broncos began their next drive, they replaced Risner with Netane Muti. Bridgewater was injured when James swept through untouched on a blitz and blindsided the quarterback.

It was originally ruled a strip-sack with teammate Kyzir White recovering the loose ball for Los Angeles, but that turnover was overturned on review. Lock led the Broncos' offense back on the field while Bridgewater was tended to on the sideline.

Joey Bosa got a strip-sack on Lock's second snap, but receiver Tim Patrick recovered the loose ball for a first down. The Broncos went ahead 14-0 on rookie running back Javonte Williams' 9-yard burst up the middle.

Denver's win means every team in the division has a winning record after 12 weeks.

“The AFC is still wide open,” James said. “We’re 6-5 right now and everyone in the AFC pretty much has the same record as us. Everything we want is still there.”

Running back Melvin Gordon gained 83 yards on 17 carries against his former team and Williams gained 54 yards on 14 runs, adding 57 yards on three catches.

Broncos: visit the Chiefs on Dec. 5.